Sources: Coke to Take on LaCroix and Bubly With Sparkling Water Launch

Coca-Cola is fast at work on a plan to compete more directly with National Beverage’s LaCroix and PepsiCo’s Bubly in the growing sparkling water category, according to multiple sources. Options that have been under development include the introduction of a new sparkling water brand or a US launch of Fresca Sparkling Soda Water, which is sold already in Canada (pictured below). The most likely packaging would be standard 12- oz cans in traditional 12-pack cartons (arranged three cans by four). Coke’s entrant is expected to be launched by Q4 of this year or Q1 of next year, according to a source. The goal would be to get the product into distribution by February, before major national retailers reset store shelves.

With sales of Dasani Sparkling in decline (see table below), Coke and its bottlers are concerned that shelf space will be transferred to faster-selling sparkling waters. Target has already delisted Dasani Sparkling nationally (BD 6/28/19). One bottling system source said Dasani Sparkling is “not setting the world on fire” and that LaCroix “still gets lots of space” despite its recent sales declines (table).

Aha. Since May, Coke has trademarked a number of names for a sparkling water product. The most recent names have been “Aha” in June and “Fresca” this month. Other names have included “H’llo Bubbles,” “H’llo Fizz,” “Hiya” and “Hyku.” One source told BD that the name of the new sparkling water will not be H’llo Bubbles and that Aha would be more likely. The sources all said that any final decisions had not yet been communicated by Coke. A Coca-Cola spokesman declined to comment on BD’s reporting or the trademark applications, except to say: “We file hundreds of trademarks each year as part of our ongoing strategy to expand our total beverage portfolio across many brands and categories.” 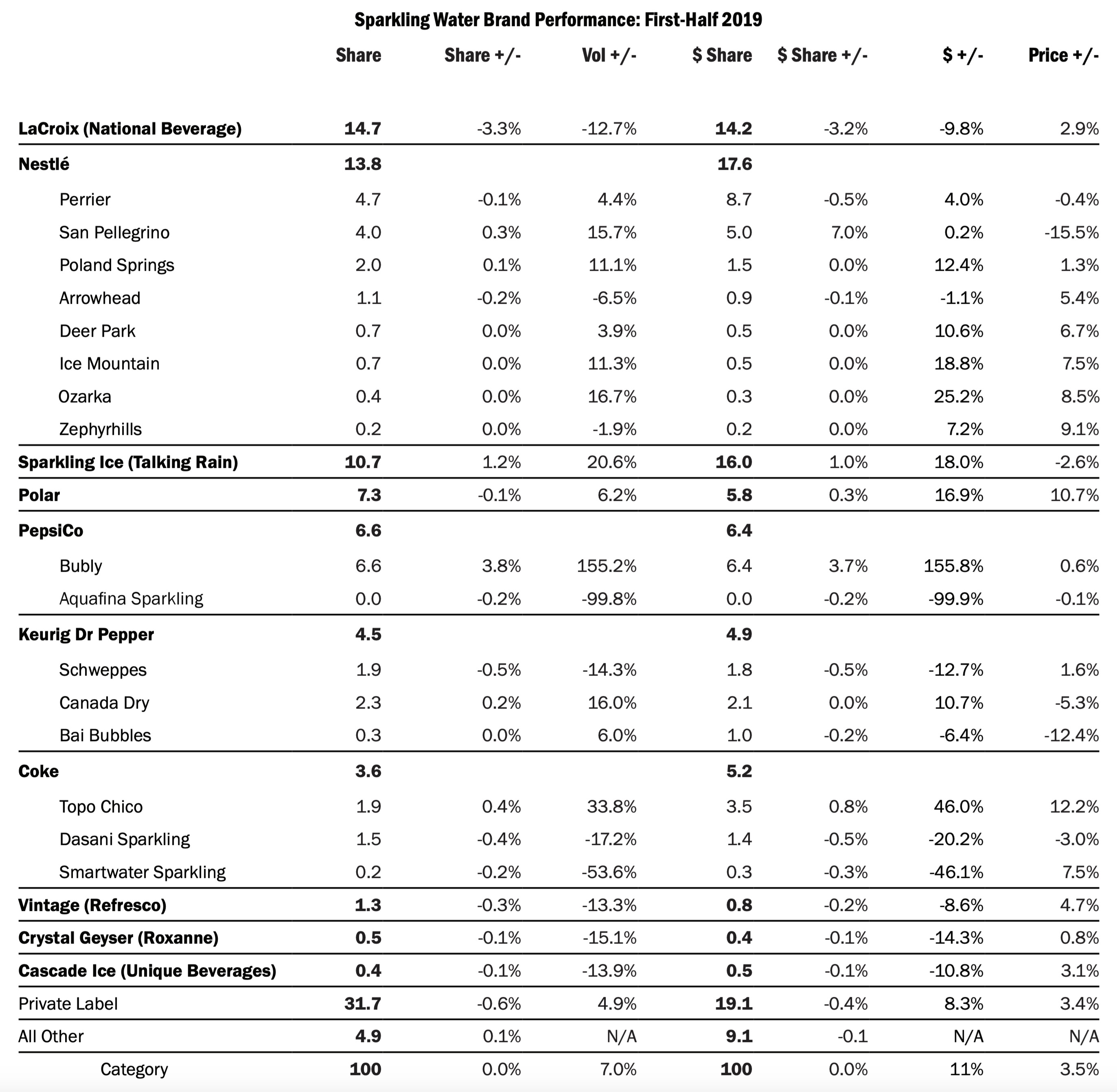 Packaging. According to BD’s sources, the use of a 12-can fridge pack or even slim cans had not been ruled out. Other decisions involve whether to put 12-oz standard cans in 8-packs, like LaCroix and Bubly also offer. There is less capacity within Coke’s bottling system for slim cans than for standard cans, one source said. Another source said that on a per-case basis, margins for sparkling water “are not great” because most of the sales are in future consumption packaging and channels, such as grocery. Therefore, scale and volume would be important.

Perspective. To date, Coke has resisted any urge to go toe-to-toe with market leader LaCroix or PepsiCo’s Bubly. PepsiCo launched its new brand in eight flavors in February 2018 and ran two television ads during the Oscars in March. The brand came back with a Super Bowl ad this year featuring singer Michael Bublé. While the sparkling water category has grown -- fueled by health-conscious consumers looking for less sugar and calories -- there is concern by some industry watchers that the category could become commoditized, in a similar way as still bottled water. (At the same time that it launched Bubly, PepsiCo purchased at-home sparkling water appliance maker SodaStream, giving the company a hedge against commoditization.) As PepsiCo took on Bubly, Coke focused on a premium strategy centered on Dasani Sparkling in 12-oz slim cans, Topo Chico from Mexico and Smartwater Sparkling. The latter two brands weren’t positioned by Coke to take on LaCroix and Bubly directly. One bottling system source said Dasani Sparkling would have needed an image overhaul to become more relevant to today’s sparkling water consumers