A federal judge in Florida has denied a request for a preliminary injunction by Bang Energy-owner Vital Pharmaceuticals (VPX) to stop Monster Beverage from distributing its Reign Total Body Fuel energy drink in its current trade dress. In March, VPX accused Monster of trademark infringement related to the “Reign” name and of improperly adopting Bang Energy’s trade dress (BD 3/29/19). In an Oct. 16 ruling, the judge overseeing the case said VPX “failed to meet any of the elements of a preliminary injunction” relating to the trade dress, adding that such a measure would be an “extraordinary and drastic remedy.” The judge said VPX is unlikely to succeed on the merits of its argument. For one, a jury “could easily find” that Bang Energy’s trade dress is not “inherently distinctive,” the judge said, adding that black 16-oz cans with bright logos have been common for energy drink brands since at least 2002. The judge also said VPX “failed to clearly establish any likelihood of confusion” between Bang and Monster Reign’s trade dress. Injunction denials in trade cases like this aren't unusual. 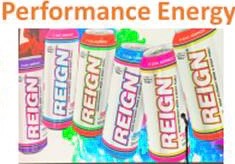 Response. Monster Energy CEO Rodney Sacks did not respond to a request for comment. VPX CEO Jack Owoc sent this by email: “The court was grossly errant in not granting our injunction in what is the most egregious trademark and trade dress violation in recorded US Legal history!” A VPX attorney added that in June Monster was denied a preliminary injunction in its 2018 California lawsuit accusing VPX of false advertising related to Bang’s use of “creatine” and “super creatine.” Monster also claimed in its failed request for an injunction that VPX had intentionally interfered with shelving-space contracts with Monster’s retail partners, according to the ruling.

Reign. While the Oct. 16 ruling did not specifically take up VPX’s claim that Monster infringed the Reign trademark, the judge did indicate in a footnote that Bang failed to meet the burden for a preliminary injunction on that claim, as well. Bang’s Owoc told BD in an email that he will launch his own Reign energy drink in 16- oz cans next month. The product also has been shown in re-sealable bottles, like VPX’s Redline product (BD 10/15/19). Pictured above is a screen grab of VPX's Reign product in cans, as shown by Owoc at a distributor rally held in Atlanta earlier this month. Outside the US, meanwhile, Coca-Cola European has announced the launch of Monster’s Reign product in Europe.

Opinion Mayhem Unleashed. If nothing else, the court ruling is a great example of the energy wars in full bloom. The judge directly quoted consumer comments provided by VPX with words, phrases and text slang such as “shit,” “suckssssss aassss,” and “wtf.” Don’t look for that in a Coke v Pepsi trade dispute anytime soon.