The energy drinks category at US retail last year grew at roughly twice the rate of 2020 by dollars and volume, according to annual data compiled by BD. As shown in the table, dollar sales jumped +15.6% on volume that grew +12.8% and pricing that increased +2.8%. That compares to dollar growth of +6.9% in 2020 (not in table), which was fueled mostly by +6.7% higher volume during the height of the Covid-19 spread in the US. The top- 3 energy drink brands posted double-digit percentage dollar and volume growth in 2021. Monster led on pricing at +1.9%. Red Bull pricing was little changed, and Bang Energy posted a -1.2% pricing decline despite cost inflation for everything from aluminum cans to transportation. Monster has signaled more pricing increases to retailers this year. 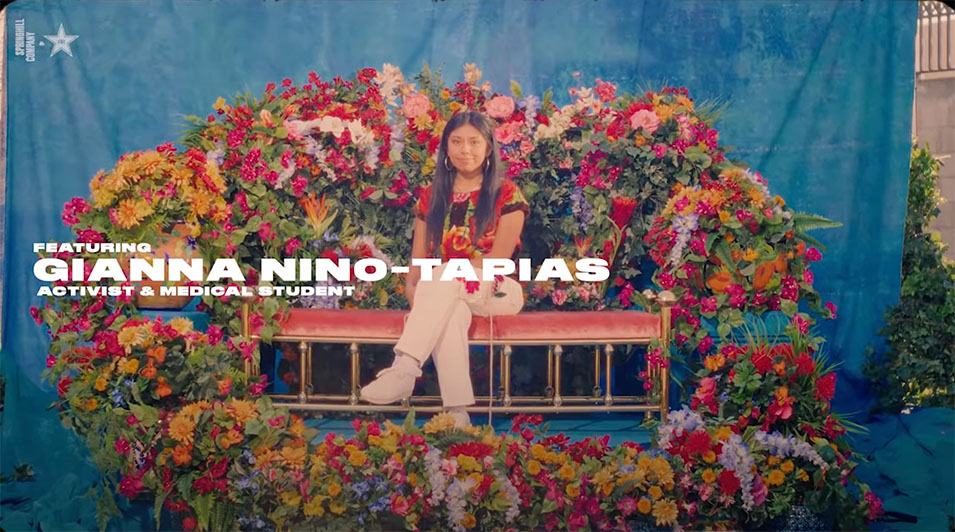 ROCKSTAR FOCUSES ON HISPANIC CONSUMERS. Rockstar Energy’s dollar and volume sales decline accelerated in 2021 even as category growth accelerated. Rockstar declined by about -10% by both measures, as pricing grew less than a half-percent. That came on top of a -8.4% dollar sales decline in 2020. The trend has since improved, however, with significant help from the brand’s no-sugar Pure Zero variant. In the 52 weeks ending this March 12, total Rockstar dollar sales declined by about -2.2%, helped by more than +20% growth from Pure Zero. PepsiCo acquired Rockstar in early 2020 and relaunched it in 2021 with a Super Bowl marketing splash and a more refined focus on music. The increased marketing focus, plus the past year’s pricing inflation likely contributed to the improving result. In an interview, PepsiCo SVP Fabiola Torres, who is general manager and CMO for the company’s energy portfolio, said Rockstar will look this year to connect and “win” with Hispanics. “We definitely don’t want to be the brand that stands for everything,” she said. “It’s not about selling. It’s about engaging. It’s about establishing a relationship, and the business will come.” Last week, Rockstar announced a new partnership and marketing campaign with the SpringHill Company to highlight Hispanic “game changers,” including a medical student whose mother was a migrant farm worker. A short film for the campaign features Mexico-inspired new music from pop artist Snow Tha Product. Looking back at 2021, Torres said Rockstar had to “clean the house” and make sure the product’s liquid, branding, and marketing became “better and better.” The brand also has taken a more “surgical” approach to messaging. While Rockstar is considered a value brand, Torres said the company’s strategy has been to “premiumize” the product with elevated messaging and ingredients such as hemp. “Year one was the kickoff of our relationship with the brand,” she said. “Year two is a year of acceleration.” 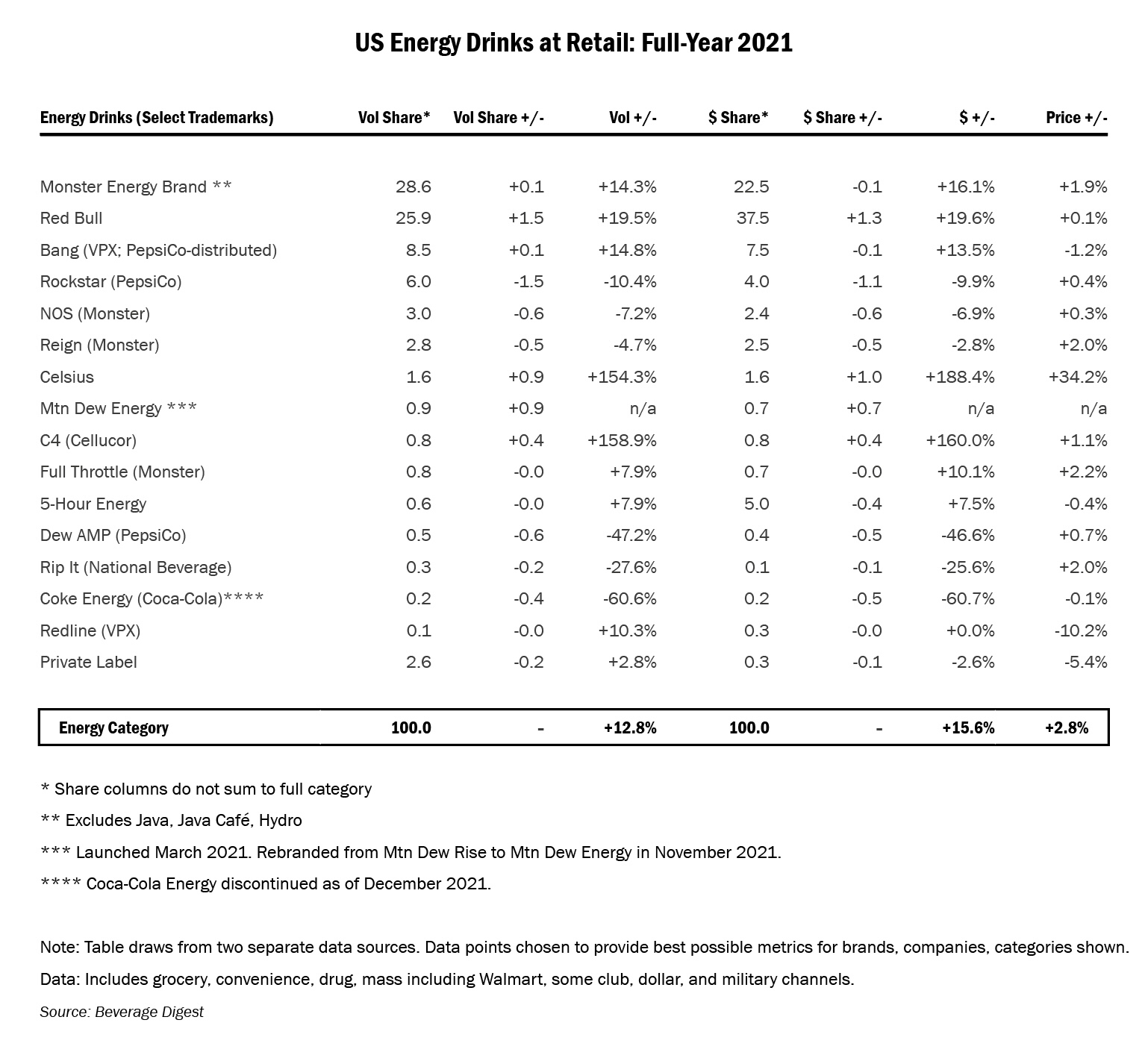 MTN DEW ENERGY. The 2020 acquisition of Rockstar freed PepsiCo from contractual obligations under a previous distribution agreement that barred PepsiCo from launching new energy brands under the Mtn Dew trademark. That opened the door
for Mtn Dew Rise Energy in March 2021, launched to target the morning usage occasion for energy drinks. In November, PepsiCo dropped the word “Rise” following a judge’s trademark ruling in
a case filed by canned coffee maker Rise Brewing. After three quarters on the market, Mtn Dew Energy reached a 0.7 dollar share and a 0.9 volume share. 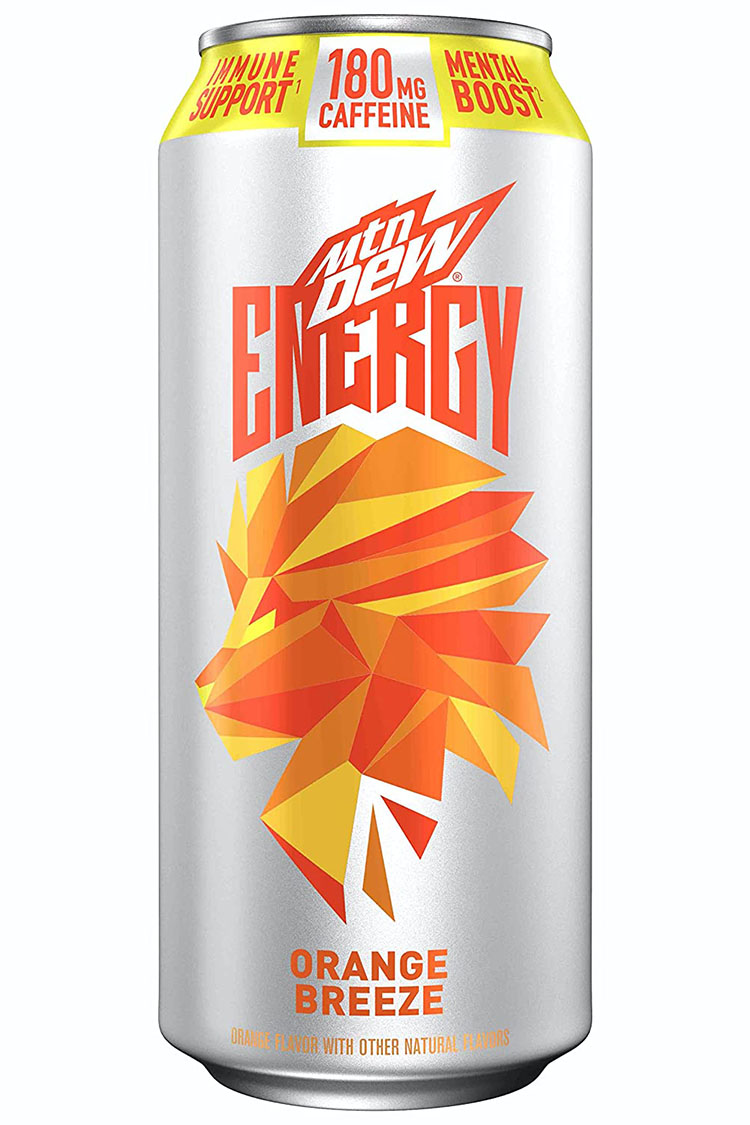 COCA-COLA ENERGY. Coke announced in May that it would
discontinue Coca-Cola Energy by the end of 2021 after
performance fell short. The brand was launched in early 2020 launch just ahead of the Covid-19 spread in the US. The brand reached a 0.7 dollar share in 2020 and ended 2021 with a 0.2 share.

PERFORMANCE. Often referred to as “performance” or “fitness” energy drinks, Celsius and C4 posted strong growth and gained share of the category. Celsius posted a pricing gain that exceeded +34%.