Full-Year 2020 US Energy Results at Retail by Brand

Bang Energy lost volume and dollar share at US retail in 2020 amid the Covid-19 pandemic, distribution disruption, and increased competition. As shown in the table with this story, Bang’s dollar sales fell -1.4% in an energy category that grew +6.9% in 2020. Bang’s prospects for a return to growth this year are unclear as brand owner Vital Pharmaceuticals (VPX) is now mired in a lawsuit and arbitration with its master distributor PepsiCo. Bang has said it will take back Bang distribution in 2023. In December, an arbitrator blocked Bang from taking back the brand immediately. PepsiCo took on Bang in June of last year after signing a deal late last April. Even before that transition, Bang warned some distributors that volume declines could cause the company “to consider revisions to, or the termination of, the distributor relationship,” according to a letter at the time signed by EVP of Sales Gene Bukovi and copied to Bang CEO Jack Owoc. Meanwhile, Reign, Monster Beverage’s BCAA (branched-chain amino acid) answer to Bang in the growing performance energy segment, added share last year and grew sales. Performance brands Celsius and C4 also took share of the energy category.

PEPSICO FOCUS. Rockstar Energy, acquired early last year by PepsiCo, lost volume and dollar share in 2020 as sales fell. The brand had been flagging for years. PepsiCo has since relaunched Rockstar this February. The company is likely to further emphasize Rockstar at retail along with Mtn Dew Rise (see story later in this issue) now that Bang plans to take back distribution in 2023.

BURSTING OUT OF THE RING. Red Bull handily outperformed the US energy category at retail last year, growing dollar and volume sales at roughly twice the rate, as shown in the table. The brand took share by both measures. Monster posted sales gains that underperformed the category as the trademark lost share.

ENERGY+. In a March 16 research report, analysts at Credit Suisse led by Kaumil Gajrawala said energy drinks are gaining “mainstream” appeal by way of fitness energy, caffeinated hydration, and the blurring of lines between energy, sports, and seltzer consumers. The analysts referred to the expanding category as “Energy+” and said this “fundamental change” represents an opportunity for Monster Beverage. “Investors still consider energy drinks a standalone, niche category, failing to take into account its full growth potential,” the analysts wrote. “Monster will be operating in a market that is notably bigger.” The analysts pegged the US Energy+ market at $36 billion last year, with energy drinks making up 16% of the total. “In the next 24 months, Monster could lean heavily into Energy+,” the analysts said. “This includes caffeinated non-alcoholic seltzers, ‘clean’ energy and sports drinks, and a hard seltzer.”

LATEST FOUR WEEKS. According to Nielsen data cited by Morgan Stanley for the 4-week period ending Feb. 27 (not in table), Energy category dollar sales grew +8.8%, which represented a deceleration from +12.6% in the 12-week period. 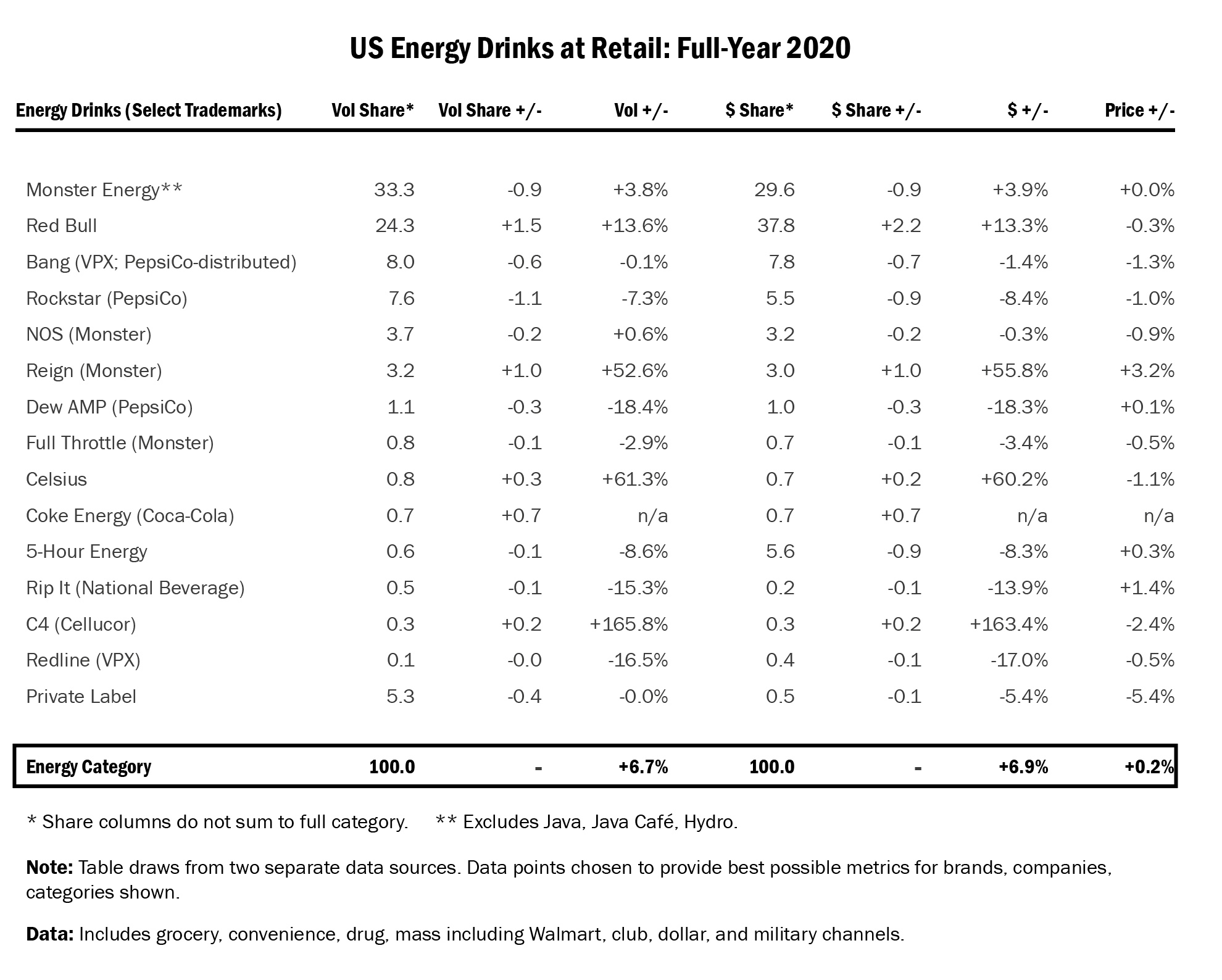