PepsiCo’s SodaStream unit has launched a line of do-it-yourself Pepsi and 7Up syrups for the at-home appliance in Canada, moving one-step closer to the US market. Called PepsiCo for SodaStream, the line includes flavored syrups for Pepsi, Diet Pepsi, Pepsi Zero Sugar, 7Up, and 7Up Zero, according to a company statement released by SodaStream Canada. The syrups are sold in sleek 440-ml (14.9-oz) bottles that make about 9 liters of finished soda. SodaStream appliances carbonate tap or filtered water with CO2 from metal canisters. Flavored syrups are then added to the carbonated water. SodaStream Canada GM Rena Nickerson said Bubly drops, launched in the country in May, generated “high double- digit” percentage sales growth for the unit’s flavored syrups business in the last quarter. She added that she is “optimistic” that the Pepsi line will “see even stronger success.”

U.S. NEXT? When asked this week about the possibility of a US launch of the PepsiCo for SodaStream platform, a spokesman told BD, “There are no plans to announce at this time regarding the US market.” Bubly Drops, based on PepsiCo’s sparkling water brand, debuted in the US in November prior to a full launch earlier this year. Last October, SodaStream International CEO Eyal Shohat told BD there were “no concrete plans” in the US for a launch of Pepsi-branded carbonated soft drink flavors for the SodaStream device. “I hope it will happen in the next couple of years,” he said then, while not ruling out a 2021 launch. 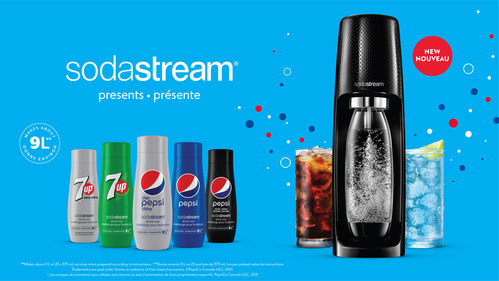 EVOLUTION. Six years ago, when SodaStream was independent, PepsiCo tested and later abandoned Pepsi and Sierra Mist syrup pods for the device in the US. As previously reported by BD, PepsiCo and its independent bottlers had worked out a plan to share profit from the pods, according to a system source. Another bottling source previously told BD that any future move to sell branded Pepsi or Mtn Dew syrups for SodaStream makers would need to include a similar profit-sharing arrangement with bottlers. In 2018, when PepsiCo acquired SodaStream for $3.2 billion, PepsiCo North America executives told bottlers in a memo that there were no plans to make brands such as Pepsi and Mtn Dew available on the SodaStream system. In Europe, SodaStream launched flavor syrups for various PepsiCo brands such as Pepsi-Cola and Mtn Dew in late 2019. Markets at the time included Sweden, Norway, Germany and France, where SodaStream enjoys a strong following. The lineup also included Pepsi Max, Mirinda and 7Up. In the October interview with BD, Shohat said the Europe Pepsi flavor syrups also helped boost the brand’s ready-to-drink sales.