For the first half of this year, National Beverage was the worst performer among beverage stocks tracked quarterly by BD, with the company’s share declining almost -39%. By comparison, the Dow Jones Industrial Average rose almost +14%. National Beverage has faced negative publicity over the ingredients in its marketleading sparkling water, LaCroix. The company also faces increased competition from PepsiCo, Coca-Cola, Polar and a host of start-ups in the growing US sparkling water category. In a letter distributed to consumers this week through social media channels, “the LaCroix team” at National Beverage reiterated past defenses that the brand’s flavor ingredients have been “certified” as natural. The company also responded to a new controversy about whether LaCroix was packaged in BPA-free cans. “LaCroix was among the first brands to obtain cans without BPAbased liners,” the post read. “All LaCroix products are being filled in cans without BPA-based liners.” National Beverage founder and Chairman Nick Caporella was conspicuously absent on the communication, despite the fact that he has been the company’s chief spokesman for years. According to Bloomberg, Caporella had lost more than $2.7 billion in net worth in the nine months ending June 11 after the stock declined -62%. 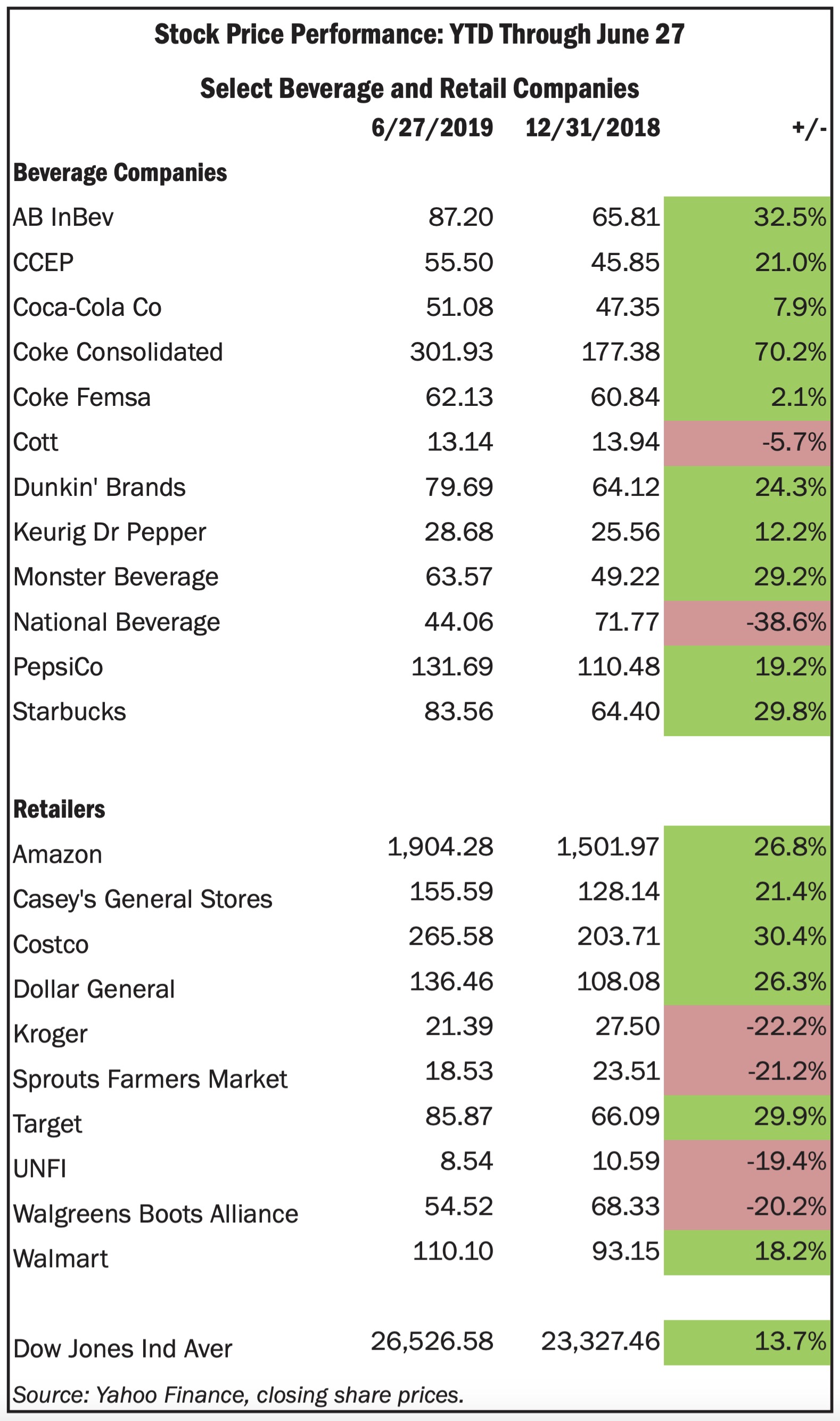 BevCos Generally Outperform. Most beverage company share prices tracked by BD rose during the first half of 2019, with many outperforming the Dow. Coca-Cola Consolidated was the biggest gainer, rising more than +70% as the company continues to streamline its operations following the acquisition of new territory from Coca-Cola. Anheuser-Busch rose +34.5%, as an improved currency and commodity picture gave investors confidence in the company’s financial outlook. Monster Beverage’s strong international growth helped propel that company’s shares. While Coca-Cola gained, its shares underperformed the Dow. PepsiCo outperformed the market.

Retailers. Amazon’s stock price grew almost +27% in the period, approaching $2,000 per share. Kroger was the worst-performing stock tracked by BD, declining more than -22%. The stock was at its lowest level since 2017 as Kroger’s online operation works to catch up to Walmart and Amazon.

WPPCKs. An article today by Barron’s detailed the recent performance of the so-called WPPCK index, made up of the five largest consumer staples stocks -- Walmart (WMT), Procter & Gamble (PG), PepsiCo (PEP), Costco (COST) and Coca-Cola (KO). During the past year, the WPPCK index jumped +27.1%, compared to +7.2% for the S&P 500. Meanwhile, the once high-flying technologyfocused FAANG index (Facebook, Apple, Amazon, Netflix, and Google parent Alphabet rose +5.7%.