Subscribe Now
Home » U.S. Coke Bottlers Grapple With Alcohol Question and What it Means for Them

U.S. Coke Bottlers Grapple With Alcohol Question and What it Means for Them

Plus, Reyes to Gain on All Fronts from Blurred Lines Frenzy.
‘The Ties that Bind’ – BD Special Pullout Graphic.

Coca-Cola’s foray into the US alcohol beverage market has spurred mixed feelings from Coke bottlers without alcohol operations as they evaluate what the development means for their businesses. Coke and Molson Coors have steadily expanded distribution and added line extensions for Topo Chico Hard Seltzer, first introduced early last year. Coca-Cola has since licensed Simply Lemonade to Molson Coors, and Fresca to Constellation Brands for use in alcohol beverage launches coming this year. Conversations with multiple bottlers have revealed two camps: 1) Those who welcome increased investment in brands such as Fresca, even by way of the alcohol beverage market, and 2) Those who say they have built the Fresca brand in key markets for years and want to be included in the potential upside as Coke leverages the brand to grow a new revenue stream by way of alcohol. The friction comes as major non-alcoholic powerhouses including PepsiCo, Monster Beverage, and Keurig Dr Pepper poke and prod the alcohol space for potential growth following efforts by beer companies and their distributors to mine the non-alcoholic beverage sector. The activity has even spurred an unconfirmed report from Bloomberg news that Monster and Constellation are considering a merger or acquisition.

INVESTMENT WELCOMED. According to bottlers in the first camp, Fresca has grown by a healthy rate despite very little direct marketing spend by Coca-Cola. Anticipated spending from Constellation for a new Fresca canned cocktail could bring new attention to the brand and grow its base, which would benefit the core non-alcoholic version, the thinking goes. In addition, the investment and a successful product could potentially elevate the non-alcoholic soda in weak Fresca markets.

SHARING THE UPSIDE. Meanwhile, bottlers in the second camp, who don’t have beer distribution operations, are pushing for a way to benefit from alcoholic versions of brands like Fresca, which they have invested in and grown on the non-alcohol side for years. A complex federal and state regulatory system for alcohol production, distribution, and retailing makes crossing over to alcohol difficult. One solution may be for Coke bottlers to help manufacture hard seltzer products, which are straightforward to produce. Or, bottlers could be paid a fee for products sold into their territories, one source suggested. A more likely solution could be for Coke to set aside some alcohol revenue for marketing and advertising dedicated to a brand like Fresca that has been lifted into the alcohol product. According to BD sources, bottlers are pushing Coca-Cola for greater clarity when it comes to the company’s broader strategy around alcohol, so the bottlers know how they might fit in.

DISTRACTION? Bottlers have other questions, as well, including: What non-alcoholic brands are appropriate for use in the alcohol beverage space? Might young consumers be confused by a package, leading to accidental consumption by minors? Does the alcohol business make sense from a cultural or even moral standpoint? Will alcohol distract from the non- alcohol side of the business, which is seeing some of the best momentum in decades. What will an alcohol business require when it comes to operations, capital investment, and capability, and how does that compare to what will be needed to service a thriving portfolio of non-alcoholic brands? According to a Feb. 16 research note from Wells Fargo, Coke CEO James Quincey told a gathering of beverage analysts in December that it was important for Coke not to introduce unnecessary complexity into the bottling network.

COKE CFO SEES ‘RIGHT TO PLAY.’ In an interview with BD, Coca-Cola Chief Financial Officer John Murphy said that as a “consumer-centric” company, Coca-Cola has a “right to play” in alcohol. “I don’t think of ourselves in the alcohol business willy-nilly,” he said. “We’re not trying to play in every single place, but there’s a segment of this business that is blurring across into our traditional space. And we have an opportunity over time to participate and capture some of the value that will be created there.” Murphy went on to add that it’s still early days for Coke’s exploration. “It would be remiss of me to say that we’ve cracked the code here,” he said. “We continue to take that approach, where we’re learning.” As for the North American bottling system participating, Murphy said, “Our bottling partners are our preferred route to market,” adding that it’s too early to know how it will play out. BD also asked about the potential to capture more of the profit pool for alcohol that might be generated from the kinds of licensing deals Coke has signed to date. “Part of the overall learning that we’re doing is not just around developing great propositions for the consumer, but over time, making sure that we’ve got the right operating and business model in place to be able to participate meaningfully in the value capture,” he said. “I don’t have the total answer today because it’s still relatively new for us and we’re learning. But it is very much on the list.”

MONSTER-CONSTELLATION: IMPLICATIONS FOR COKE. Bloomberg News once again published a report last week that Monster Beverage and Constellation Brands were in talks over a possible merger or acquisition. The news agency published a similar report in November, based on sources the reporters did not identify. To date, the information has not been confirmed by the companies, and competing news organizations have not matched the story. Analysts and industry observers mostly expressed skepticism, saying the merits of such a combination are questionable. One common view, shared by BD, is that the reports are a tactic to put pressure on Coca-Cola, which owns 19.3% of Monster and who’s bottling system distributes the brand globally. Coke has long been considered a potential candidate to acquire the rest of Monster Energy. If there were to be a significant deal between Monster and Constellation, RBC Capital Markets Analyst Nik Modi said in a report that he believes a 50-50 “merger of equals” would be most likely, with Constellation’s management team leading the combined company (the companies’ market caps have hovered just above $40 billion). Analyst Chris Carey at Wells Fargo agreed in a separate research note. A tie-up between Monster and Constellation could have implications for Coke bottlers globally if a change in control at Monster were to prompt the company to terminate its distribution agreement with Coca-Cola. Such a termination would come with a payment by Monster to Coca-Cola of at least $550 million, according to BD’s reading of the agreement found in regulatory disclosures. Monster also would likely be required to pay a termination fee to Coke bottlers, based on a similar distribution agreement between Coca-Cola Consolidated and Monster that also was part of regulatory filings. Coke, Monster, and Constellation declined to comment.

REYES AND THE ALCOHOL TIES THAT BIND. Meanwhile, Reyes Holdings is likely to participate in most of Coca-Cola’s US alcohol activity. Subsidiary Reyes Coca-Cola is Coke’s second largest US franchise bottler. Reyes Holdings also owns the country’s largest beer distributorship. As a Coke bottler, Reyes is a major distributor of Monster Beverage. What’s more, Reyes is a beer distributor for the brewing collective Canarchy, which Monster will soon acquire. That likely puts Reyes in line to distribute new alcohol products developed by Monster. In addition, Reyes’ beer division distributes brands from Molson Coors and Constellation. BD has created an infographic of Reyes’ network of relevant relationships. 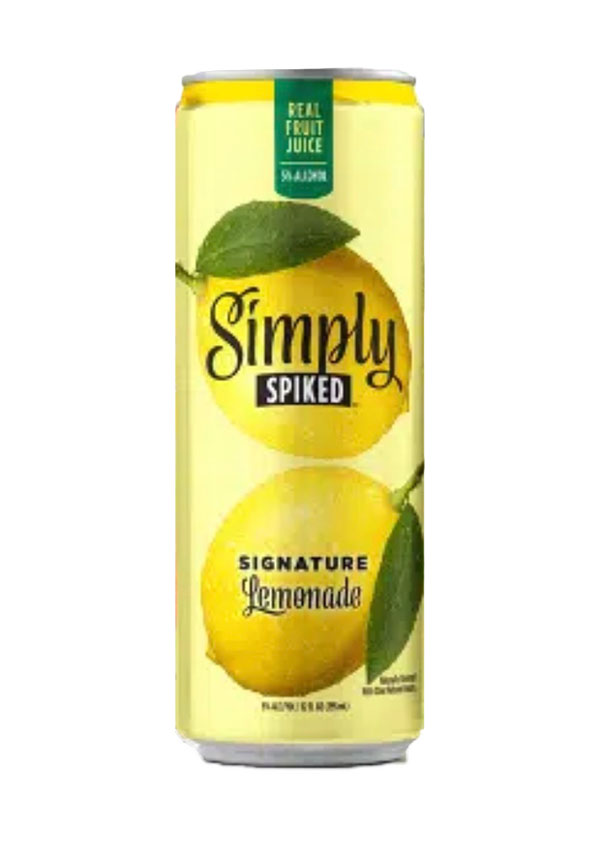 HARD SELTZER ‘PHENOMENON.’ FRAGMENTATION, SPIRITS THREATEN. Coca-Cola soon will be joined by PepsiCo and Monster Beverage in mining for growth in the US hard seltzer and flavored malt beverage (FMB) segments. Coke already markets Topo Chico Hard Seltzer and will add a Simply Spiked flavored FMB this year. PepsiCo’s new Hard Mtn Dew FMB is now on shelves in three states. And Monster is working on a hard seltzer. Plenty of other non-alcohol companies have jumped in, as well, including Sparkling Ice maker Talking Rain, sparkling water brand Spindrift, and tea company Arizona. The US hard seltzer category was a bright spot in an otherwise dismal 2021 for the extended retail beer category last year, which includes flavored malt beverages and ciders. As the table below shows, hard seltzers jumped +11.3% last year at retail (not including on-premise bars and restaurants) as the broader category declined -3.0%. Hard seltzers accounted for about 10% of the category. Flavored malt beverages also grew, by almost +2.0%. During a fourth-quarter conference call on Feb. 17, Boston Beer Chairman and Founder Jim Koch said hard seltzer’s rise to a 10% market share in less than five years is a “phenomenon” event that happens “once in a lifetime.” He added that the beer category is now “fragmented” and “nichy,” which means “innovations may take longer to develop and they’re not going to turn into 10% of the beer category.” Meanwhile, spirits makers in the US are lobbying for alcohol beverage tax changes that could make canned cocktails more price competitive with hard seltzers. Spirits-based canned cocktails are taxed at a higher rate and, therefore, generally priced higher at retail. This tax disparity is partly responsible for the proliferation of hard seltzers. Coca-Cola’s Fresca Mixed product, to be launched later this year, is a spirits-based canned cocktail. 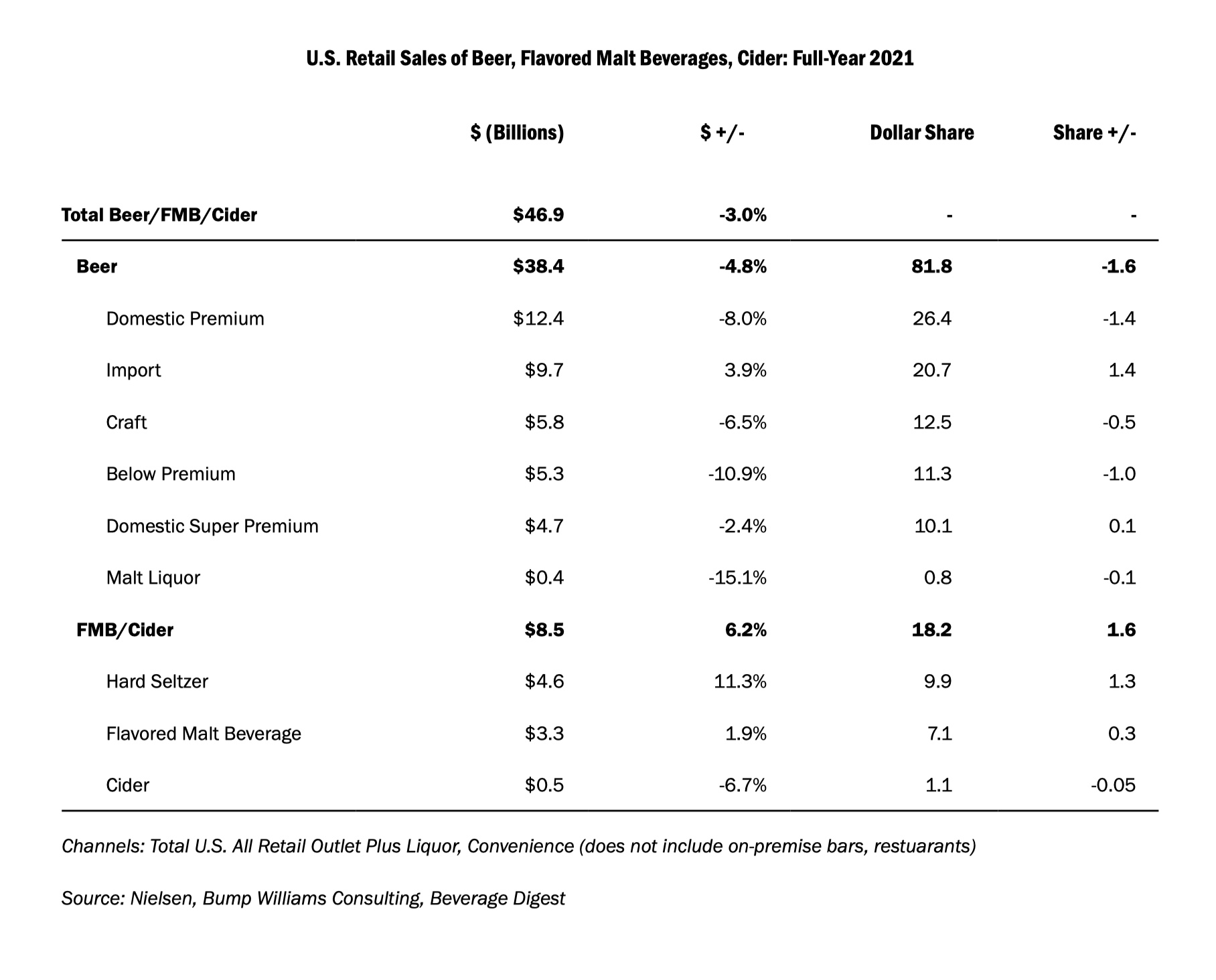 ECOMMERCE SALES JUMPED +131% SINCE 2019. Major non-alcoholic beverage companies are jumping into the alcohol beverage market at a time when the pandemic is spurring a new ecommerce habit for drinkers. Alcohol ecommerce grew to $6.1 billion in 2021, according to an estimate by Rabobank. That was up from $2.6 billion in 2019, for a +131% jump. US online alcohol sales represented 4.0% of the total off-premise alcohol market in 2021. Online sales are expected to grow +3.4% this year, Rabobank estimated. This e-commerce energy could eventually force a loosening of the three-tier system of alcohol regulation in the US, which generally requires that the manufacturing, distribution, and retailing of alcoholic beverages be handled by separate entities. The complex three- tier system, which can vary from state to state, dampens the ability of e-commerce players to scale their alcohol and home delivery businesses across state lines despite growing consumer demand for such services. Non-alcoholic companies such as Coca-Cola and PepsiCo, as well as their bottling systems, could benefit from a loosening of three-tier restrictions.