Since late last year, Coca-Cola Southwest Beverages has run a pilot test in El Paso, Texas to determine whether the returnable glass bottle can work once again in the US. The reusable package remains a staple in some emerging Coca-Cola markets around world, providing affordability for consumers and flexibility for bottlers. In more developed markets, the package can be a premiumization play in cafes. The returnable glass bottle was replaced in the

US market decades ago in favor of PET plastic bottles, which can be manufactured, filled, and transported more efficiently than glass. The returnable glass bottle project in Texas was born in reaction to several consumer and customer needs, according to Coca-Cola Southwest CEO Jean Claude Tissot. Some consumers prefer the package to plastic and aluminum, especially with food. Others gravitate to reusable packaging to reduce waste. In response, a growing set of retailers and food service outlets are looking for packaging alternatives to meet these consumer trends. The returnable glass bottle may be one in a suite of solutions, Tissot said. BD visited El Paso this week to get an up-close look at the pilot project. 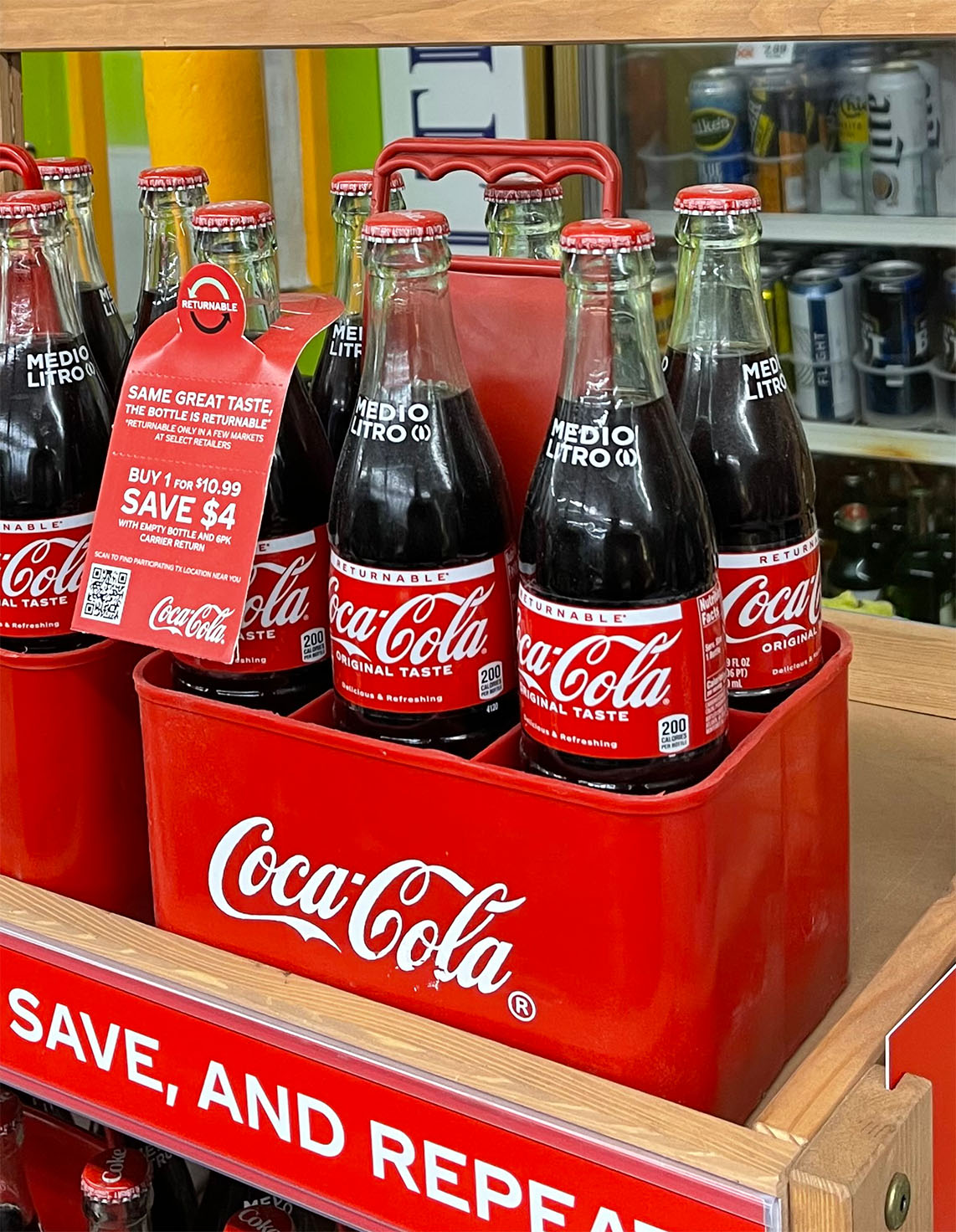 GENESIS. Brainstorming about a returnable glass bottle
began in mid-2020, said Revenue Growth Management Director Joshua Stirneman, who is managing the project for Coca-Cola Southwest. With cold returnable bottles being a mainstay in taquerias in Mexico, the question was posed whether that could be translated to other parts of Coca-Cola Southwest’s market. By September of that year discussions progressed in earnest. “I was personally a little skeptical initially,” Stirneman said in an interview. Coke Southwest, owned by Mexico-based Coke bottler Arca Continental, had plenty of managers around who had experience with returnable glass bottles in Latin American markets. Stirneman, who is 37, US-born, and based in Houston, didn’t grow up with returnable glass bottles, which was part of the reason he was perfect for the project, Tissot said. The new package and return process would need to be developed without a bias for the returnable bottle. Discussions soon would center on El Paso as a good testing ground because the town sits on the border with Mexico, across from the city of Juarez. Arca already operates a bottling plant in the Mexican city that sanitizes, refills, and ships returnable glass bottles for the Mexican market. Instead of creating a new supply chain in the US, bottles could be shipped back and forth to Juarez. El Paso also has a built-in population of Mexican-born consumers who understand how returnable bottles work and are used to drinking Coke from such a package, Stirneman said. After numerous conceptual iterations, Coke Southwest launched the test last November and ramped up in December. Stirneman said the potential of the program hit home for him on a market visit to a test site when he watched a woman return for two six packs without hesitation because she and her husband simply like Coke from a bottle.

TEST. The project includes two formats – one for immediate consumption in food service on premise (FSOP) establishments, and another for the home consumption by way of large format groceries and convenience stores. The owners of these FSOP and retail outlets pay separate wholesale charges for the liquid in each 24-bottle case and the 24 bottles themselves. When Coke picks up a case of empties, the merchant receives a credit for the full cost of the bottles. So, if all bottles are returned, the merchant ends up paying for the liquid only. In the FSOP channel, outlets currently offer single 500-ml (16.9-oz) glass bottles served cold, usually for $2.49 each. Patrons consume the product on-site with their meal and leave the bottle behind. The test has so far reached 92 of the 100 FSOP outlets planned for the pilot, with a return rate so far of 82%, according to the bottler. FSOP operators get the bottle portion of their first order free to account for loss due to the inevitable learning curve, according to Stirneman. FSOP locations to date include taquerias, burger joints, and even salad restaurants. In the at-home consumption retail market, store owners sell 500-ml bottles by the six pack only in hard plastic carriers that also are returnable. Initial pricing is $9.99 to $10.99 per six-pack. When the carrier and six bottles are returned, the consumer gets a $4 credit for the purchase of a new six pack, which brings a subsequent purchase down to $5.99 to $6.99. The system can encourage customer loyalty and repeat purchase, Stirneman said. The test so far includes about 30 retail stores. The return rate has varied across outlets and is generally lower than in FSOP, Stirneman said. At Nachitas Grocery near downtown El Paso, third-generation store owner Evangelina Terrones said the returnable bottles she gets back from Coke now are clean, unlike some of the returnable bottles she remembers as a child (not necessarily from Coca-Cola). Her daughter, who helps run the store, encouraged her to try the returnable program when approached because she saw it as an environmental benefit. Test outlets in both the FSOP and retail channels are all independent establishments as the team tests the concept and adjusts point-of-sale communications and the return process. Site owners are iterating as well. One four-store taco shop called La Gorda, a 19-year El Paso mainstay, sells 15 to 20 cases of returnable bottles per week and the stores are the test’s top locations. The store owner found that some take-out consumers wanted a glass package instead of the aluminum cans that are also offered for takeaway. So, he allows customers to pour the drink into a disposable cup for takeout or pay extra for the bottle. Other restauranteurs are solving the same issue by offering non-returnable “one-way” glass bottles in addition to reusable bottles. 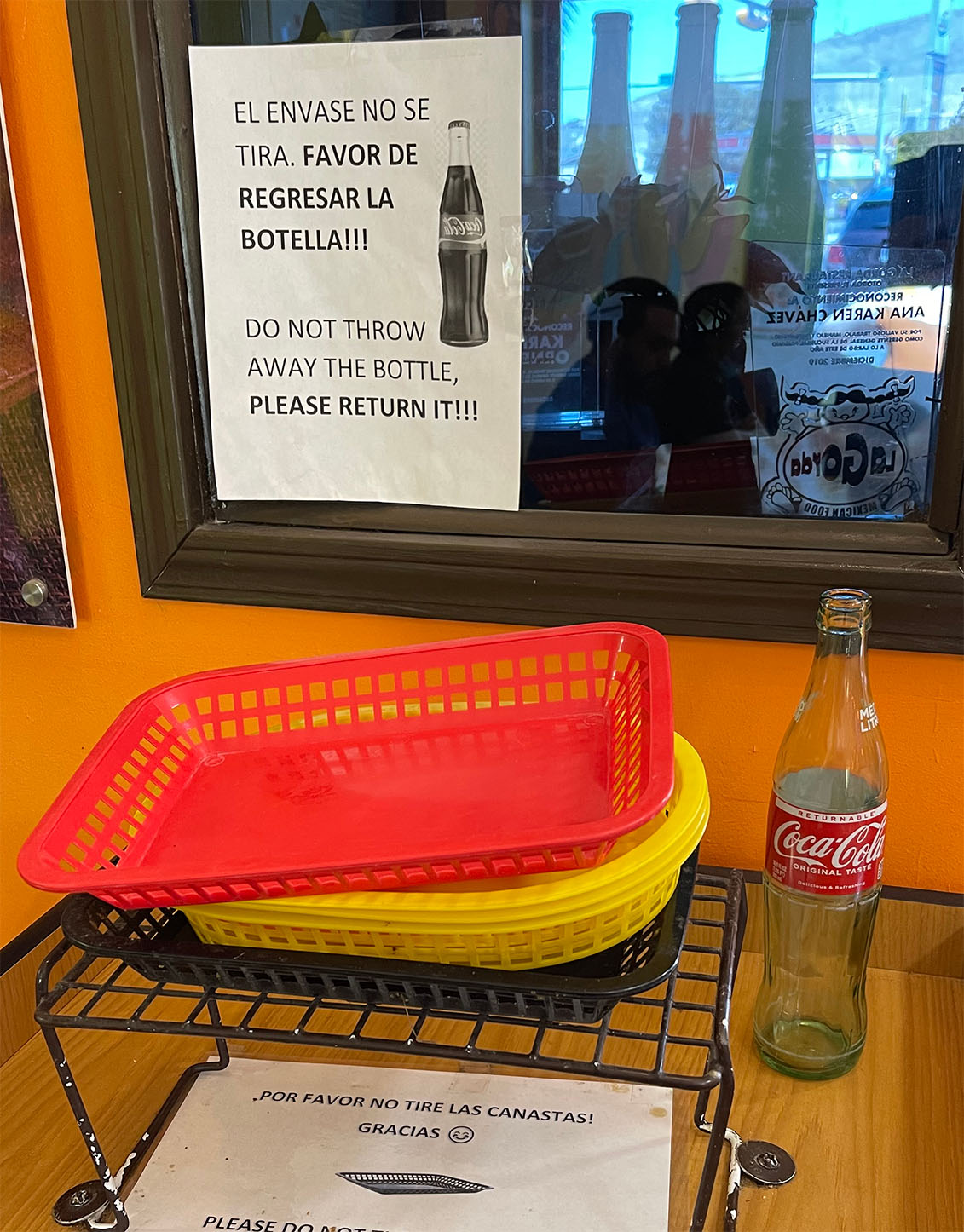 BOTTLE DETAILS. The returnable bottles are thicker than one-way glass bottles, and therefore stronger. A returnable bottle can be used as many as 25-times in a best-case scenario, depending in part on how scuffed they become. The test is using the highest- grade returnable bottles, with plastic labels that can be replaced. The bottles are rinsed and sanitized before being refilled with soda. Only full-calorie Coca-Cola is offered so far. Additional flavors are being considered. 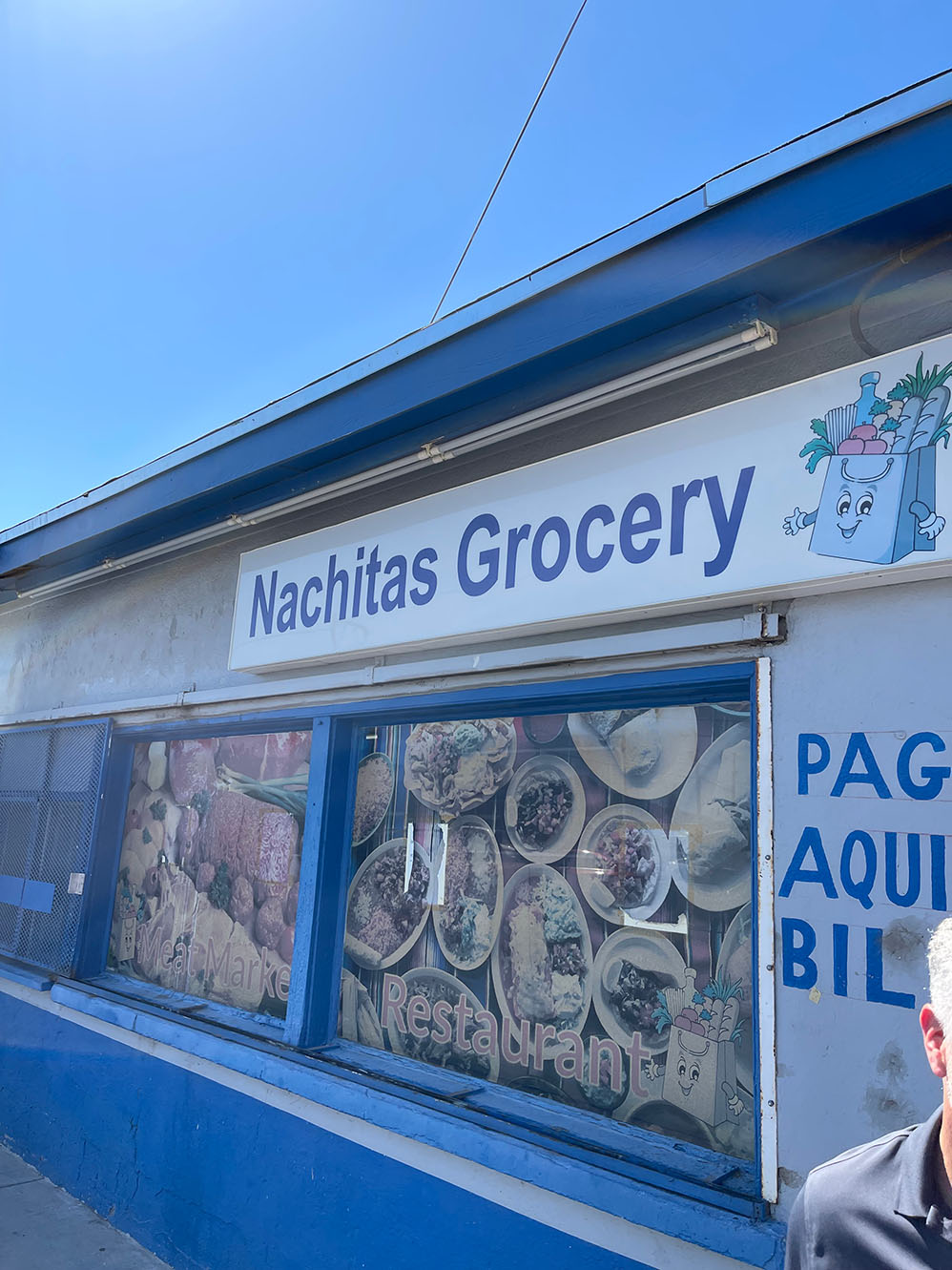 EXPANSION. A Coca-Cola spokeswomen said the bottler’s returnable bottle pilot “will help inform our returnable packaging strategy in the US” and is “part of our system’s commitment to explore circular solutions for our beverage packaging.” Tissot and Stirneman said there is reason for optimism after more than five months of testing and learning. However, they aren’t yet ready to say the experiment is scalable enough to make sense long term. (BD notes that the solution won’t unseat PET anytime soon, if ever, especially with the tight supply chain for glass.) Consumer and customer desire for returnable bottles are just two legs of a three-legged stool, Tissot said. The third is how much the program makes sense -- when it comes to business priorities including product diversification, revenue management, profitability, and supply chain -- as compared to other initiatives. For now, Tissot said of the test, “We are going to be persistent and patient.”