Covid-19 Updates.  Starting Monday, Walmart will require all customers at its more than 5,000 US stores to wear masks  …  Coca-Cola is among companies backing a congressional proposal to set aside $120 billion for grants to independent restaurants hurt by the pandemic, according to Bloomberg  …  McDonald’s has paused the re-opening of dining rooms through at least July 22 as COVID-19 cases increase in some states  …  Kroger’s healthcare unit has received permission from the US FDA for an at-home kit to collect samples from front line workers for COVID-19 testing  …  Delta has restored limited beer and wine service on its US flights while continuing a pause on soda distribution to reduce the threat of COVID-19 transmission.

Coke Shutters Odwalla.  Coca-Cola will discontinue its Odwalla juice portfolio and the brand’s chilled direct-store-delivery distribution network at the end of the month, the company has confirmed (BD Email News Alert 7/1/2020). “It’s accurate to state that the Odwalla brand has endured ongoing financial challenges, which was a factor in this decision,” a Coke spokeswoman told BD. According to a letter from Coca-Cola to retail customers, “a rapidly shifting marketplace” contributed to the outcome. “For the last several years we’ve been assessing Odwalla’s performance in the marketplace to determine if there was a path forward for the brand,” read the letter by David Rosen, Coca-Cola North America’s VP of commercialization & sales planning for Minute Maid, which handles Odwalla. The decision may have been helped along by the pending COVID-19 crisis, which has forced Coca-Cola to take an even harder look at smaller-scale SKUs. “The decision to cease operations was not taken lightly and comes at a time when it is more important than ever to evaluate where we can improve efficiencies in our business and be more effective in how we operate and provide customers with what they want,” Rosen added. The soon-to-close chilled direct-store-delivery system also handles Minute Maid juices, Simply juices and Fairlife milks, a spokeswoman told BD. Packages currently sold through the chilled DSD system will instead be distributed by warehouse-direct and independent delivery. Odwalla was founded in 1980 and sold to Coca-Cola in 2001. One of Odwalla’s co-founders, Greg Steltenpohl, later co-founded nut milk brand Califia Farms (BD 3/4/16).

Can Shortage.  The surge in demand for soda 12-packs in the US has further strained an aluminum can supply already pressured by craft beer’s shift to the package from glass bottles. Based on discussions with sources within the soft drink industry, some high-demand core products are being prioritized over smaller SKUs where necessary. In some cases, this has led to temporary out of stocks. The impact varies by region, and the problem so far has been manageable for large soft drink producers, sources said.  NEW PLANT.  Today, Poland-based Canpack Group and its Pennsylvania-based owner, Giorgi Global Holdings, announced the construction of a new can body and ends manufacturing plant in Olyphant, Pennsylvania to open in late 2021.

Sustainability.  Coca-Cola, PepsiCo and Keurig Dr Pepper are among consumer product companies that have extended investments in Closed Loop Partners for another five years (BD 2/1/19)  …  Evian has launched a recyclable plastic bottle body for restaurants and hotels that uses etched branding in lieu of plastic labels that many recyclers can’t handle  …  Unilever and PepsiCo have joined a consortium with Diageo and led by Pulpex Limited to launch products packaged in a new 100% paper beverage bottle by 2021.

Technology.   Kenya-based Coca-Cola Beverages Africa has teamed with Safaricom to connect retail beverage coolers together with sensors to collect operational and usage data.

Retailers.  This month, Walmart will launch an e-commerce membership to compete with Amazon Prime; the $98-a-year service will include same-day grocery delivery  …  The parent company of grocery chain Winn-Dixie said it is considering changing the name to foster “a culture of belonging, inclusion and diversity,” according to media reports  …  Dunkin’ Brands will close 450 coffee shops within Speedway gas stations by the end of this year, the company announced. 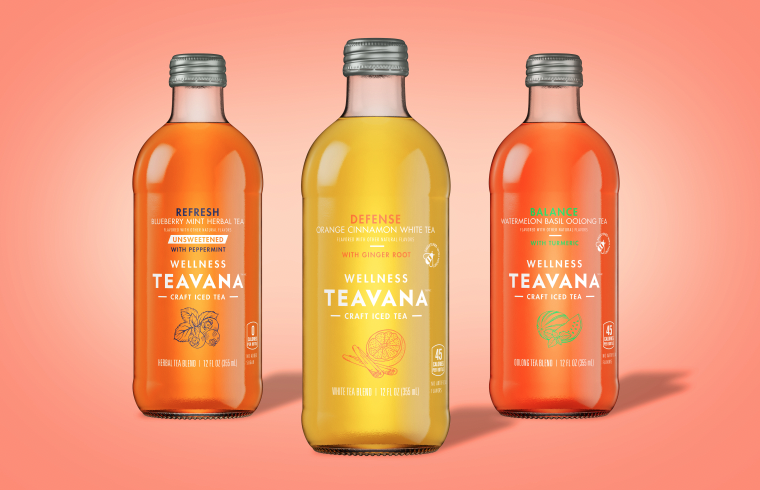 Launches, Expansions.   PepsiCo’s Mtn Dew has launched a fruit punch flavored Southern Shock variant exclusively at quick-serve restaurant Bojangles  …  Neuro Brands, whose ready-to-drink products are distributed by Keurig Dr Pepper, have introduced a line of powdered functional drink mixes  …  The sparkling water parade continues with the launch of Aura Bora in Whole Foods’ Rocky Mountain region that incorporates “real herbs, fruits, and flowers” and comes in five flavors  …  Starbucks and Anheuser-Busch InBev have introduced a line of Teavana Wellness Craft Iced Teas in three flavors as part of the companies’ RTD tea partnership launched in the US in 2016  …  Health-Ade has launched a shelf-stable Booch Pop line that includes kombucha and added probiotics in a soda-like beverage  …  Poland Spring has launched a sparkling energy water in flour flavors in 11.5-oz cans.

Regulations, Taxes.  The US Dept. of Agriculture has forecasted a +3.0% increase in grocery prices on average, driven by meat, poultry and fish, according to Fern’s AG Insider; that would be the highest annual increase since 2011.

International.  Nestle and aspartame-maker Ajinimoto have joined an innovation consortium in China called the China Food Tech Hub  …  7-Eleven and Coca-Cola have launched Coke-themed convenience stores in Hong Kong  …  Capri Sun, the pouch drink for kids, and its UK distributor, Coca-Cola European Partners, have reformulated the brand’s “no added sugar” variant in the country to include stevia instead of sucralose, allowing a “nothing artificial” claim.

Quick Takes. PepsiCo was among corporate sponsors who reportedly asked the Washington Redskins NFL football team to change its name after criticism that then name stereotypes Native Americans  …   In an exciting bit of news for the Quaker guy from Quaker Oats, PepsiCo has teamed up with the government and others to sequence the oat genome.