Almost two years after acquiring Muscle Milk maker CytoSport, PepsiCo is leaning into yet another brand that came over in that deal. Plant-based protein shake Evolve relaunched last month with a new formula, packaging, and flavors. The refocus comes as the adult nutrition category, also known as engineered nutrition and dominated by protein shakes, blurs and expands to include healthy meal replacement, weight loss management, sports protein, diabetes management, and nutrition care for seniors. The biggest differentiator for Evolve will be an increase in fiber to 10-g from 1g previously. The brand also is adding a berry flavor amid “a sea of chocolate and vanilla,” said Laura Gardner, senior director of PepsiCo’s active fitness portfolio. Using berry as an ingredient allows the brand to add Vitamin C and Zinc to the functionality mix, she said. What the relaunch doesn’t do is add more protein. Evolve retains the 20g of protein the drink has had since coming over to PepsiCo. “It’s been a protein arms race,” Garner said. “It’s who can put the most protein within a single bottle. More isn’t always better. There is a happy balance and an ideal amount.”

LIQUID DETAILS. The drink includes B12, calcium and iron. Protein comes from peas. Calories range from 140 to 150 per bottle, and the drink is sweetened with 4g to 5g of sugar in addition to stevia. There are no artificial sweeteners or flavors, and the drink is vegan and non-GMO. Flavors are Double Chocolate, Vanilla Bean, Berry Medley, and Café Mocha.

PACK, PRICE. The refurbished brand is packed in 4-packs of 11-oz Tetra Pak cartons for large format retail stores. Pricing will be $8.99 per multi-pack. An 11.16-oz single-serve HDPE bottle will be sold in the immediate consumption channel for $2.99.

C-STORE PUSH. Traditionally, grocery and mass retail have been the largest channels for protein beverages, Gardner said. That is changing as more consumers use protein shakes for meal replacement and on-the-go nutrition. “Consumers broadly in the marketplace are demanding more functionality from their beverages, and that they be packed with more nutrients,” she said. “The convenience and gas channel has a strong need for protein beverages and then specifically plant protein beverages as this trend grows and becomes mainstream.” C-store retailers for the brand include 7-Eleven, Speedway, and Circle K.

BACKGROUND. PepsiCo purchased CytoSport in early 2019 for $465 million. That was about five years after Hormel Foods paid $450 million for the business, which was founded in 1998. CytoSport flagship brand Muscle Milk struggled under Hormel following a flood of competition, including from Coca-Cola backed and now owned Fairlife Core Power. At the time of the CytoSport acquisition, PepsiCo executives said they would use Cytosport and Gatorade’s protein shake line to craft a “premium and mainstream approach” to the protein drink business. CEO Ramon Laguarta said at the time that the adult nutrition category would grow fast in the coming years” and that the company wanted “full ownership of the full value chain so we can innovate with multiple brands to make sure we cover all these spaces.”

CATEGORY PERFORMANCE, COMPETITION. Evolve sales declined by almost -1.0% last year in a US Adult nutrition category that grew +3.9%. Abbot’s Ensure product led the category with a 26 share after growing +8.6%. The top-3 meal players all grew while No. 4 Muscle Milk declined -17%. Fairlife Core Power, which is about half the size of Muscle Milk, jumped +18%. A newcomer to the market, Don’t Quit, is backed by Keurig Dr Pepper. Beverage entrepreneur Danny Stepper of LA Libations and fitness celebrity Jake Steinfeld of Body By Jake launched the brand last year. In 2017, a company called Owyn launched a protein shake that is now run by President Mark Olivieri, a former PepsiCo (Frito-Lay) marketer. 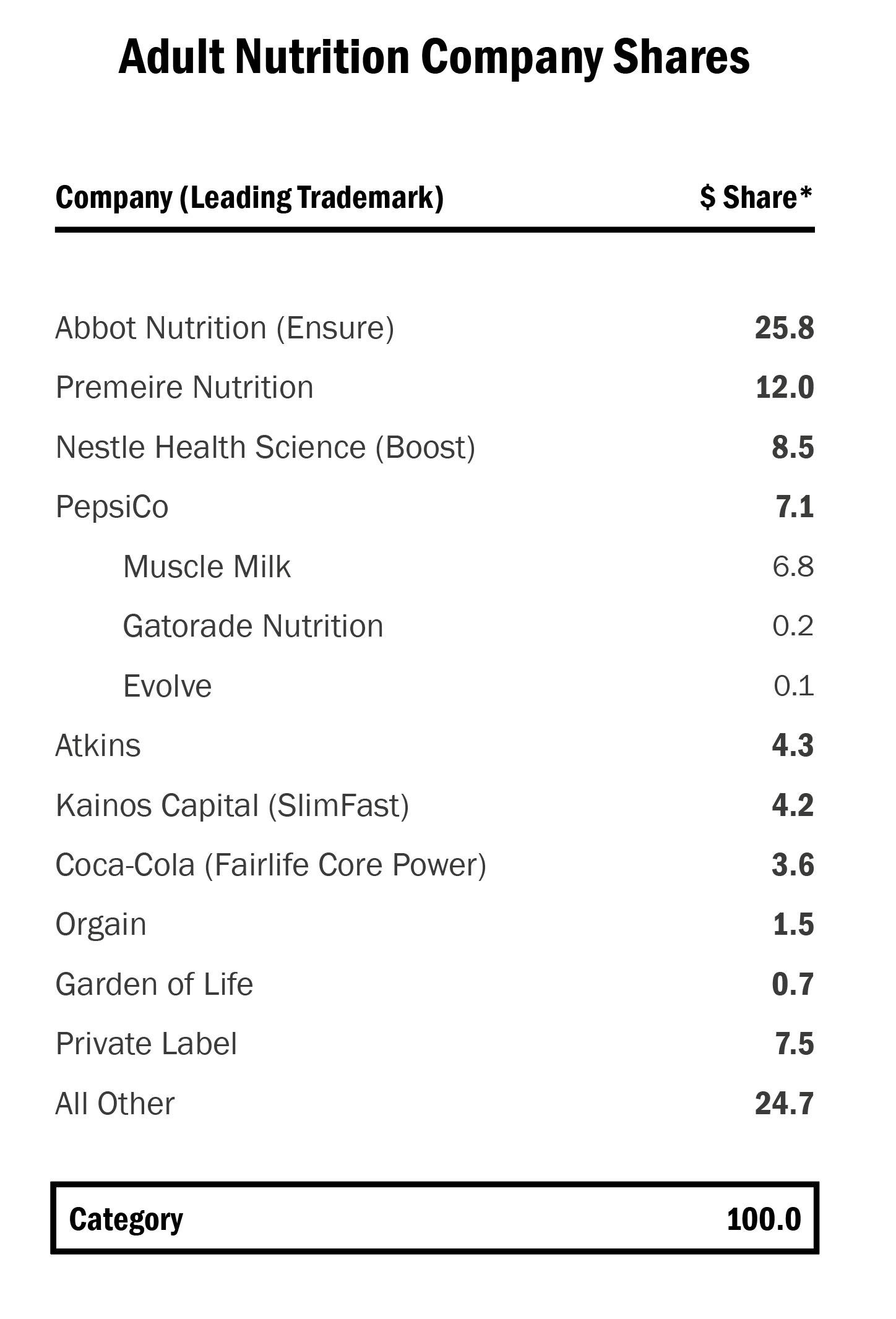