Coca-Cola and PepsiCo began to recover in 2021 from the previous year’s pandemic- stricken global beverage market. Increased mobility last year after Covid-19 lockdowns led to growth in most markets, helped by a favorable comparison. The table below shows results for selected markets as reported by Coca-Cola and PepsiCo in their respective annual regulatory filings.

RUSSIA SUSPENSIONS. Looking ahead to this year, at least one key market region faces new challenges as Russia continues an assault on Ukraine. Coca-Cola and PepsiCo have joined numerous US-based multinational companies in suspending operations in Russia following the country’s unprovoked invasion of Ukraine. Coca-Cola generated 1.4% of the company’s global beverage volume from Russia in 2020, according to a regulatory disclosure for that year. On March 9, Coca-Cola HBC, which operates in Russia and Ukraine, said in a statement that the company respects Coke’s decision. HBC also stated that executives would “thoughtfully consider the interests of our employees, customers, and suppliers in Russia” as the company worked “in close alignment” with Coca-Cola on the Russia suspension. Coca-Cola owns about 21% of HBC’s shares. Meanwhile, PepsiCo generated about 4.4% of global revenue, or about $3.4 billion, from Russia, according to a regulatory disclosure. As shown in the table, volume growth in Russia last year jumped by a double-digit percentage. PepsiCo’s suspension will not include essential drinks such as milk, dairy, and baby food products, the company said. 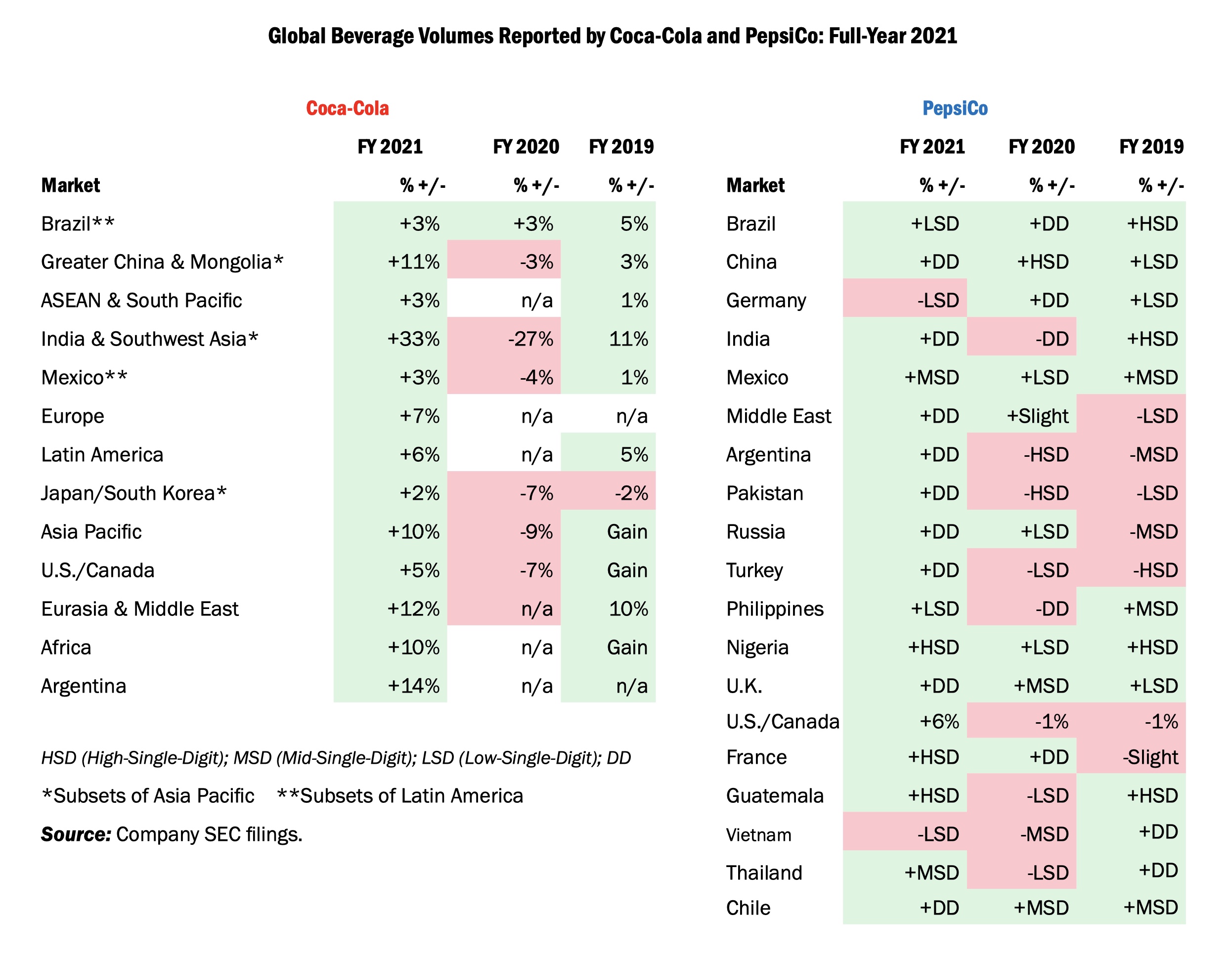 COCA-COLA. Large markets including Europe, China, Mexico, and the U.S./Canada posted single-digit percentage growth rates in 2021 after declines the previous year. The China and Greater Mongolia business unit grew +11% after a -3.0% decline in 2020. After a -27% decline in 2020 for India & Southwest Asia, the market jumped +33% last year.

PEPSICO. Of the beverage markets reported by the company, only Germany and Vietnam posted volume declines in 2021. In Vietnam, the Delta variant of the Covid-19 virus triggered a strict lockdown late last year in Ho Chi Minh City, leading to a record third-quarter economic contraction for the country, according to Reuters. Germany also faced a record Covid-19 outbreak late last year as the economy shrank and lurched toward recession.