Private label carbonated soft drinks (CSD) at US retail were unable to make progress in the first quarter of this year even though shoppers are facing unprecedented inflation at the grocery. As shown in the table, Private label CSD dollar sales barely grew in a category that was up more than +10% in the quarter. Private label CSD volume declined at more than three times the category rate. While private label CSD pricing growth lagged the category by more than 4 percentage points, it nonetheless exceeded +8% as suppliers looked to offset higher costs for labor, transportation, and raw materials. 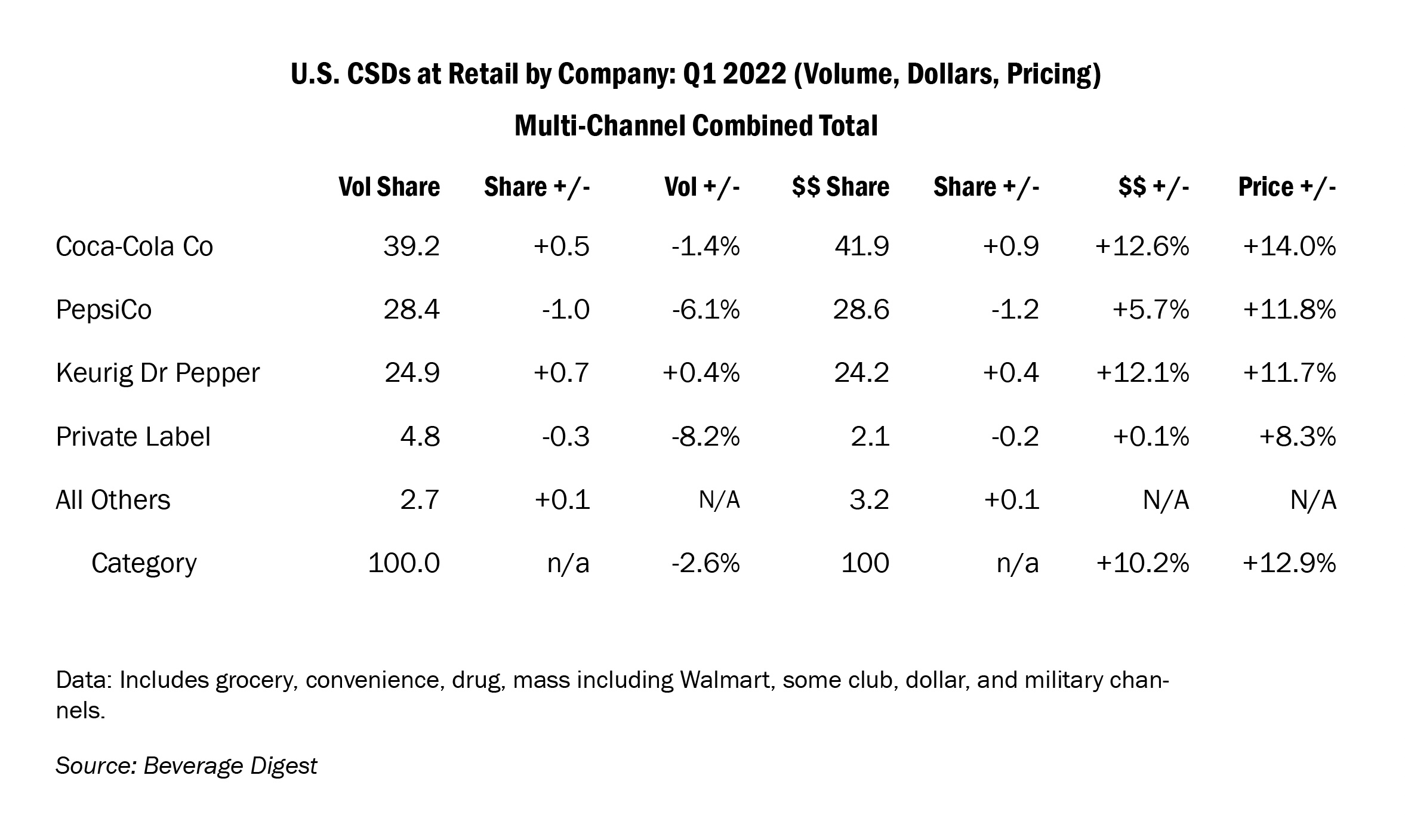 C-STORE CSDS UNDERPERFORM. As consumers grappled with higher gas prices that left less money than usual for discretionary soda purchases, the convenience channel posted half the dollar growth rate for CSDs that was posted across the multi-channel retail landscape. As shown in the Green Sheet with this newsletter issue, the c-store channel grew dollars +4.7%, compared to a multi-channel rate of +10.2%. That was coupled with CSD volume in c-stores that declined at twice the multi-channel rate. This will be a closely watched trend, especially if higher pricing in take-home retail channels such as groceries forces consumers to cut back on soda purchases or shift toward private label offerings.


METHODOLOGY. Quarterly, BD tracks multi-channel soda sales at retail from two data sets. This does not include the fountain channel (see Fact Book, 27th Edition for all-channel results, including fountain, for 2021). The data are combined to present a cumulative snapshot of the industry. The data cover supermarkets, c-stores, drug chains, mass merchandisers including Walmart, some dollar/club stores, and the military channel. The table within this story shows volume, dollar and pricing metrics by company or brand from the combined data set for the period covered. The Green Sheet that accompanies this newsletter shows corporate and top-10 brand shares for the combined data sets, plus breakouts for major channels.

COCA-COLA OUTPACES CATEGORY PRICING GROWTH. As shown in the table and Green Sheet, the US CSD category at retail in the first quarter grew +10.2% by value on pricing that grew +12.9% and volume that fell -2.6%. Coca-Cola and Keurig Dr Pepper outperformed the category in dollar growth and volume results. PepsiCo underperformed the CSD category in dollar growth as volume declined at more than twice the category rate. The top-3 soda makers all posted double-digit percentage pricing increases, with Coca-Cola outpacing the category by that metric.

BRANDS. As shown in the Green Sheet, dollar sales in the quarter grew for all top-10 CSD brands except Diet Dr Pepper, which declined -0.5%. That retail sales decline was more than offset by growth in Dr Pepper Zero Sugar, which was introduced near the end of last year’s first quarter. (Dr Pepper Zero Sugar generated almost $89 million in retail value during the first quarter of 2022, up from about $18 million a year ago.) As for volume sales, only Sprite and Coca-Cola Zero Sugar posted gains, which put both well ahead of total category performance. Both brands turned in the highest dollar growth as well.

PLUS, MOST RECENT 4 WEEKS. At measured retail in the four weeks ending May 21 of this year, CSD dollar sales jumped +12.2% on volume that declined -1.8%, according to Nielsen data cited by Goldman Sachs in a May 31 report. Dollar sales represented an acceleration compared to the 12-week and 52-week periods, while volume eroded compared to the same periods. Among the three primary CSD companies, Coca-Cola outperformed the category in the 4-week period with dollar sales growth of +16.6%. PepsiCo and Keurig Dr Pepper posted CSD dollar sales growth of +6.3% and +11.6% respectively. Separately, the energy drink category posted dollar growth of +9.5%, which nearly matched the 12-week rate and was almost 3 percentage points lower than the 52-week rate as higher gas prices this year have slowed traffic in convenience stores, a crucial channel for the category. Sports drinks grew dollars by +10.7%, while bottled water grew +17.7%.