What’s Life Like These Days for Regional Soda Brand Ale-8-One? 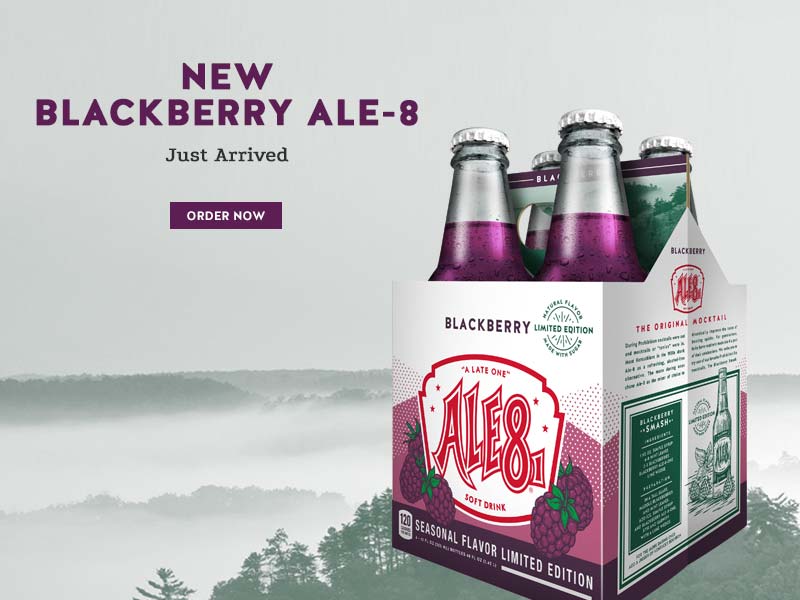 Nestled in Winchester, Kentucky just outside Lexington and less than three miles from the Bluegrass Heritage Museum, craft soda maker Ale-8-One Bottling is a microcosm of the complex US beverage market. The 96-year-old brand (and 120-year-old privately- owned soda company) is small, selling about 3 million cases a year. Even so, Ale-8-One has assembled a distribution network that includes Coke bottlers, Pepsi bottlers, and
beer distributors, in addition to the company’s own direct-store and warehouse delivery operations. BD checked in recently with Ale-8-One CEO Ellen McGeeney, who just moved into the role this month after almost 9 years as president and COO. She calls her work with Ale-8- One her “dream job.” We wanted to know what life was like for a small soft drink brand at a time of unprecedented cost and pricing inflation.

‘Crafty’ Distribution. Ale-8-One has pulled together a complex distribution system in recent decades for its sodas, which include the flagship ginger/citrus flavor, cherry variants, an orange cream flavor, and a just-launched Blackberry version. The company owns direct store delivery (DSD) trucks that reach 27 central Kentucky counties, where the brand is ingrained. “We have stores where literally it sells more than Coke or Pepsi or Mountain Dew,” McGeeney said. Outside of Kentucky and some neighboring geographies, Ale-8-One is sold mostly as a specialty soda. The company has contracted with DSD players in Ohio, Indiana, Illinois, Tennessee, and West Virginia. One of those DSD partners is Coca-Cola Consolidated, and in an arrangement that originated with Coca-Cola Enterprises more than 20 years ago and has since transferred following Coca-Cola’s North America refranchising process. The bottler does such a great job, McGeeney said, “we are always hearing that Coke bought us!" Pepsi bottling partners include Kentucky-based Pepsi Corbin. The company uses beer distributors in other areas. The brand, which in some way touches almost all US states, uses warehouse distribution for Cracker Barrel nationally, as well as for regional divisions of chains such as Kroger, Ingles, and Fresh Market. Ale-8-One also sells syrup for fountain accounts. Ale-8- One’s mantra is to generate “steady, profitable, sustainable growth,” so expansion decisions are weighed carefully, McGeeney said. “We’re trying to grow for the most part in concentric circles out,” she said. “It’s a profitable way for us to grow.” Ale-8-One has posted percentage growth rates in the teens during the past two years, she said. The careful approach has come in handy as US beverage makers face spikes in the cost of transportation. “These are the moments when I’m really excited that 97% of our volume is shipped within 250 miles,” she said.

TRADITION. Ale-8-One has its own secret recipe, which is said to be mixed by hand by fourth-generation owner Fielding Rogers, the great-great nephew of founder George Lee Wainscott. “There’s a little corner in the back of the plant with this little spiral staircase,” McGeeney said. “And it goes up to his secret blend room where he has this just 20-gallon batch tank.” Rogers uses Wainscott’s hand-written concentrate recipe hung on a wall. “To this day, every single Ale-8 that is sent out into the world originates in small batches from his hands,” Ale-8-One’s website states. Ale-8-One’s signature package is a glass bottle. The company produces the package in-house. About 71% of the brand’s volume is sold in glass, according to McGeeney. Another 22% is packaged in cans, and 7% in PET. Both Coke Consolidated and Pepsi Corbin produce product in cans and plastic.

PRICING NOT TAKEN LIGHTLY. After about three years without raising prices for its products, Ale-8-One boosted prices twice this year. “We’re not like some other folks who do it on a clockwork annual basis,” she said, adding that the company is considering a third increase because of the unprecedented cost pressures. “We haven’t made that decision yet, but we’re looking at another one just because it’s killing us.”

CRAFT SODA TRENDS. Ale-8-One is capitalizing on ginger ingredient trends, flavored soda trends, and consumer desire for regional brands with heritage, McGeeney said. Interest in cocktail mixers, which plays well on social media, also benefits the brand. When it comes to marketing, the company is spending more to acquire customers in e-commerce channels, where “repeat purchasing in that channel is so high.” That doesn’t mean retail theater isn’t still important. “At the end of the day, nothing sells like outstanding display,” she said. “We will never leave that behind. Outstanding, exciting, popping, well-located in-store display. There is no better spend in the world.”

ZERO SUGAR. Ale-8-One is among the soft drink makers that have recast their “Diet” soda variants to “No Sugar” amid a consumer embrace of the platform. “Since we did that, we have seen growth rates between 20% and 30% on all of our zero sugar products,” McGeeney said. “Our fans are clamoring for us to take the flavors that we’ve been developing and create zero sugar versions.” Ale-8-One’s Zero Sugar products are sweetened with sucralose and acesulfame-potassium (ace-K). Sugar-sweetened versions of Ale-8-One come in at 120 calories per 12-ounces, which is lower than the largest full-calorie soda brands. “We actually work pretty hard at that,” McGeeney said, adding that the drink’s lower carbonation level allows more sweetness to come through with less sugar.