‘Vast Majority of Top Line Growth’ to be Led by Pricing, Analyst Predicts.
Volume Could be ‘Big Topic’ by Year’s End, One Analyst Says.

The big story of 2022 was surprisingly low price elasticities in the US for carbonated soft drinks as manufacturers raised prices to offset runaway costs for everything from labor to packaging. At retail last year, CSD pricing jumped almost +14.8% last year, driving category dollar sales up more than +13.4%, according to recent Nielsen data published by Goldman Sachs. Volume declined just -1.4% as consumers, flush with cash accumulated during pandemic lockdowns and government stimulus payments, mostly absorbed the higher pricing. The question for 2023 is how long will this stronger-than-usual pricing environment last? Will volume take an unhealthy turn this year? During on-stage interviews at Beverage Digest’s Future Smarts conference in December, bottlers, beverage sector stock analysts, and brand executives offered their takes on what to expect this year when it comes to input costs, pricing, and consumer reaction. The following is a synopsis of their views, which have been edited or paraphrased for clarity and space.

On Cost Pressures
The labor market’s going to continue to be tough, and the way you deal with it is pricing, in terms of our beverages, but also how we invest in our operations to be less dependent on certain types of labor. That’s where automation comes in. The beverage industry in general was fairly lazy in terms of prices for a long time, and I think we still have some room to grow there in terms of making sure that we’re pricing our beverages appropriately.

On the Balance Between Rate and Mix
We always want to try to have a positive algorithm when it comes to share and transactions, but it’s an algorithm where we try to be as balanced as possible. You don’t want to go crazy on rate, obviously. You want to see what the market can bear, and there’s a number of ways we deal with that obviously. Promotional activity is always going to be part of it, and package diversification. Then for us as bottlers, we have to make sure that we’re being efficient and effective in our day-to-day operations, like warehouse, delivery functions, merchandising. 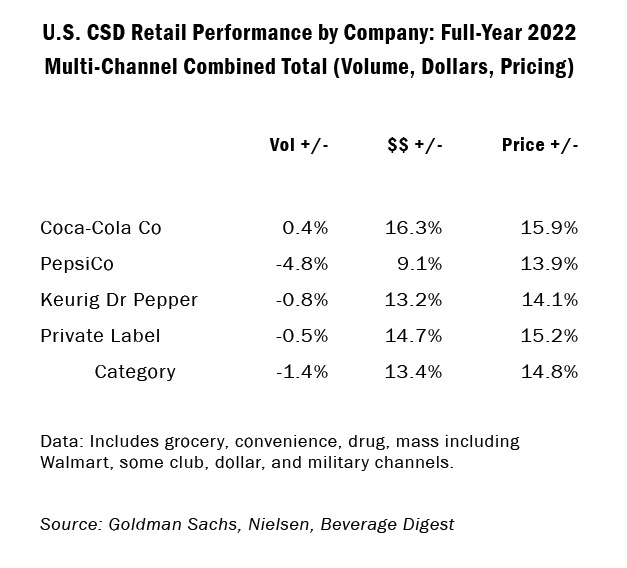 On the Outlook for Continued Pricing Growth
It still has some legs, right? But I think the legs also come in our continued priority on package diversification, like 1.25 liter, sleek cans, minicans, all of those. How we manage that going forward is going to dictate our RGM [revenue growth management] capabilities. It’s going to stick for a while. It’s there for a few years.

On Cost Pressures
The biggest challenge is the uncertainty on the cost of goods and inputs. Fuel’s going down, oil prices per barrel went down. Diesel fuel – shortage of supply -- hasn’t come down as much. And that’s a concern. The [Russia-Ukraine] war going on, the droughts, the hurricanes, tornadoes, and the floods. All these things are affecting crops, affecting international freight, domestic freight. Shortage of CDL drivers. Trying to get vehicles in a timely basis. You’ve got all these variables coming together. I’m unbelievably impressed by the entire industry that at the end of the day you’re making, distributing, and merchandising millions and millions of cases. And what it takes to get that all the way through the supply chain system and into store and into consumers hands, it’s pretty impressive. We’ve just got to be on our toes. We’ve got to be able to adapt.

On the Balance Between Rate and Mix
It’s definitely more rate today than mix. In the past you always had single-serve rate to really carry the day, as well as on-premise foodservice. There wasn’t as much rate in take-home, but today there’s a lot of rate in take home. There’s also mix changes within that. During the pandemic, or as a lot of people call it, the “candemic,” we didn’t even know the consumers wanted to go to, say, half-liters as much as they did. And all of a sudden, they’re shifting, drastically. And then the retailers are actually featuring them more and more. You also had out-of-stocks. As those [recede] it’s going to improve mix versus just rate. So, it’s going to rebalance itself.

On Consumer Acceptance of Higher Pricing
It starts with muscular, iconic brands. Once you have that, then how do you create the right marketing, both national and local, as well as execute it in stores. Consumers are always looking for value. Even the highest price in large format is still $0.50 a can.

On the Outlook for Continued Pricing Growth
It will continue. [Bottlers] still have to cover their costs. Prices are up but it’s still affordable. But it’s something that’s going to be watched closely.

On Planning for a Turn
Consumers want choices in brand, package, innovation. We’ll plan it far out and then make sure we have contingencies to change on a dime. Mid to high earners maybe aren’t as impacted [by higher prices]. But for low-income shoppers, credit card debt is going up, savings are down. We’re watching it closely, and really balancing, and not getting lulled to sleep that everybody’s okay. And making sure they have value, whether in the channel they are shopping, or the packages that we’re offering.

On the Balance Between Rate and Mix
In the last three years, while CSD pricing is very accelerated, it’s actually fairly rational and in line. Package mix is important in having a chance to provide consumers with packages at every value price point, and it’s critical to how we think about the business and making sure that there’s always an option.

On the Pricing Environment Outlook
We’re at a stable but healthy level of pricing in the market and our data would say that the mix of retail dollar growth and pricing growth is still holding strong.

Kaumil Gajrawala, Managing Director, Credit Suisse
If any of us said three years ago that we expected +15% pricing on zero volume, we would have been laughed off stage. I think we’ll continue to grow mid- to low-single-digits on pricing. You’ll have the carryover effect for ‘23, which is probably big since this year’s pricing increases carry over to the next year. It will be a lot more about mix and volume as we go beyond the back half of ‘23 looking forward. In fact, volume’s going to be maybe the big topic this time next year because of what we know to be a lot of cost inflation.

Bonnie Herzog, Managing Director, Goldman Sachs
Unprecedented levels of pricing have gone into the market. What we’re most encouraged by is that, for the most part it does seem like this has been sticking. We’ve been seeing very limited down-trading or cost price elasticity. We’re encouraged by that. The consumer has been quite resilient, but there’s been a need for a lot of this pricing going to the market just to offset the inflationary touches that everyone’s been facing. We expect this strong pricing to continue, and maybe a little bit more to be put into the market. The vast majority of top line growth will continue to be led by pricing, but we’re certainly keeping our eyes on any volume. You saw the most recent quarterly results that Pepsi really earned the bulk of its top line from price mix. Virtually no volume, little bit more volume coming out of the Coca-Cola Company. Again, this is something we’re going to be monitoring going forward.

Nik Modi, Managing Director, RBC Capital Markets
The category for many years was in deflation. There’s a lot of [pricing] catch up that needs to happen. I just did some quick math. With a 24-pack right now, you can get Pepsi, Dr Pepper, Coca-Cola for about 64 cents a can. That’s pretty good value. Still pretty cheap. Then, think about the substitution. If I wanted to get a dozen donuts from a Dunkin’ Donuts, it would be close to 90 cents a donut. You have a lot of coffee at $1.50, for a really bad cup of coffee, and I had to pour it myself. When you think about the substitution, there’s still a lot of value left in this category. The category, broadly speaking, can price above inflation. That’s how we have to think about it. We need to catch up for those two lost decades. Everyone was being very, very naughty, and so there’s a lot of catch up to do in the category. Then you think about all the opportunities with all the new pack sizes that are coming out. That then just adds to the potential of pricing above inflation.