Sports Sponsors Sidelined in the Era of Covid

Together, Coca-Cola, PepsiCo and Keurig Dr Pepper have pouring and marketing rights contracts covering 172 teams and racing tracks across the top US professional football, basketball, baseball, hockey, soccer and racing leagues (see table). PepsiCo and Coca-Cola also hold overall corporate sponsorships with five of those leagues. Virtually no soda is being poured amid the ongoing COVID-19 pandemic. The National Basketball Association (NBA), Major League Baseball (MLB), the National Hockey League (NHL), Major League Soccer (MLS) and the National Association for Stock Car Auto Racing (NASCAR) halted competition in March to protect athletes and fans. While the National Football League (NFL) regular season won’t start until September, there is no guarantee those players will be back on the field as the virus continues to spread. The same is true for the NBA, NHL and MLS, which have announced various plans to return to competition. Meanwhile, Baseball’s owners and players are arguing over whether to hold a shortened 60 game season. Leagues that do get back to action will do so in fewer arenas, with less travel and with scaled down audiences. One sport that is back in action is the National Association for Stock Car Auto Racing (NASCAR), but no fans are allowed. Coca-Cola sponsors NASCAR’s Cup Series, and Coke and Pepsi together have pouring rights at 23 Cup Series speedways. The Green Sheet included with this issue details Coca-Cola, PepsiCo and Keurig Dr Pepper sponsorships with major US professional sports organizations, as well as a synopsis of the state of play for each. Taken together, the potential impact from the loss of competition is material to a beverage industry that relies on emotion, tribalism, and spontaneity to drive sales and profit. 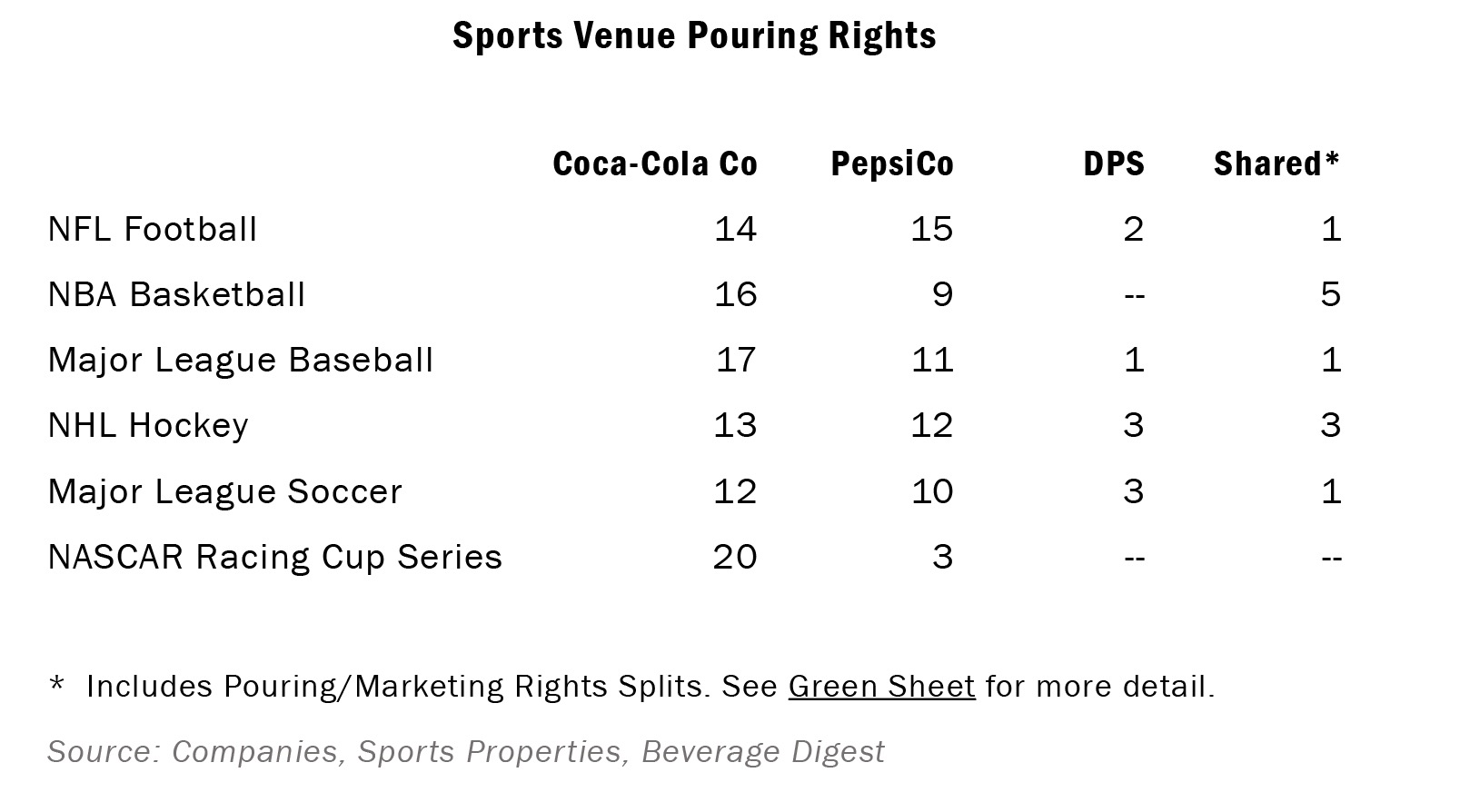 Billions Lost.  To get a deeper understanding of what has been lost and what is at stake, BD talked to Genesco Sports Enterprises CEO and Co-founder John Tatum, a 32-year sports marketing veteran who counts PepsiCo and AB InBev as clients. He has counted the days since the NBA became the first US league to suspend play, on what he now refers to as “3/11.” Last Friday marked Day 100. He estimates billions of dollars have been lost in the shutdown of the sports ecosystem. That includes roughly $1.1 billion for college basketball March Madness, sponsored by Coca-Cola. And $1 billion for NBA basketball games lost. At a “very conservative estimate” of $1 million in value per MLB game, Tatum said, the cancellation of half the roughly 2400 game season would total $1.2 billion in lost economic value. “I truly thought I had seen everything,” Tatum said. “I have never in 32 years seen nor experienced, nor remotely even thought that we would have the worst of economics and the worst of healthcare at the same damned time and shut the country down.”

Impacts.  Tatum said there are five components of the sports sponsorship ecosystem that brands can leverage to generate sales:

5) Major event sponsorships, such as the NFL Super Bowl

When it comes to team and venue sponsorships, the cancellation of games wipes out sales to fans at venues for sure. However, the bigger piece of business comes from all the incremental retail displays in the broader region around the venue, as brands leverage the sports team’s intellectual property. “The retail market is always going to be bigger and more important,” Tatum said. Even broader, companies such as PepsiCo have complex programs that leverage all five components of the sports sponsorship ecosystem. “If properties like the NFL or MLB teams are not playing, or the NBA or the NHL is operating in a bubble and not operating in the stadiums where PepsiCo has partnerships, then obviously there is a reduction of value,” Tatum said. “Depending on the product the league reconstitutes in Q4 -- whether it’s a playoff tournament in a bubble, or an abbreviated baseball season, or a shortened NFL season – it’s going to be directly correlated to the amount of incremental sales, retail activity and, therefore, ROI that these beverage partners can extract.” For Coca-Cola specifically, the impact is even greater when looking at events such as the 2020 Summer Olympics in Tokyo, which has been postponed a year to July 2021.

Pivoting.  Compressed seasons, consolidation of competition venues and fan-less games are forcing sports teams, venues and leagues to find other ways to create value for sponsors and broadcast partners, or to make concessions. “We’ve had 100 days of evaluation, renegotiation, recalibrating sponsorship values, and resetting strategies in some cases,” Tatum said. “We’ve also had 100 days of reflection that we still sell a lot of beer and a lot of soft drinks without doing sponsorships.” Creativity and innovation will be paramount, Tatum said. Signage, for example, could be maximized for television with tarps over empty seats that carry additional sponsor logos. “What are you doing to deliver an equal or better asset that is going to sell beer, sell soft drinks, sell salty snacks, sell product; because that’s what it’s about.” Using the fall of 2019 as a baseline, Tatum predicts sports venues won’t return to the same level of activity until at least the fall of 2021.

MLB Vacancy.  Meanwhile, Major League Baseball is without a headline beverage sponsor after Coca-Cola ended its partnership with the organization following a three-year stint. A source close to Coca-Cola said the company sees more value at the team level, where fans are more closely connected than with the league overall. Coke has pouring rights with 17 MLB teams and shares rights with Keurig Dr Pepper for the Texas Rangers. Coke took over rights from PepsiCo in 2017. PepsiCo has no current plans to take on the headline sponsorship, a spokesman told BD.