Pepsico Has Said It Remains the Exclusive Distributor of Bang in the US.

Given the high interest in the sudden dispute between Bang, one of the most important energy brands to emerge in recent years, and PepsiCo, a multinational food and beverage company, Bang’s emailed responses to BD’s questions have been included below in full, unedited.

PEPSICO RESPONSE. PepsiCo was given an opportunity to respond to specific assertions made by Bang. PepsiCo declined, referring BD to the company’s prior statement on Nov. 17: “We were disappointed to receive VPX’s notice of termination without cause, especially given the rapid success we’ve had in significantly expanding the presence and availability of Bang Energy drinks,” PepsiCo stated. “PepsiCo remains the exclusive distributor of Bang Energy drinks across the U.S. through October 2023. We will continue to fulfill our obligations under our agreement, which does not include any minimum purchase commitment. Serving our customers remains our top priority, while also defending and enforcing our exclusive rights granted in the agreement.”

BD’s questions, and Owoc’s answers on behalf of Bang follow:

Q: Can you clarify what happens in the three-year period between your termination and the effective date cited in your termination letter? PepsiCo contends nothing changes in that period, or at least very little?
A: Pepsi's termination was effective immediately over one month ago. Pepsi being fired and their contract terminated while "contending" that nothing changes is absurd. Pepsi has been legally terminated. This would be like you being fired by Beverage Digest and still showing up to work every day. Terminated means terminated. There exists no such thing as being partially terminated regardless of one's “contentions” or other misguided machinations of cognitive dissonance.

Q: In other words: Is PepsiCo no longer your exclusive master distributor starting now? Or in three years?
A: Termination of Bang Energy's exclusive distribution agreement was and is effective immediately on the effective date thereon over one month ago.

Q: Have you approached other distributors? If so, do they include ABI distributors that you previously worked with?
A: Other distributors have approached us. Bang was the hottest brand in 2019 averaging ~300% to ~400% growth per month and #1 in new growth in the energy category for roughly eight straight months. In 2020, however, Bang has never come even close to meeting energy category growth or new growth since Pepsi took over. In fact, under Pepsi, Bang Energy has ONLY experienced negative category growth. A large percentage of the Bang Energy 2019 Distribution System remained on board as distributor of Bang Energy Allied Brands which include the all new Redline 12oz Energy Beverage and NOO Fuzion etc. Furthermore, we have also brought additional best-in-class distributors on board to strengthen our current distributor network. Distributors see the poor execution in their markets and once the PepsiCo termination was public knowledge, my sales executives and sales force have received 100's of emails and the phone is ringing off the hook. It will not take very long to add best-in-class distribution. We're in the process of assembling a world class distribution system. This is explained in greater detail below, in response to one of your other questions.

Q: Have you begun actually moving distribution outside of PepsiCo?
A: No, we just sat around the campfire holding hands singing kumbaya hoping Kirk Tanner, Jim Lee and Hugh Johnston would execute on our joint business plan and execute on Pepsi's grandiose promises while letting our business be intentionally destroyed. [sarcasm intended]

Q: How will you ease the minds of national retailers who may be concerned now about a fragmented distribution system for Bang again?
A: The only fragmented distribution system retailers have to worry about is the fruitless and feckless Pepsi distribution system. Bang Energy has been vigorously ramping up our in house and third-party distribution system that was responsible for over $2 billion in sales. We went from distributing via company owned DSD in 4 states, which sold 14.8% of $1.28 billion in 2019 to 7 new DSD facilities in 11 states in 2020. Furthermore, we kept and are expanding key third party distributors for our allied brands like Redline, Noo Fuzion and Meltdown. If you think we were foolish enough to put all our trust in Pepsi without having a backup plan, you've simply may have lost your mind!

Q: You reference some issue with PepsiCo's work in your press release. I see no mention in the termination letter. Can you elaborate on the problems?
A: I strictly forbid my staff to focus on a problem. Our culture thrives on a principle I championed called, Solution and Execution -- meaning find a solution and execute. Therefore, we have no problems -- only solutions. The solution to Bang Energy's continued success was getting rid of Pepsi. PepsiCo failed to meet contractual and joint business plan commitments requiring Pepsi to do $2.1 billion in 2020 sales -- Pepsi failed miserably. Pepsi never even reached category growth in the energy drink IRI and Nielsen Data. Bang was setting record POSITIVE growth numbers in 2019 without Pepsi, but under Pepsi, Bang actually set NEGATIVE GROWTH RECORDS. Pepsi has always been sub-zero in Bang Energy category growth.

Bang used to have up to a 9.8% share of the energy drink category, but Pepsi has never even come close to this. Nevertheless, Pepsi sends out misleading letters falsely misrepresenting that Pepsi grew Bang Energy's business. Pepsi CEO, Kirk Tanner, CFO Hugh Johnston and Jim Lee are professional data spin masters. They're so used to spinning the data, that I believe they actually convince themselves that their delusions are real. This prompted me to send an email to Kirk Tanner and Hugh Johnston asking, "How does it feel to be so pathetic and feckless and wallow aimlessly and habitually in the stench of sub mediocrity?"

Q: Did you cancel a sales incentive scheme during Bang's launch into the Pepsi system? The bonus would have been paid to sales associates for getting an extra Bang cooler on the floor at retail etc.
A: The sales incentives were not cancelled and in fact are still going on. I will say, We have hundreds of pieces of photographic evidence demonstrating Pepsi reps took Bang Energy product out of Bang branded coolers and placed health-robbing Pepsi products into these Bang coolers. This is salacious and damaging to the sugar-free pristine image that took Bang 27 years to build. I have no idea what you are talking about in regard to sales. Let me answer your question with a question. My question is, don't you actually have to meet energy drink category growth and avoid negative growth and meet joint business plan objectives to get a bonus? You cannot be off joint business plan requirements by hundreds of millions of dollars and get a bonus, can you? You cannot take Bang Energy out of countless Bang coolers and get a bonus, can you? You cannot work for Pepsi and physically block a Bang Energy rep from going into a Bang Energy account and get a bonus, can you? You cannot tortiously interfere with our business, and harass and threaten Walmart, 7-Eleven, Publix, Quick Trip, Independent Pepsi Bottlers, GHRA, ARA, et al. and get a bonus, can you?

If you need further insight into the extreme dysfunction at Pepsi, look no further than Pepsi’s purchase of Rockstar. Pepsi purchasing Rockstar for $3.85 billion dollars plus $700 million in tax credits is arguably the worst deal in the history of the beverage industry! Since Pepsi’s purchase of Rockstar, Rockstar sales have plummeted to negative double digit growth almost every month. I’m not sure how Kirk Tanner, Hugh Johnston and Jim Lee still have a job after failing to perform with Bang Energy while also making the worst purchase i.e., Rockstar in modern history!

PepsiCo came to Bang in severe desperation. Rockstar energy drink was dying. Therefore, Pepsi had no real entrant in the wildly successful energy drink category. Their deceptive scheme was to purchase Rockstar in order to sell Bang. …or so they claimed. However, this was just a mirage. It was Pepsi’s “art of misdirection” scheme reminiscent of John Travolta in Swordfish. However, like the great Al Pacino says, “All is not as it appears to be.”

Pepsi knew that in order to stop Rockstar’s rapid descent into hell, Pepsi had to gain exclusive distribution of Bang. Why? Because the only possibly way for Rockstar to survive and PepsiCo to recoup its $4.55 billion was to either buy Bang or block Bang. By blocking and controlling Bang’s “…meteoric growth…” as Robert Ottenstein described Bang before Pepsi took over distribution, a delusion common only at Pepsi was that they could then revive Rockstar.

Pepsi paid roughly $4.55 billion for an energy drink whose sales drop double digits with almost every four-week IRI read. How long do you think shareholders are going to tolerate this nonsense? In fact, look at all energy drinks in the PEP portfolio – IRI Data indicates PepsiCo energy brands bleeding red including Bang Energy. Pepsi is trying their best to drive Bang into a meteoric descent and miserable death with their other energy drinks and we just aren’t going to let PepsiCo do that. Pepsi thinks that just because we signed a contract with them that they have the right to destroy Bang -- one of the greatest brands and American success stories of all time.

Bang is keenly aware of Pepsi’s block or buy strategy. No Pepsi, No Kirk, No Jim. You cannot buy and you cannot block Bang Energy! In fact, your fired PepsiCo!

Let this serve as a public warning to PepsiCo to cease and desist with tortiously interfering with Bang’s existing, extensive and esteemed customer network. Bang’s retail sales eclipsed $1.28 billion in 2019 before Pepsi ever touched our brand. You did not build Bang and we will not let you destroy us! Furthermore Pepsi, cease and desist with your fraud and bad faith.

Any retailers who need indemnification from Pepsi’s threats and harassment, please contact Bang Energy. Pepsi has been fired! Pepsi has been sent a letter of termination which you can access by clicking this link https://bangenergy.com/wp-content/uploads/2020/12/2020.10.23-Pepsi-Termination-Notice.pdf.

Any retailers like Quick Trip, whose sales of Bang Energy product have plummeted 4 million plus units, can make direct purchases from Bang Energy. PepsiCo has been terminated. PepsiCo is no longer the exclusive distributor of Bang Energy!

OWOC STATEMENT REGARDING INDEPENDENT PEPSICO BOTTLERS. “Bang Energy has had and continues to have a remarkable 11-year relationship with the Independent Pepsi Bottlers. Therefore, we sincerely expected PepsiCo to execute at an even higher level based on their enormous resources and grandiose promises. Unfortunately, we were blindsided and bamboozled.

PERFORMANCE. For context, BD has included the following tables and chart to provide a picture of Bang Energy’s performance before and after PepsiCo’s involvement. 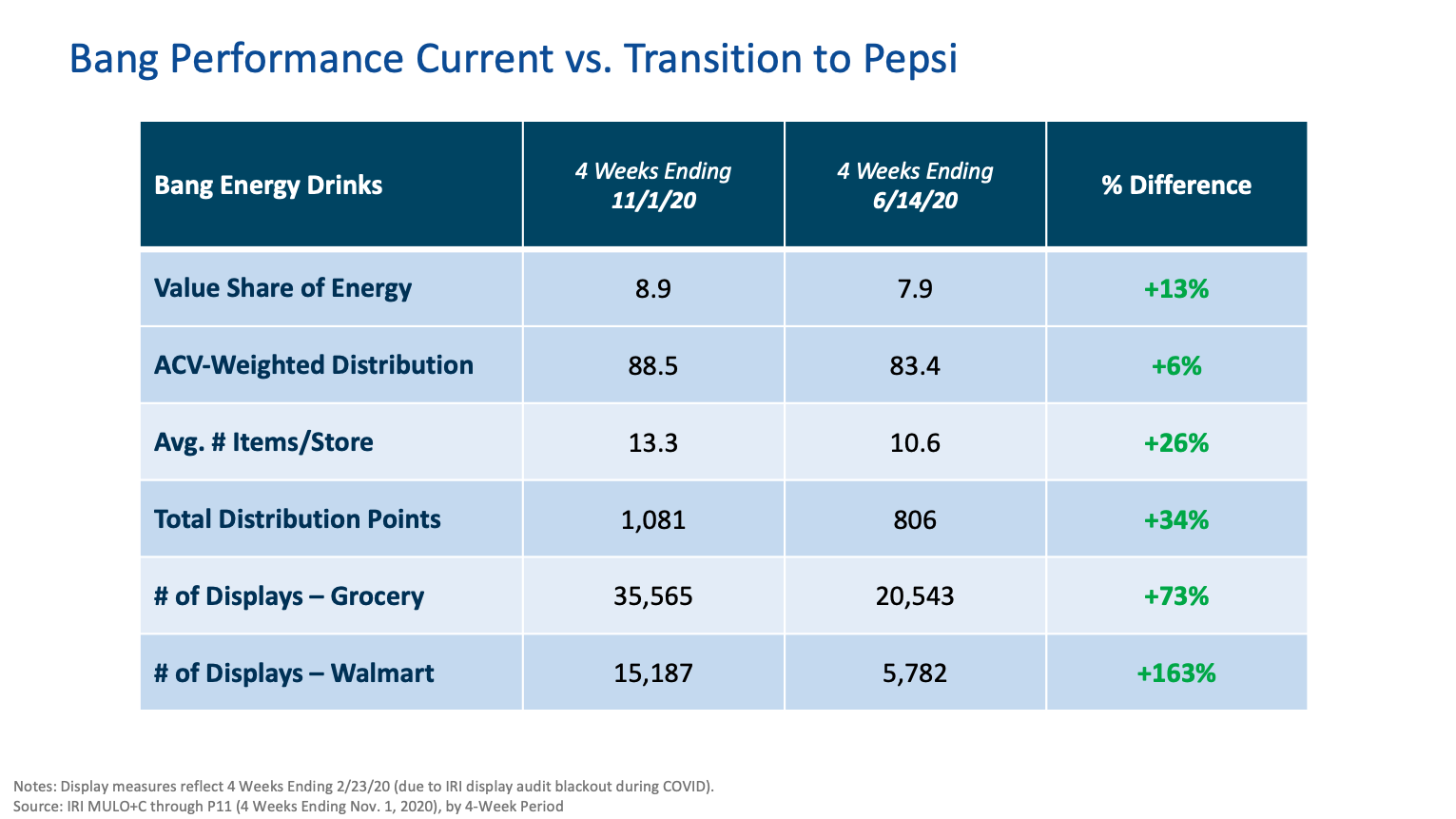 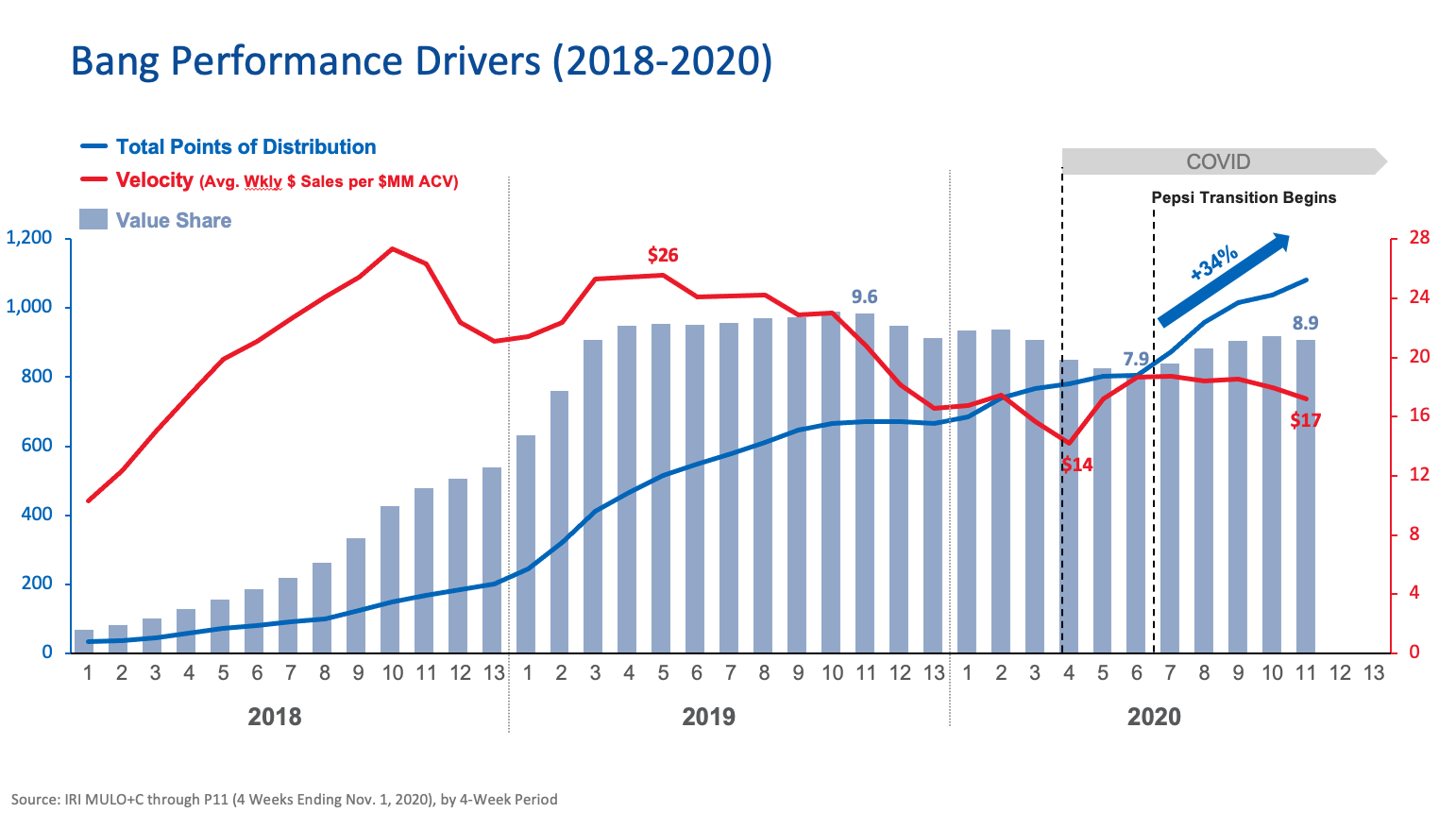