Coca-Cola, PepsiCo, and Keurig Dr Pepper all reported first-quarter earnings the week of April 25. The effect of inflationary pricing on consumer demand was a hot topic during earnings calls for investors. In an interview with BD, Coca-Cola CFO John Murphy summed
up a mood that was echoed all week: “The consumer so far in most of our large markets has not had a significant negative reaction,” he said. “But it’s the kind of topic that you’ve got to stay very close to.” Murphy also told BD that the second and third quarters of this year will be critical as consumers adjust to new economic pressures. Affordability using package sizes will be key, he said, in addition to strong consumer connection. “You have to earn the right to be able to take price with good marketing, good branding,” Murphy said.

The following is a recap of executives’ comments on consumer reaction to higher prices:

CEO James Quincey addressed an analyst’s question about “better than anticipated” price elasticity. “It has been apparent and other people have commented on less elasticity in recent times as price increases have gone through. I do not expect elasticities
to be inelastic going forward. There’s a reason it got the name elasticity,” he said. “Inflation generally ends with some pressure somewhere. I expect elasticities to increase at some point in the future. Will that be next quarter, or will that be next year? I can’t give you the answer to that because it’s very dependent on some macros and it’s probably going to vary by country.”

CEO Ramon Laguarta said soft drink demand has held up better than planned amid escalating prices in both developed and developing markets. “However, we think the consumer is very early in this process of adjusting to the new inflationary environment,” he said. “There are going to be consumer behaviors adapting to the new realities. There’s going to be, probably, packaging  mix changes and other decisions. Consumers will stop doing certain things they were doing, like going out more, maybe traveling, and so on. So, we think we’re early in the process.”
He added a note of confidence: “Our categories do normally quite well in inflationary [environments],” Laguarta said of both snacks and beverages. “We feel rather confident that we can manage through this with a good balance between net revenue management, holistic cost management. And our number one objective is to keep the consumers with our brands.”

Incoming CEO Ozan Dokmecioglu said the company has continued to innovate and invest in its brands, “which is one of the reasons why our elasticities have held up to this point very nicely.” He also said, “Inflation still looms as the greatest challenge and has proven difficult to forecast even for the experts.” He went on to say that the company has raised pricing and will add more if necessary. “We have and will continue to protect our marketing investment as we believe brand strength and stability to lessen pricing elasticity is a key competitive advantage for KDP,” he said.

CONVENIENCE CHANNEL RED FLAGS. In a May 2 research note, Consumer Edge Beverage Analyst Brett Cooper said energy drink sales growth slowed to +11.9% in the first quarter from +15.8% in the fourth quarter of last year. He attributed the deceleration in part to convenience store sales trends that have weakened “in the face of rising gas prices and general inflation.” And energy drink pricing is expected to rise even more to keep pace. “The pricing that we have seen from the energy category is far insufficient to cover input cost inflation,” Cooper said, adding that cost pressures will continue into the second half of 2023. BD notes that a meaningful convenience slowdown would likely affect the carbonated soft drink and sports drink categories as well. 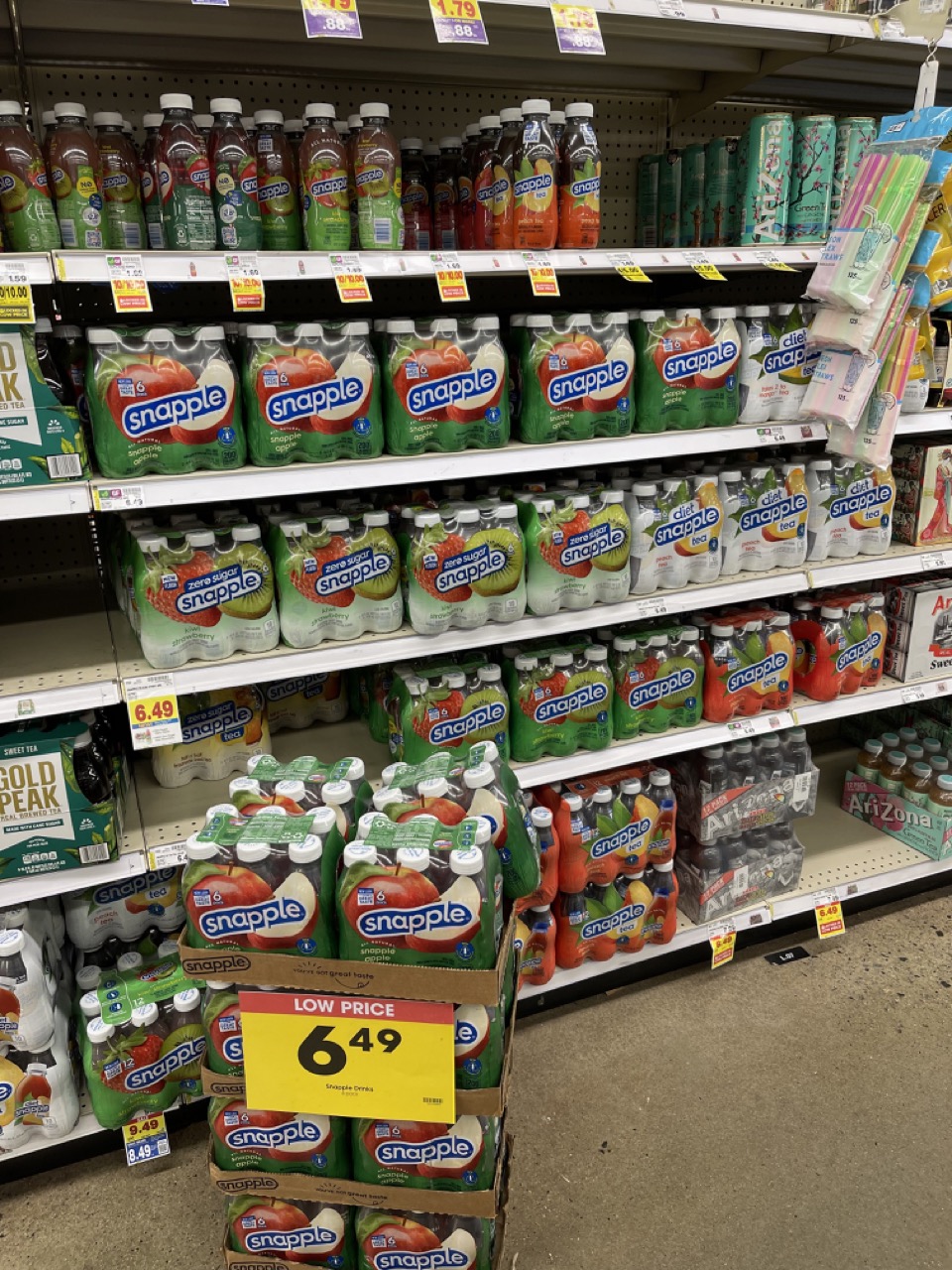 SNAPPLE PLAYING CATCH UP. Keurig Dr Pepper will increase Snapple pricing this summer in the range of +10%
to +15% depending on the product, BD has learned. Pricing growth for Snapple previously trailed the category, according to a source close to the brand. “We’re seeing positive market performance by Snapple as it’s growing retail dollar sales and taking back share,” a KDP spokeswoman said when reached about the increase. “Pricing is in line with the category, and we’re excited for a great summer with consumers reaching for their favorite Snapple flavor.”