As consumers face unprecedented 40-year-high price inflation for everything from gas to groceries, beverage industry watchers have kept their eyes on an important canary in the coal mine for branded drinks – growth in private label offerings. When consumers’ bank accounts are pressured, they look to lower-priced store brands to stretch the grocery budget. This year had been different, as shoppers for many packaged goods including beverages continued to reach for branded products. A/B Bernstein analyst Callum Elliot said in a June 17 research report that anticipating the inevitable private label surge was like “waiting for Godot,” a reference to a Samuel Beckett play in which two characters wait for another who never shows up. Elliot even noted a similar adherence to branded products in Europe, where trends generally augur what’s to come in the US. However, recent scanner evidence suggests Godot may have finally knocked. Nielsen retail scanner data published by Goldman Sachs for the four weeks ending July 16 show private label carbonated soft drinks on the move. As the table shows, private label CSD growth outperformed the category in dollar and volume sales. The same was true for the shorter 2-week period, and the longer 12-week period. On a 52- week basis, private label had far underperformed the category on dollar, volume, and pricing growth. 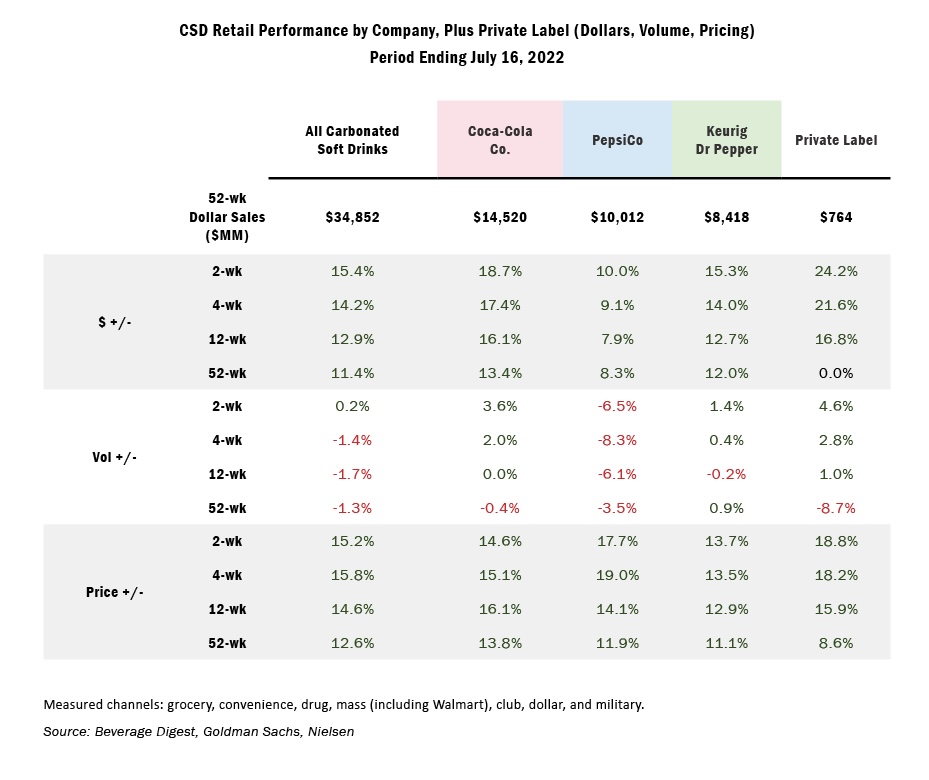 PERSPECTIVE. The growth acceleration by private label CSDs came despite the segment outpacing the category on pricing growth in each of the 2-week, 4-week, and 12-week periods. Generally, higher pricing from private label would slow demand, except for the fact that branded players have been raising prices at unprecedented levels to recover breakneck input cost increases. Those price increases appear to have maintained enough of a price gap between branded and private label products to continue to attract value-conscious consumers. If this trend holds, branded soft drink leaders Coca-Cola, PepsiCo, and Keurig Dr Pepper could be forced to slow pricing growth at a time of volatile cost of goods increases or succumb to accelerated volume declines.

PEPSI CHALLENGED. The same data reveals challenges for PepsiCo’s US CSD business versus rival Coca-Cola. Coke’s portfolio outperformed PepsiCo’s and the total category in the 4-week and 12-week periods by dollars and volume, as the table shows. While PepsiCo’s pricing outpaced that of Coca-Cola and the category during the 4-week period, the company trailed during the 12-week stretch. Keurig Dr Pepper also outperformed PepsiCo by dollars and volume in all periods shown.