When John Fieldly stepped into Celsius as CFO in 2012, things weren’t going well. He recalls being kicked out of Costco, which was responsible for about 60% of sales. The same thing happened at retailers including Walgreens, CVS, and Harris Teeter. The velocities just weren’t there for what was then a “negative calorie drink” that promised to help burn 100 calories a day and placed ads in People magazine showing “before and after” weight loss photos of consumers. “It’s retail,” he said. “You’ve got six months, or you’re gone.” How things have changed. As the table below shows, Celsius grew by a triple-digit percentage during the first half of this year, according to BD data. In the 12 weeks ending July 16, Celsius generated 34% of energy category growth, which was +8.0% in the period, Celsius has reported. The brand is sold in 169,000 locations, including Costco. And now publicly held parent company Celsius Holdings has signed a blockbuster distribution deal with PepsiCo. In an interview with BD, Fieldly, who became CEO in 2017, shared the key to the brand’s turnaround. “We realized that we had something a little bit more special here than a weight loss product,” he said. “Fitness is cool, hip, sexy, premium. You don’t go to the bar now to meet people, you go meet them at the gym.”

AGING DOWN. Celsius’ success has come in large part by appealing to both men and women ages 24 to 44, rather than simply the male-dominated 18 to 24 age group that has been the sweet spot for traditional energy drinks. While the brand’s roots are in gyms and health clubs, Celsius has broadened its lifestyle positioning as “essential energy for life inside and outside the gym,” which has resonated with consumers, Fieldly said. That message, with help from 1 million TikTok followers, is now resonating with college kids aged 18 to 24 who “don’t want their grandfather’s energy drink,” Fieldly said. With PepsiCo, whose distribution reached 61% of the college population, the college and university channel will be a key distribution push for the partnership, he added. 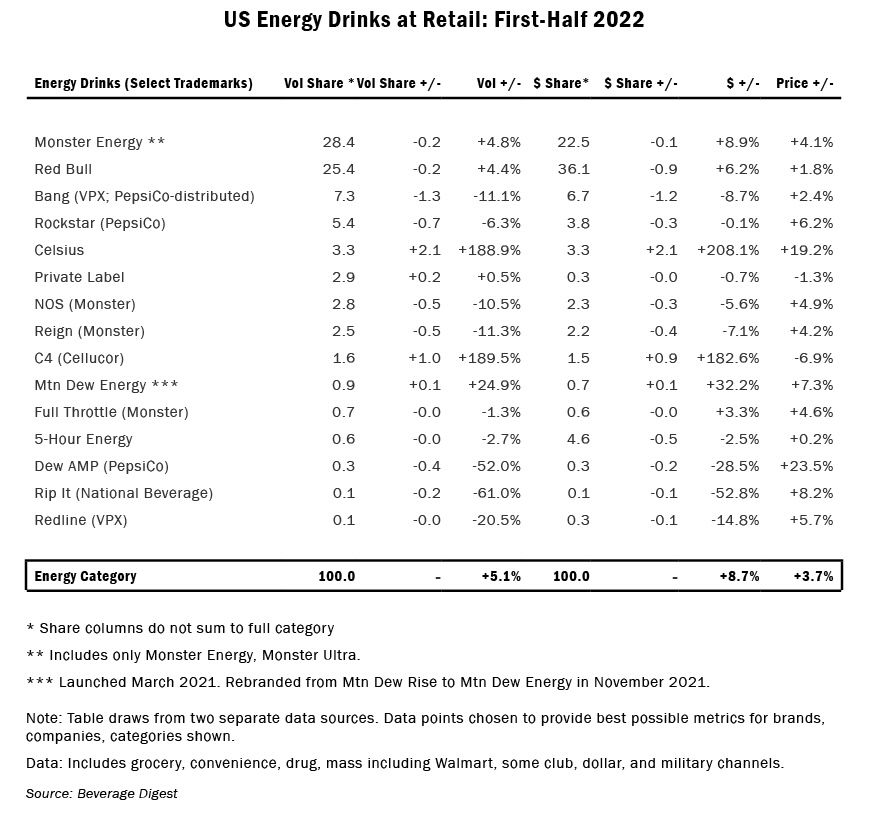 GROWTH PATH. Citing data from Numerator, Fieldly said 50% of Celsius’ growth comes from increased consumption by existing consumers. About 26% comes from newcomers to the category, and 24% comes from those who switch to Celsius from another brand. Fieldly said the brand’s ability to pull consumers into the category for the first time, coupled with wider availability, has been transformative. He credited Coca-Cola’s discontinued Coca-Cola Energy for helping to draw soda drinkers into the category, and he said Mtn Dew Energy will do the same. Fieldly also pointed out that much of the brand’s sales come from ambient displays. “You know how hard it is to sell consumers warm drinks,” he said. “It’s very difficult.” That’s why getting access to 50,000 to 70,000 PepsiCo cold drink coolers will be so important, he said. Celsius currently owns 2,700 coolers. Part of the capital PepsiCo will invest as part of the deal with help Celsius boost its number of owned coolers. Separately, Celsius will get access to 100,000 independent retailers who are part of PepsiCo’s customer loyalty program. All told, Celsius estimates the PepsiCo partnership will increase distribution by +40% during the next 12 months over the company’s existing internal forecast without the deal, Fieldly said. Celsius’ current distribution includes about 82,000 stores in the US convenience channel, which in total has about 450,000 outlets, Fieldly said. “That’s a big opportunity with PepsiCo,” he said. “And they’re wired in those convenience stores.”

FOODSERVICE. Fieldly said the brand’s distribution through the Anheuser-Busch network has shown the brand has legs in foodservice as well. “People are buying Celsius with a lunch item,” he said. “So that gets us really excited about PepsiCo and going after foodservice in a big way.”

BANG-PEPSICO DIVORCE. Fieldly acknowledges the events of the past two years would have been hard to predict. When Bang Energy left Anheuser-Busch and other direct store delivery distributors to sign on with PepsiCo, Celsius moved in to fill the void, ramped up sales, and grabbed the industry’s attention as a fast-growing sensation. Now that Bang and PepsiCo’s partnership has fallen apart, Celsius is capitalizing again. “Abraham Lincoln always said, ‘Things may come to those who wait, but only those things left by those who hustle,’” Fieldly said. “We’re a highly caffeinated bunch here. With those opportunities, you’ve got to be able to react and execute.” Celsius had struggled to build a national distribution network and faced regular out of stocks as it used mostly warehouse delivery, he said. When Bang jumped to PepsiCo, the Celsius team rushed in to fill the void with their product. “I was signing contracts like every half hour as soon as the flood gates opened,” Fieldly recalled. “It was crazy. That printer was going, I’m signing, and we added over 100-and-something distributors in like 30 days.” After the messy and public termination of PepsiCo by Bang, Fieldly said he assumed PepsiCo would be done with allied brands. “I was thinking PepsiCo at that point was going to be so scarred that it’s either going to be a  takeout or nothing at that point,” he said. “I kind of thought they were going to be wounded on the whole thing.” Then PepsiCo reached out near the end of June with interest in a distribution partnership. After a “fire drill,” the deal was done by Aug. 1 to get distribution underway before Bang exited PepsiCo’s system on Oct 1, Fieldly said.

PROTECTIONS. Fieldly said negotiations with PepsiCo explored various deal “tactics”
before one was settled on. “We couldn’t get a Rockstar agreement, unfortunately,” he said, referencing PepsiCo’s distribution agreement decades ago with Rockstar that gave the brand exclusive energy rights to PepsiCo’s system. “They are pretty savvy on what they will sign and not sign these days.” Celsius wanted an investment “to make sure investment interests aligned,” he said. They also got a board member, who will be PepsiCo Beverages North America Chief Strategy and Transformation Officer Jim Lee. Celsius already has several team members who are former PepsiCo sales execs, some of whom helped build Rockstar. “That’s going to give us a competitive advantage,” Fieldly said. In Early August, Celsius and PepsiCo created a joint business plan to hit the ground running, Fieldly said, adding, “It’s going to be a great partnership.”

INTERNATIONAL. The deal with PepsiCo includes international expansion. Current countries include Sweden, Norway, and some Asian markets. With PepsiCo, UK and Germany “are top on our list” for expansion, Fieldly said, with a “safe” estimate being 24 to 48 months. “We’re going to be cognizant on our rollout to make sure its methodical and to build that loyal consumer.” He added: “The immediate focus right now is North America.”