Darren Rovell, the journalist, investor, and social media influencer who wrote the literal book on Gatorade, is bringing heat to the fast-growing canned cocktail market. Rovell, who has 2 million Twitter followers and is credited with introducing the late Kobe Bryant to BodyArmor co-founder Mike Repole, had his lightbulb moment 10 months ago while drinking spicy cocktails. That inspiration has since led to a brand called KickStand Cocktails and a newly landed $2 million investment round. The ready-to-drink cocktail blends vodka and fruit juice with artisanal spice, which Rovell says is the key differentiator. KickStand enters a canned cocktail market that is expected to grow by an average of +11.6% through the next decade, according to researcher Future Market Insights. As consumers move on from the hard seltzer craze to spirits-based canned cocktails, the category is attracting market activity from entrepreneurs, large beverage companies including Coca-Cola, and established celebrities or personalities like Rovell. In addition, 2021 survey research by Mintel found that RTD cocktail consumers overindex for interest in spicy flavors like chili, with 23% saying “spicy” was one of the flavor attributes they prefer. KickStand contains sugar only from juice and no artificial ingredients. Offered in a matte black 12-oz slim can (to stand out in a sea of white- and bright-colored cans from the hard seltzer craze, says Rovell), KickStand contains 105 calories, 3.3g of carbs, and a moderate 5.5% ABV (for comparison, Michelob Ultra contains 95 calories, 2.6g of carbs, and a 4.2% ABV). KickStand recently debuted in three flavors, with heat signatures indicated by a pepper scale on the can and exterior packaging: Roasted jalapeño Cucumber (mild), Charred Pineapple Poblano (medium), and Torched Peach Chipotle (hot). The brand will introduce a fourth flavor soon and plans two versions with other base spirits. Messaging on the package makes clear Rovell’s formula for the product – “Real Spirits. Crushable Spice.”

INVESTORS.  Just this week, Rovell and his COO Ben Reilley closed a Series A funding round that was north of $2 million, Rovell told BD. Investors include brothers and NFL stars JJ Watt and TJ Watt, along with their wives Kealia and Dani respectively; former NFL star Eddie George and his wife Taj; and former NFL star and current sports analyst AJ Hawk and his wife Laura. Rovell is KickStand’s majority shareholder and main investor. The new capital will fund an aggressive retail and event sampling program, which is the priority for a brand whose mantra is “Try Us. You’ll Buy Us,” said Rovell, who will employ his substantial social media reach. The company also will hire full-time staff, most of whom are already involved in the business. Seeing the growing interest in ready-to-drink cocktails, hard seltzers, and flavored malt beverages by major companies ranging from Constellation Brands and Anheuser-Busch to Coca-Cola and PepsiCo, Rovell hired an exit strategist from the start of his venture. “It is great timing from a standpoint of non-alcoholic companies being so interested in building an alcohol distribution portfolio and understanding they can’t do this with only their brands.” Rovell said. “If I can get a deal that makes sense, I’m interested.” He added, “Right now I’m focused on distribution. If I get the right distributor with the right players, it’s a win-win.”

GENESIS.  Rovell, who lives in New Jersey, made a name for himself as a sports business journalist in large part through social media, where he relishes being a polarizing voice. In addition to his 2 million Twitter followers, Rovell has cultivated 52,000 followers on Instagram, a key social media channel for startup brands. He has reported for both ESPN and CNBC and is currently a senior executive producer and reporter for the Action Network, a media company focused on sports gambling that was acquired last year for $240 million by a similar media group. Separately, he buys and sells memorabilia and other historical documents, including sports tickets. Rovell, who says he isn’t a heavy drinker, was on his fifth cucumber jalapeño cocktail at trendy Beauty & Essex on the Lower East Side of Manhattan when he realized the fourth round had been much spicier than the others. “I thought, ‘Was it the wrong bartender?’” Rovell realized the challenge for bartenders was the pepper itself. “It’s nearly impossible to guarantee the consistency of each jalapeno,” he said. Industry data and consumer trends toward spicier foods and beverages led Rovell to conclude that the market needed a consistently spiced canned cocktail with a predictable heat level. He wanted an alcohol level that allowed a consumer to drink several cans in a single sitting without getting overly inebriated or overheating their mouth. Plus, the drink shouldn’t overpower foods, or send consumers over the edge while eating Buffalo hot wings. “Most canned cocktails in the market do not pair well with food because they overwhelm the palette,” Rovell said. “KickStand cocktails pair well with all foods.” Kickstand tones down the carbonation to provide a “smoothness when you sip, rather than overwhelming carbonation,” Rovell said. “It makes no sense to me that you open a can and burp.” Rovell has applied to trademark the word “crushable,” used by beer drinkers to mean a drink goes down easy. He says the word reinforces the “drinkability” of Kickstand for those who could be intimidated by the word “spice.” KickStand’s target audience is between the ages of 28 and 50, rather than the college crowd. “It’s the upgrade-your-drink demographic. People who aren’t drinking just to get drunk,” Rovell said, adding that the core KickStand consumer is “at the stage of life now where you’ve finally put a jalapeño in your drink.” Rovell said the drink so far is attracting even more women than men, despite the heat, and the brand will play to men and women, not just to a testosterone-fueled audience. “KickStand sales models are in tennis dresses and t-shirts,” he said. “It’s not about oversexualizing. Our sales reps will be women and men.” 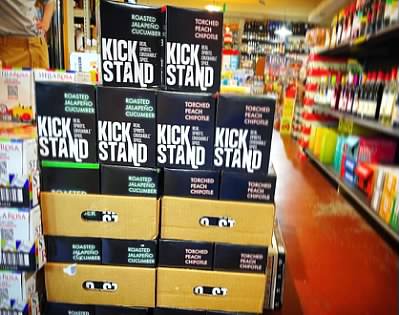 POOLING EXPERTISE.  Rovell has learned his way around the beverage market by proximity. He was reporting on the business of sports for ESPN in 2005 when he published the book, “First in Thirst: How Gatorade Turned the Science of Sweat Into a Cultural Phenomenon.” In 2012, Rovell introduced BodyArmor Co-Founder Mike Repole to NBA basketball star and entrepreneur Kobe Bryant. That introduction led to a long-term investment partnership between Bryant and BodyArmor that would help propel the brand to an eventual $5.6 billion full acquisition by Coca-Cola, Repole has said. In 2017, Rovell co-founded the venture fund Tastemaker Capital to invest in food and beverage brands with money from “a curated roster of professional athletes, sports team executives, influencers, high net worth family offices, and leading executives from various industries,” according to Rovell. In 2020, Tastemaker and Rovell invested in non-alcoholic beer brand Athletic Brewing, which was ranked by Inc Magazine this year as the 26th fastest growing private company in the US after a three-year revenue growth spurt of more than +13,000%. Rovell said he didn’t set out to create a beverage brand, but when the idea to create a spicy canned cocktail came to him, he realized he was ready. “This is fate,” he said. “I am at the point in my life where I understand the business.” Rovell believed he understood brands, having built his own and covered some of the largest like Nike and Gatorade, and he knew he had an iPhone full of connections fostered over so many years. “I understand brand structure, bureaucracy, credibility,” he said. “My name means just as much, if not more, behind the scenes as it does in social media.” Rovell saw opportunity on store shelves as the red-hot hard seltzer market cooled this year. “The space is opening up,” he said. “I now have the room to get in.” Once he got to work, he had a brand and product ready in six months, he said.

BUILDING A BRAND, PRODUCT, DISTRIBUTION.  If Rovell has a sherpa in the business, or at least a truthteller, it might be BodyArmor’s Repole. “He’s the bluntest individual out there,” Rovell said. “He’ll say something like, “Do you realize you have to work 24/7 to win here?’” (Repole, who recently launched his own canned cocktail line called Casa Azul with his longtime entrepreneurial partner Lance Collins, is not an investor in KickStand). One thing Rovell was sure of was that his brand had to have “kick” in the name, in part to connote the kick of the spice. “KickStand just came to me,” he said, adding that the word “stand” just sounded good to him. “You create the meaning by building the brand.” Rovell teamed up with co-packer Four Birds Distilling in Pennsylvania to produce KickStand. Four Birds is KickStand’s flavor house, packager, supply chain manager, and shipper. The plant has capacity to produce millions of cans of KickStand a year if needed, Rovell said. The nascent brand has so far reached about 100 stores and bars, mostly in and around Nashville. Other states include Pennsylvania, New Jersey, and New York. Ohio will be launched in about three weeks, said Rovell, who expects to be in 10 to 15 states by next summer. Distributors include Lipman Brothers in Tennessee, as well as Southeast Beverage and Beverage Distributors in Ohio. Following strong consumer testing among Hispanics, who showed an affinity for spice, KickStand initially expected to focus on Hispanic markets in cities such as Los Angeles and San Diego. “We realized we can’t just pick these,” Rovell said, referring to complex state-by-state laws regulating alcoholic beverages in the US. “Plus, distance matters to an upstart company where we need to aggregate marketing.” 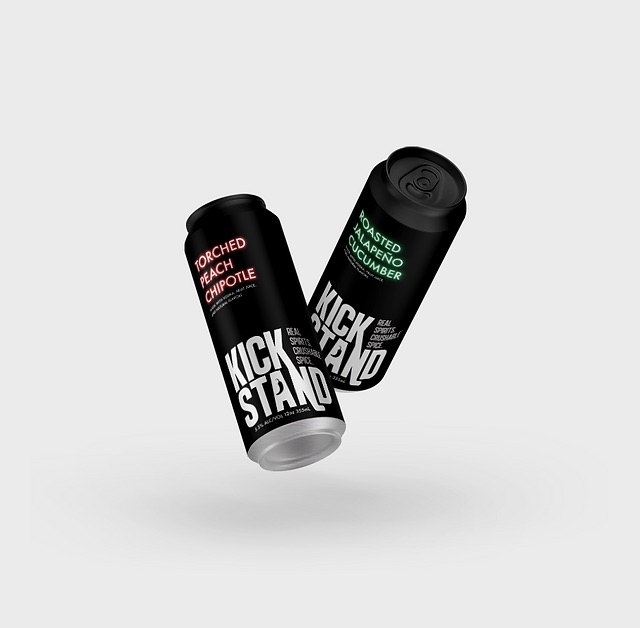 PRICING.  At retail, KickStand will be priced at $11.99 to $12.99 per four-pack, depending on the state and outlet. Some markets may go as high as $13.99, depending on the excise tax level, Rovell said, adding that he wants the product to be in an “affordable premium” range. Earlier this week, KickStand launched direct-to-consumer sales in Pennsylvania. Pricing is $30 for eight cans, $40 for 12, and $50 for 16, including free shipping to encourage sampling. “In alcohol, it’s very rare to have DTC pricing that is competitive to the store,” Rovell said.