CSDs Accelerate. Carbonated soft drink dollar sales jumped +3.2% in the four weeks ended Oct. 5, according to Nielsen retail data published by Morgan Stanley. That was faster than the two-year average (+2.7%) and 12-week period (+2.8%). The four-week gain for CSDs came on volume Dollar Sales Results at Retail that grew +0.6% and pricing that increased +2.6% (not shown). Four-week dollar sales for sports drinks, energy drinks and teas also accelerated, while bottled water decelerated. 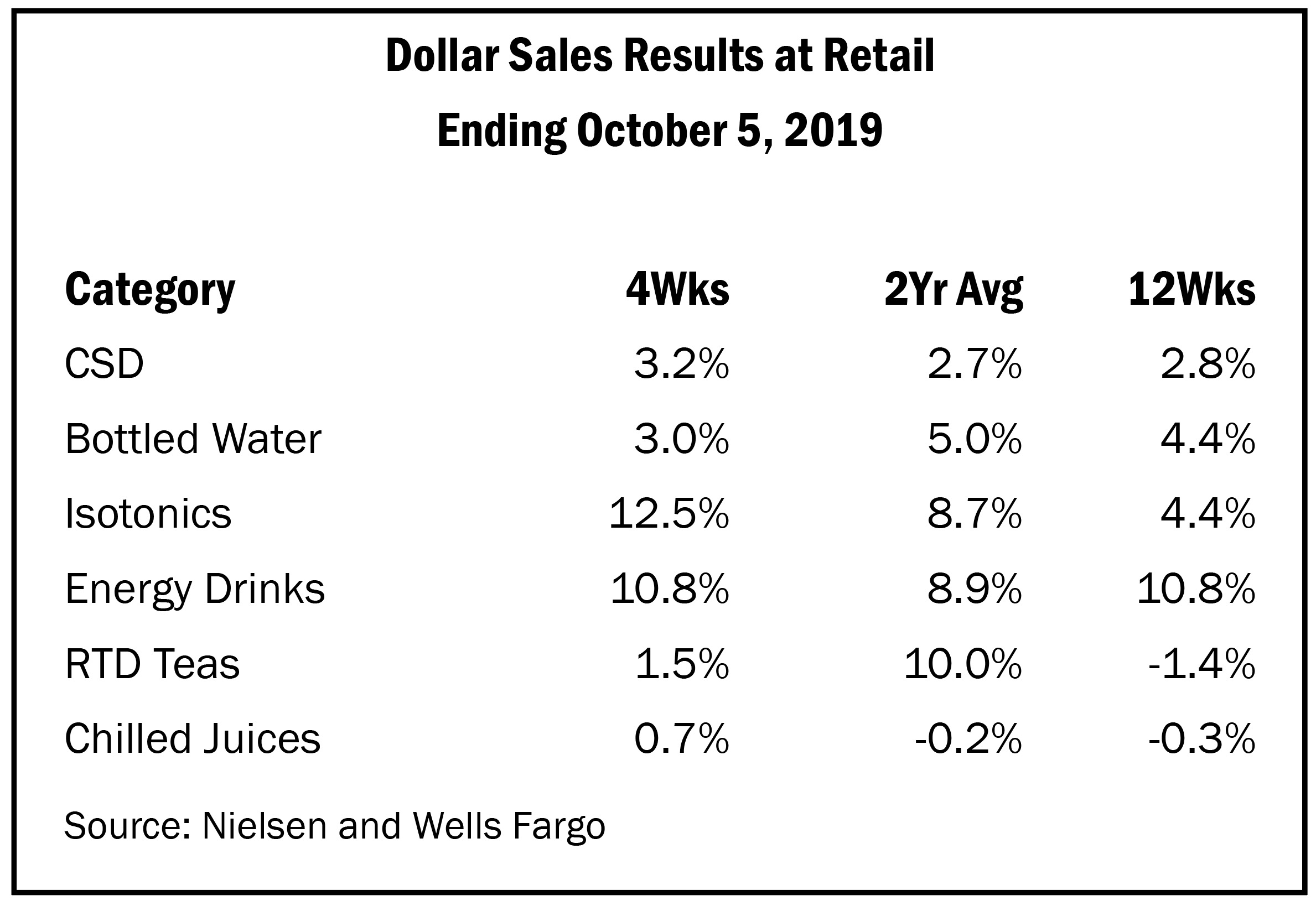 7-Eleven Innovation. The world’s largest convenience retail chain will host its second annual Brands With Heart event, allowing 65 “up-and- coming” brands to showcase their products for the chain’s executives. The retailer has been ahead of the curve in recent years tapping into emerging categories such as kombucha, some of which aren’t immediately associated with the channel. The event, at 7-Eleven’s Irving, Texas headquarters on Oct. 22-23, will include workshops, a product expo and keynote addresses by 7-Eleven Chief Merchandising Officer Jack Stout and serial beverage entrepreneur Lance Collins (Fuze, Core, Bodyarmor, A Shoc).

Illycaffe US. The Italy-based Illycaffe is looking to operate as many as 200 US cafes within five years (up from 23 in North America currently), Reuters reported. The company, which also sells roast and ready-to-drink coffee products, has hired Goldman Sachs to help find a US partner to assist in the expansion. The news follows Coca- Cola’s acquisition earlier this year of the UK-based coffee chain Costa. While Coke CEO James Quincey has downplayed the possibility of adding Costa cafes in the US, Illycaffe’s plan suggests there is room in the US for challengers to Starbucks.

Launches, Expansions. Ocean Spray has debuted its first new brand, Atoka, under its Lighthouse incubator … … US restaurants are offering a larger variety of beverages, and average sugar content is increasing, according to a new study by the American Journal of Preventative Medicine … Amazon is moving forward with its plan to open a chain of US grocery stores, with early trials in LA, Chicago, and Philadelphia, signing over a dozen leases in the Los Angeles area recently … Nestlé USA will introduce a line of coconut water drinks in January under its Outshine brand of frozen fruit bars.

Regulation, Taxes. Singapore has said it will ban advertising for high-sugar drinks and make front-of-pack nutrition labels mandatory. Singapore, one of Asia’s biggest per-capita consumers of sugar, according to Bloomberg, would be the first country to impose such advertising restrictions. The government also is considering a tax on high-sugar beverages or an outright ban. Plus. Beverages such as water, low-fat milk, and juice will now be the default option for children’s restaurant meals in Philadelphia, due to legislation signed by Philadelphia mayor Jim Kenney … Washington DC has increased a grocery sales tax rate for sweetened beverages to 8% from the standard 6%; the change to the sales tax rate did not require a vote by the public.

Pepsi Out of Indonesia. PepsiCo and its Indonesian distribution partner, Anugerah Indofood Barokah Makmur, have cut ties, citing “commercial reasons,” according to local news reports. PepsiCo discontinued distribution in the market as of Oct. 10, saying it may return with Pepsi, Miranda, 7Up and Mtn Dew. Both Pizza Hut and KFC stopped serving Pepsi products as of Oct. 1, with KFC confirming a switch to Coke, according to reports. PepsiCo historically had a small share of the Indonesian market.

Correction. An article in the Sept. 17 edition of BD incorrectly listed Louisiana as one of the states in which Coca-Cola Southwest Beverages operates. The state should have been listed as Arkansas. We regret the error.

Quick Takes. A Washington DC judge has ruled that a lawsuit by the advocacy group Praxis Project and two pastors must proceed; the suits alleges that Coke’s marketing misled consumers about the health effects of sugar-sweetened beverages … In UK, Diet Coke is once again using pink cans in recognition of Breast Cancer Awareness Month … BD has confirmed that Fairlife products were pulled nationally from shelves at 7-Eleven following June complaints of animal abuse at a dairy farm that supplied Fairlife; the products have since been restocked, Fairlife confirmed … A Florida woman who recently turned 107 years old has credited her longevity to a daily habit – Coca-Cola.