As COVID-19 home lockdowns drag on, beverage bottlers in the Coke, Pepsi, Dr Pepper and independent beverage distribution systems have seen large store sales slow in April compared to the extreme stock-up buying by consumers last month, according to BD’s ongoing informal survey. Bottlers are increasingly concerned about the shift to future consumption from immediate consumption, which has pressured profit margins. The following are comments from bottlers since late last week, organized by topic:

“Future consumption softened some, but good. Cold drink in general is on life support.”

“Our immediate consumption business is lagging primarily from large at-work places having stricter rules on outside vendors coming into their business. Also, many of our large at-work customers are shut down. The largest impact in our immediate consumption business is coming from our education channel. We have officially ended the school year in our state.”

“Business is up but after the peak, it has been softening. 20-oz has fallen off a cliff.”

“Future consumption volume is softening this week after stock up, moving to more core SKUs. 20-oz business is dead. Even shoppers in the check-out lane won’t reach into cooler for a cold drink. More grocery retailers are requesting [only] one shopper per cart. We’re surprised that shoppers aren’t choosing 2-liter. My guess is that consumer use of 2-liter is more often purchased for gatherings and those aren’t happening.”

“Sales for the month are up around +3%. Margins down. We have some convenience retail chains down -30% for the month.  20-oz down around -25%. Sales towards the end of this week [April 5-11] seem to be improving. Large store and Walmart up double-digit in sales.”

“Sales are beginning to slow but not by much. Our higher margin packages are suffering the most.”

“Things are slowing down. We are laying nobody off regardless. “

“Our large format business remains strong but not enough to offset our foodservice and small format business. Prior to the stay at home orders, our gas station business was strong, but it has faded considerably.”

Our soda business is still up in April so far, but margins are down roughly 10%.

“On-premise is a disaster.”

“Drive-through and fast casual restaurants are doing well. The problem is that while people are supporting small business with to-go and pick-up orders, normally a drink is not included in that call-in food order.”

“Food vending cut in half.”

“[Generally, headed into Easter,] retailers and distributors for the most part are not wasting marketing dollars and promo spend, given the influx in traffic. So, a normal Easter sale brings big can buys. This week we are seeing more PET and buy-three offers.”

“The industry needs to balance margin by pulling back on some promos in the home market to keep bottlers healthy.”

“We are trying to balance promotions that will work with where the consumers are.”

“The supply chain overall has functioned smoothly as we expanded to handle the initial surge in sales, and now that sales have returned to more normal levels -- with sizable increases in some categories offsetting meaningful declines in others. There have been some potential shortages or concerns, but nothing has had an impact on the business in the marketplace at this point.”

“Can shortage was going to happen regardless of this crisis. We are hearing it’s coming, but we have not been affected yet. We are most likely three to four weeks away from a reduction in aluminum. Product supply for the most part has been good. Water was an issue in the beginning, but we had put stress on the production across the country in the matter of days.”

“The unusual surge in can volume for this time of year constrained the can manufacturers, but they are doing their best to supply the system. SKU reductions have assisted in reallocating can volumes.”

“Our mini-can sourcing has been tough. We think aluminum can body scarcity may not be a problem as initially thought. Optimistic about can availability on core [products].

“All [aluminum] can bodies may have an issue but, as of now, none.”

“Cans are tight. With the shutdown of beer in Mexico, there should be additional capacity. We produce our own pre-forms for our facilities. Therefore, our greatest need is resin, which is in ample supply at present.”

“Rumor that caps were short but cannot confirm.”

“We do have some out-of-stock issues on raw materials, mostly driven by a very big March. It will normalize moving forward to some degree.”

“The biggest issue is getting enough aluminum can supply, and shifting production from bottles to cans. Our sparkling can volume is up almost +50% since March.”

“We have partnered with a local food delivery service who offers 20-oz with orders placed. Nice up-sell model that is doing just ok. We are exploring more 20-oz offerings at our restaurants to make it easier to handle the product versus a fountain, but our FSOP [food service on-premise] team is also helping merchandise and keep our large customers stocked, so their time has shifted slightly to where the business is right now.”

[To help offset immediate consumption slowdown]: “Warm 20-oz in dump bins. BOGOS on 20-oz and other combo deals in grocery and convenience retail. FSOP teams offering 20-oz to local restaurants to sell with curbside and drive-thru.”

“We are placing banners for food service customers to communicate their online and takeout business.”

“Retailers are adjusting store hours and customer counts in the store, which is helping us maintain the shelf faster and obviously keep our people safe.”

“We are flexing resources each day as needed, to best utilize hours and focus on the work needing to get done.”

“We’ve moved on-premise reps from salary to hourly, since their ability to reach goals has evaporated. We’ve partnered with on-premise customers to align with takeout orders.”

“Strongly encouraging our people to wear face masks while out in the trade.”

“No magic tricks. It’s all about cash flow management. We are reducing slow-moving SKUs so we can fill the shelves with faster-moving SKUs.”

“Having to shift people around to cover volume gains and losses.”

DATA.  The table below was compiled using retail data provided by Nielsen. The data show sales performance for a number of beverage categories during the crisis.

E-COMMERCE.  According to one source late last week: A major retail chain saw its click-and-collect business grow +8% during the past three weeks. The channel was growing by less than +4% previously. Separately, a grocery delivery platform the source collaborates with saw a +40% jump in new account sign ups in recent weeks. The platform also doubled the number of daily deliveries and average basket size was up more than +15% year-over-year. During the crisis, the same company recorded a +600% increase in searches for water, a +300% increase for coffee and a +150% increase for apple juice. 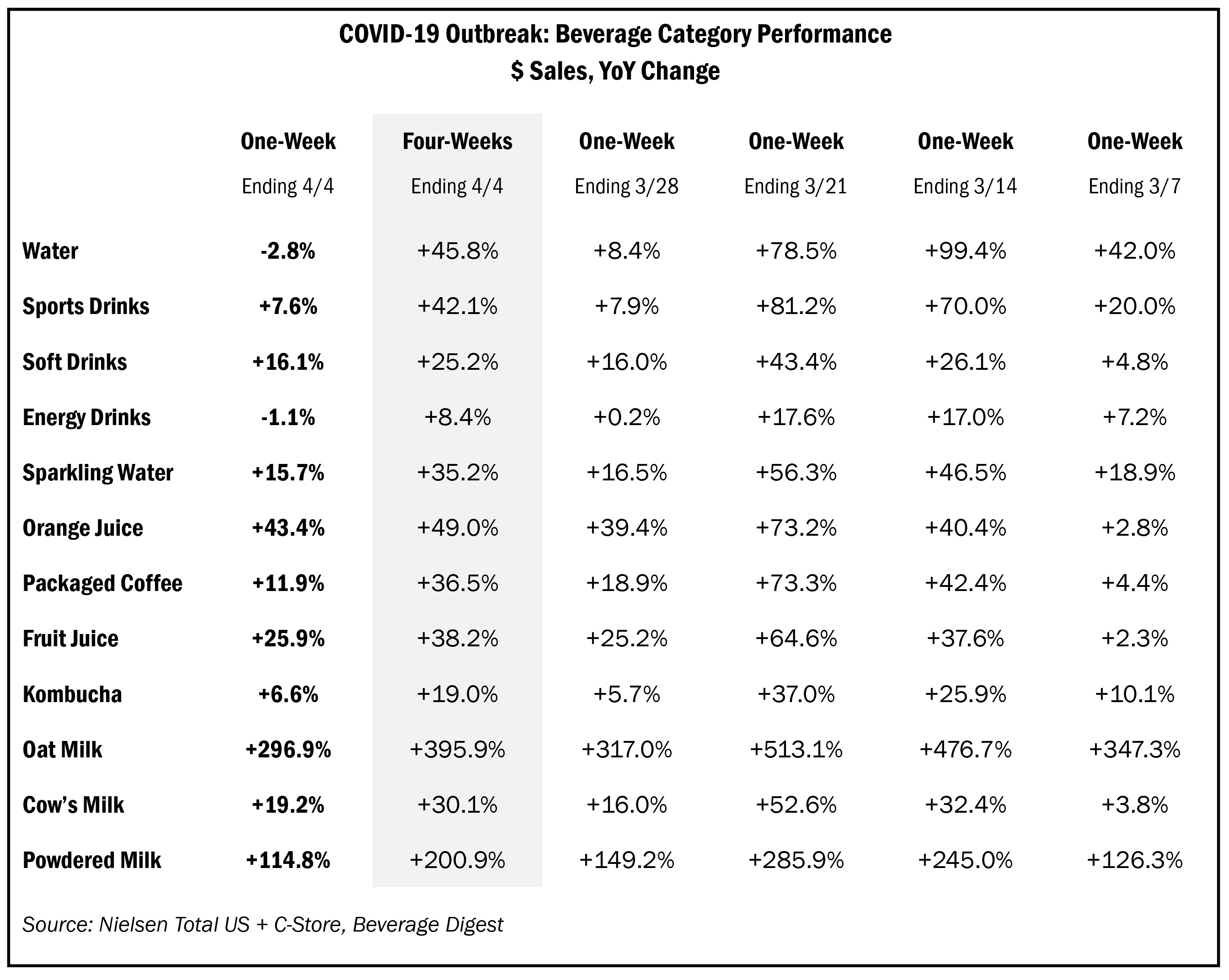