With the global COVID-19 pandemic continuing to spread, Beverage Digest held the first ever virtual version of its annual Future Smarts conference. The Dec. 7 live streamed event featured 11 speakers, including executives from Coca-Cola, PepsiCo, Keurig Dr Pepper, Nestlé Waters and Molson Coors Beverage. Speakers from Coca-Cola United, Kitu Life, Lemon Perfect, and PureCircle offered insights on everything from distribution to consumer trends. Much of the day’s conversation, including with analysts from Goldman Sachs and RBC Capital Markets, centered on how companies might emerge stronger from this year’s pandemic-related disruption. To view on-demand videos of conference sessions for a limited time, register HERE. The following are highlights from the top three US-based publicly traded non-alcoholic beverage companies on the program.

Plus, What’s Next for Costa Coffee?

During a live streamed interview, Coca-Cola COO Brian Smith dove deeper into the strategy behind Coca-Cola’s global reorganization now under way. A key outcome, according to Smith, will be the ability to more effectively scale innovation and brands globally. “We’ve gotten to where we are, successfully, over the last 100 years by delegating a lot of authority to the geographies,” Smith said. “And they, with the bottlers, were able to build our business, and our business was built differently in different places around world. But we’ve gotten to a point now where it’s really difficult to scale things.” The solution, Smith said, is to move away from autonomous geographic units to a structure where category-focused groups cut across the various global operating units. Such a fix eliminates “resistance to scaling the big things,” he said, while “prioritizing getting rid of the long tail of brands, so we can focus on those that generate cash flow and revenue and profits for the system.” Smith pointed to his time leading business units in Brazil and Mexico. While he had plenty of autonomy to build those businesses, he wasn’t “necessarily connecting across the whole globe to be able to scale those things that were working in one place or another,” Smith said. “In fact, the way we were organized sort of pre-empted that optimizing of our geographies.” The latter is now a major focus of the reorganization Smith is leading for CEO James Quincey. 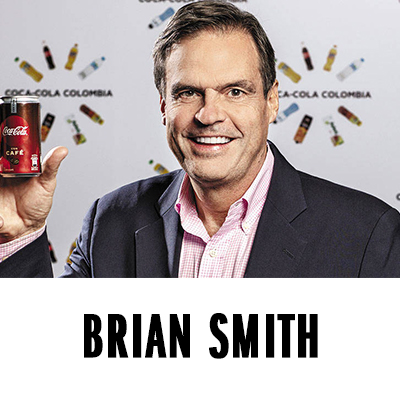 VENTURING & EMERGING BRANDS. Smith said VEB’s mission around “emerging” will have a centralized role in the marketing organization and be “redeployed in each of the operating units” to pursue emerging and blurring segments, including alcoholic brands such as Topo Chico. “The ‘venturing’ is going to be more centralized,” he said. “So that we can look at everything that’s going on, not only at Coke but with the bottlers, and be more choiceful in the kinds of things that we want to invest in as a system.”

CATEGORY FOCUS. Smith said carbonated soft drinks, water and coffee will continue to be global growth drivers, in large part due to their scale, even if the growth rates aren’t as high as categories such as energy. “People will continue to drink beverages with bubbles in them,” Smith said, “so it’s a matter of figuring out how we pivot and morph and change and innovate within that space.” He called coffee a “huge opportunity in front of us,” which will be driven by the Costa Coffee acquisition. Water will remain important, and the company will have to figure out how to play in such a fragmented category more profitably, he said. As for tea, Smith said outside of the more commoditized black tea segment, other more premium forms and “infusions” will be a “big growth market.”

COSTA COFFEE. While Coke’s early 2019 acquisition of UK coffee chain Costa has hit a sizeable roadblock amid pandemic-induced shutdowns, Smith was not discouraged. “We didn’t buy it to be in foodservice,” he said. “We bought the brand Costa because that’s our entry to have critical mass in the coffee space.” He added: “We intend to play in a much more multi-platform way in the coffee space.” That includes now being able to work with bottlers to provide both ready-to-drink coffee and food service offerings outside of just cafes.

Plus, Are Pepsi Drops on the Horizon?

In an interview, PepsiCo Beyond the Bottle EVP and Chief Sustainability Officer Jim Andrew discussed the company’s efforts to eliminate plastic waste by using less of the material, increasing recycling, and reinventing packaging to use new materials or replace single-use plastic packages altogether. A key step in this direction was PepsiCo’s late 2018 acquisition of SodaStream, the at-home sparkling water maker that this year reached $1 billion in annual retail sales. Andrew addressed the challenge of balancing a brand that encourages consumers to avoid packaged beverages with the fact that PepsiCo has an important and large packaged beverage business globally. “It always comes back to the consumer,” he said. “How do we give consumers choices? SodaStream is absolutely a part of that. It’s a big growth driver. It’s going to help enable the company to achieve our vision of reducing plastic and reinventing beverages.” He added: “We see it as an ‘and.’ Sometimes consumers want the convenience of a packaged beverages. Other times they are looking for the ability to make a beverage at home, free from single-use packaging. There’s really no one-size-fits-all solution to eliminating plastic waste. We think we’re going to have to do it all.” 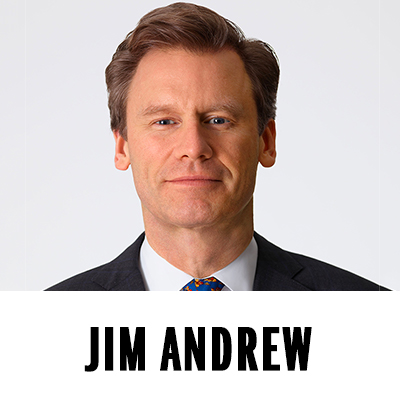 PEPSI DROPS? PepsiCo recently launched Bubly drops for the SodaStream device, capitalizing on the company’s canned sparkling water product. The introduction raises the question of whether carbonated soft drink brands including Pepsi-Cola and Mtn Dew will end up in do-it-yourself syrup form for the SodaStream appliance. Such a decision would be of particular interest to US Pepsi bottlers because they hold exclusive franchises to sell those brands in ready-to-drink formats. While Andrew said he had nothing new to share when it comes to adding branded soft drink syrups for SodaStream, he emphasized the fact that Bubly and SodaStream were the “right brands to bring together” because they already share values around sustainability, healthfulness, and fun. (In an opinion piece about the impact of digitization on the food system, published by FoodDive one week after Future Smarts, PepsiCo EVP and Chief Science Officer Rene Lammers included this line about the evolution of food delivery: “A beverage 12-pack may be replaced with concentrated flavor syrup pods for in-home beverage dispensers such as SodaStream.”)

SUSTAINABLE INNOVATION. When asked about the importance of sustainability in the context of product innovation, Andrew said PepsiCo began a program last year called “Sustainable from the Start” that puts the issue “at the heart of our new product development activities and processes.” The program evaluates the environment impact of decisions from idea to fruition.

In a presentation, Keurig Dr Pepper Chief Marketing and Concentrate Officer Andrew Springate discussed consumer behavioral changes during the pandemic and how the company adjusted its marketing strategy as a result. Public gatherings were curtailed, most people worked (and cooked) at home, shopping moved online and to large format stores for pantry loading, and consumers focused even more on wellness and prevention. That forced KDP to shift its marketing spend to messages of 1) trust, comfort, and small indulgences, 2) at-home consumption occasions, and 3) what Springate called “collective consciousness,” related to protection of the environment and social responsibility. When it comes to small indulgences, Springate highlighted the company’s focus this year on its Dr Pepper & Cream Soda innovation, which generated $176 million in year-to-date retail sales and was 71% incremental to the Dr Pepper trademark. The beverage also was the No. 1 carbonated soft drink innovation of 2020, Springate said, citing IRI data. 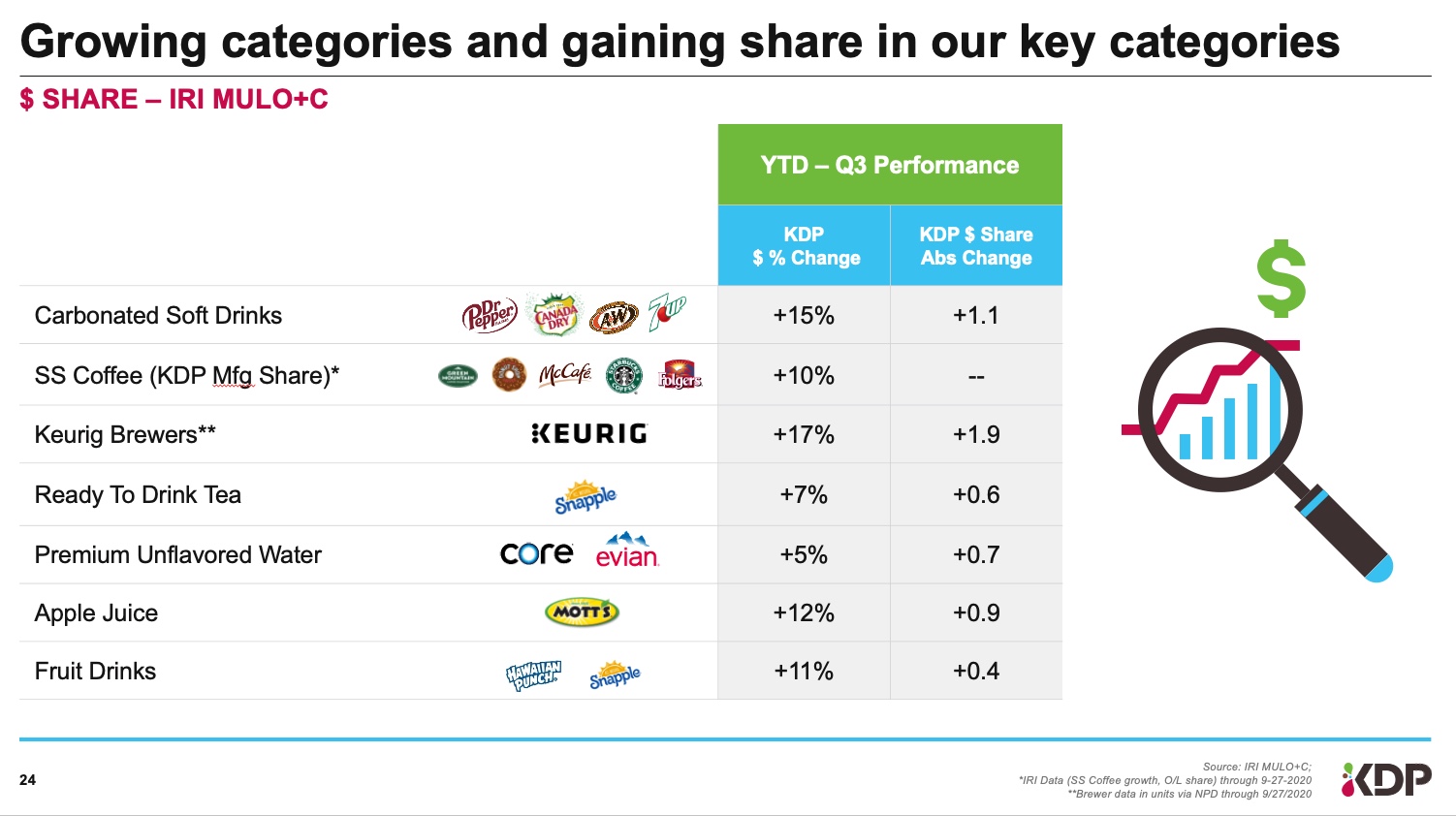 HOT COFFEE. To capitalize on the work-from-home trend, Keurig created a new occasion for its single-cup brewing system with a “1 Step Latte” innovation, which extended its Donut Shop line of K-Cup coffee pods. The product, targeting consumers who frequent coffee houses, was 50% incremental to the core line, Springate said. Meanwhile, Springate said new brewer technology has helped fuel 3 million new Keurig consumers during the pandemic, which was 1 million consumers more than in typical years. Technology for 2021 will include a brewer that allows users to further customize their coffee, as well as to start a brew remotely, which is one of the top consumer requests, Springate said. 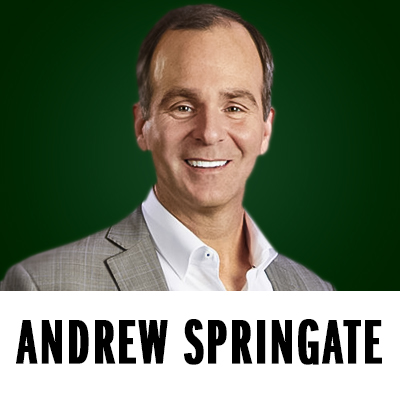 BOTTLING SYSTEM MOVES. BD asked Springate about a spate of transactions in recent years related to KDP’s franchise soft drink bottling system. The key question is whether KDP wants to move to a company-owned bottling system. “Our goal is not to control every market with our trucks,” he said. “But rather to ensure our products are in each market in which we sell our brands and that we have a competitive route to market regardless of who owns the territory.” Springate said he expects KDP’s route to market to continue to evolve, adding that the company foresees “a long partnership with our partners, as we operate today.”

ENERGY. Springate said the company sees “great value in the energy space” and will continue to look to grow Adrenaline Shoc, Xyience and Venom. “We’ll continue to evolve our portfolio on that front,” he added.

BOTTLER PROFITABILITY. Springate praised its bottling partners for 18 consecutive quarters of growth and a great 2020 on Dr Pepper. When asked about concentrate pricing to bottlers, Springate said, “We always walk a fine line,” adding, “We want to make sure we create a value equation that works for everyone and we’re going to continue to take our concentrate and continue to help drive performance with it and put pressure against the consumer and deliver value for retailers and bottlers.”