Boston Beer’s Hard Mtn Dew, distributed by PepsiCo’s Blue Cloud unit, has now expanded to Oklahoma, Arkansas, and Minnesota, according to the company. That brings the total states with availability since the brand’s February launch to six, including Florida, Tennessee, and Iowa. The product could reach stores in as many as nine more states by the end of this summer, Boston Beer now says, revising an earlier projection of May. In an April 26 interview after the company reported first-quarter earnings, PepsiCo CFO Hugh Johnston told BD that new markets will open as soon as state-level permissions for alcohol distribution are secured. “It’s not an operational challenge, it’s an approval challenge,” he said. “It’s hard to speculate on regulator timing. We’ll go as soon as we get the approvals.” Blue Cloud Distribution has secured federal excise tax permits in at least 18 states and state business licenses in at least 25 states, according to BD data. The company is actively hiring for alcohol sales representatives in South Carolina and Virginia as well, BD has learned.

‘HIGHEST TRIAL I’VE EVER SEEN.’ Hard Mtn Dew reached a peak market share of almost 15% at retail across Florida, Tennessee, and Iowa for the week ending March 13, according to IRI data cited by Consumer Edge Research. That share of the flavored malt beverage category has since fluctuated at about 12% to 13%, according to Consumer Edge. The brand reached a 2 share nationally as of April 17. Peak market share in Iowa hit 34%. Separately, during a first-quarter conference call for investors, Boston Beer President and CEO Dave Burwick (a former PepsiCo beverage executive) said the brand had reached a 27 share in the three launch states. Burwick added that sales turn was seven or eight times that of the next largest FMB in those states. “I’ll say this with confidence. It’s the highest trial I’ve ever seen -- ever, ever -- and with anything that I’ve ever been involved in personally,” Burwick said. “Now, repeat is obviously the key part of it.” PepsiCo executives have been equally grounded about the need to see strong repeat rates before claiming victory. “We’re weeks into this and it’s three states,” PepsiCo’s Johnston told BD. “So, I’m not ready to put anyone in Canton yet.” PepsiCo Chairman and CEO Ramon Laguarta, who visited an Oklahoma launch market this month (pictured above), had this to say during the company’s call earnings call for investors: “As always in these circumstances, we have to wait and see repeats and see really where the business stabilizes.” When BD asked Johnston about expanding Blue Cloud’s product offering, he said, “We’re not opposed to it, but no plans at this point.” He added: “Right now it’s, let’s run this test, let’s see if it has legs, and then we’ll see where it goes from there.” Answering questions by analysts, Laguarta said, “Yes, we’re going to continue to try to create new exciting products that would go through this platform in the future. And as we learn more about the consumer together with our partners, we’ll be able to innovate meaningfully in this category. But as I said, too early yet to call it a huge success.” Meanwhile, according to an April 27 research note by JP Morgan, PepsiCo executives told beverage analyst Andrea Teixeira that alcoholic beverages could be meaningful to the company within three to four years when it comes to margin accretion and synergies. 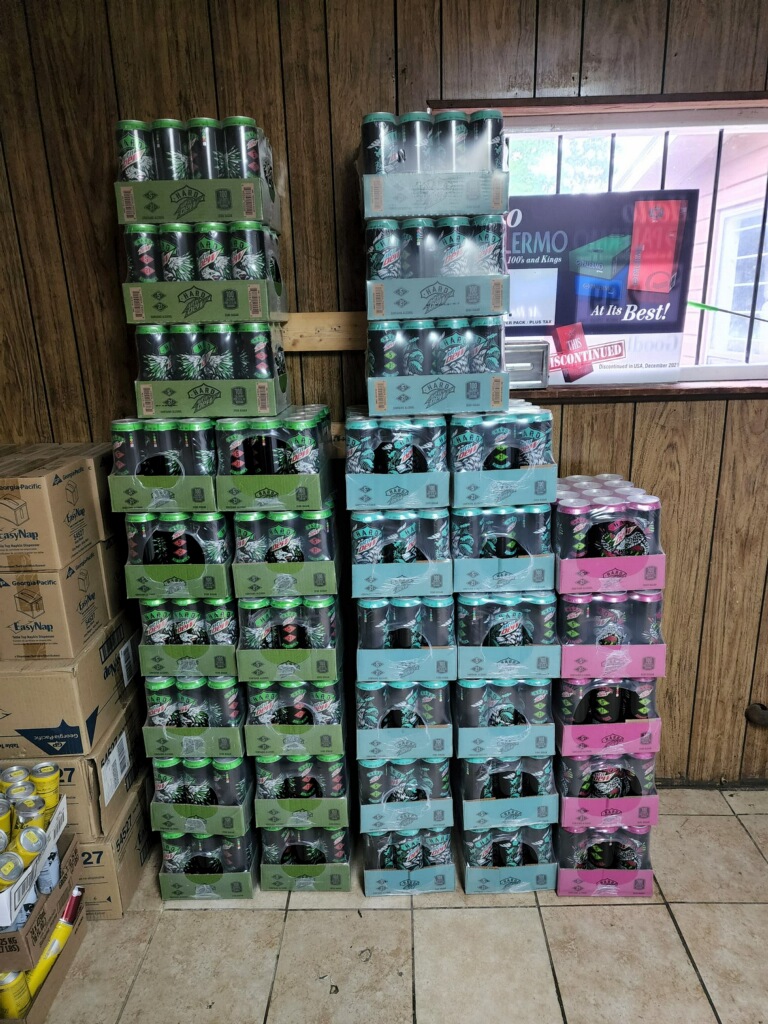 STOCKING UP. Citing data from Numerator, RBC Capital Markets Beverage Analyst Nik Modi said more than 50% of Hard Mtn Dew purchasers bought on impulse, “which supports the strong levels of trial we have seen in the early weeks of the launch,” he added. In addition, 70% of those purchasers said they would buy the product again. Separately, BD has observed that the relative scarcity of retail outlets carrying Hard Mtn Dew and the limited national footprint may have stoked trial as consumers stocked up when they did find the product or crossed state lines to buy. For example, one independent convenience store owner in Chattanooga, TN told BD that he was unable to get product early in the launch. He is now able to order inventory as Blue Cloud expands its reach from national and regional chains to independent c-stores and liquor outlets. The store owner told BD that he is stocking up on product in case of shortages this summer. In addition, he suspects some of his customers are from out of state. A Kentucky man, for example, purchased four 12-packs to take back home, the store owner said. While anecdotal only, BD has heard numerous reports of consumers in bordering states traveling to launch states to buy Hard Mtn Dew. The store owner also said that his Blue Cloud rep, who sells only Hard Mtn Dew and delivers product with a rented Penske truck, has been building a list of new customers based on referrals and the persistence of some store owners. In an April 20 research report, Goldman Sachs Beverage Analyst Bonnie Herzog said her quarterly survey of convenience store operators found retailers “split” on Hard Mtn Dew, with some citing strong performance and others delaying launch dates because they can’t secure inventory. “Several noted the route-to- market has been bumpy,” she wrote, adding later that some noted PepsiCo’s decision to distribute the brand itself rather than leverage Boston Beer’s distribution network.