Juice-Infused Brand May Add as Many as 50 Distributors This Year, CEO Says

Spindrift is targeting 20 new states by the end of this year for its Spindrift Spiked sparkling water as the company forges a new direct store delivery (DSD) network. In an interview, Founder and CEO Bill Creelman said those target markets also will have access
to a new 16-oz single-serve can for Spindrift’s flagship non-alcoholic sparkling water. To differentiate itself from other sparkling water and hard seltzer brands, Spindrift uses real juice in its products while emphasizing a transparent ingredient label (no “natural flavors”) and the absence of artificial ingredients. Spindrift has spent the past 12 years since its founding building a retail network of 50,000 warehouse-delivered outlets for its flagship juice- infused sparkling water. Retailers include Target, Publix, Safeway, Kroger, Market Basket,
and Whole Foods. Creelman said his team now is looking to recruit as many as 50 DSD distributors within the 20 target markets to handle both the alcohol product and the new 16-ounce sparkling water package. Those distributors will help Spindrift focus on boosting all-commodity volume (ACV) penetration while breaking into the convenience channel, he said. “The secret to our success was not speed,” Creelman said of his flagship non-alcoholic product. “It was about deliberate partnership with retailers that were looking to tell the premium story. We are taking that exact approach to hard sparkling water.” The DSD expansion comes after successful tests last year in Massachusetts (Boston), Rhode Island, and California (San Diego, Los Angeles). “We are in full rollout mode now,” Creelman said. Spindrift added markets in Maine and New Hampshire earlier this year. New York is underway and Florida is imminent, he said. While emphasis will be placed on the rest of California, Pacific Northwest, and the East Coast, where Spindrift sparkling water is already strong, Creelman sees opportunity as well in some heartland markets. “The challenge here is that we want to be purposeful, and we want the right partners to help us,” Creelman said. “So inevitably there are going to be instances where people want the brand, but we can’t find the fit.” Spindrift will tap distributors from the AB InBev and Molson Coors beer networks, as well as use independent distributors, he said, adding, “There is no single solution. Great distributors know how to execute and focus.”

PRICING. Spindrift’s core sparkling water at grocery retail sells in 8-packs for $6.49 to $6.99. The new 16-oz single-serve can retails for $1.99 to $2.49. Spindrift offers its spiked product in 12-packs for between $19.99 and $22.99. Creelman said the brand’s premium ingredient profile and fruity colors, driven by the use of real juice, is a critical differentiator in hard seltzer and sparkling water categories that are dominated by similarly priced clear liquids that taste largely the same. “There is a lot of switching behavior that goes on in these categories,” he said. “So, we want to get into that rotation and be one of the brands that people trade into.” One looming potential impediment to that strategy is rising inflation, which has some wondering whether consumers will soon pull back on beverage spending as retail pricing across categories rises ever higher. Spindrift has increased pricing this year by +6.0% to +8.0% to help offset higher input and freight costs, Creelman said.

PERFORMANCE. Dollar sales at retail for Spindrift’s flagship non-alcoholic sparkling water jumped +41% in the first quarter of this year as the brand grew to a 2.9 category share. That followed more than +50% growth in 2021. For comparison, Polar (distributed by Keurig Dr Pepper) ended the first quarter of 2022 with a 6.7 share after dollar sales grew +15%, and Coca-Cola’s Topo Chico held a 5.3 share after dollar sales declined -6.4%. 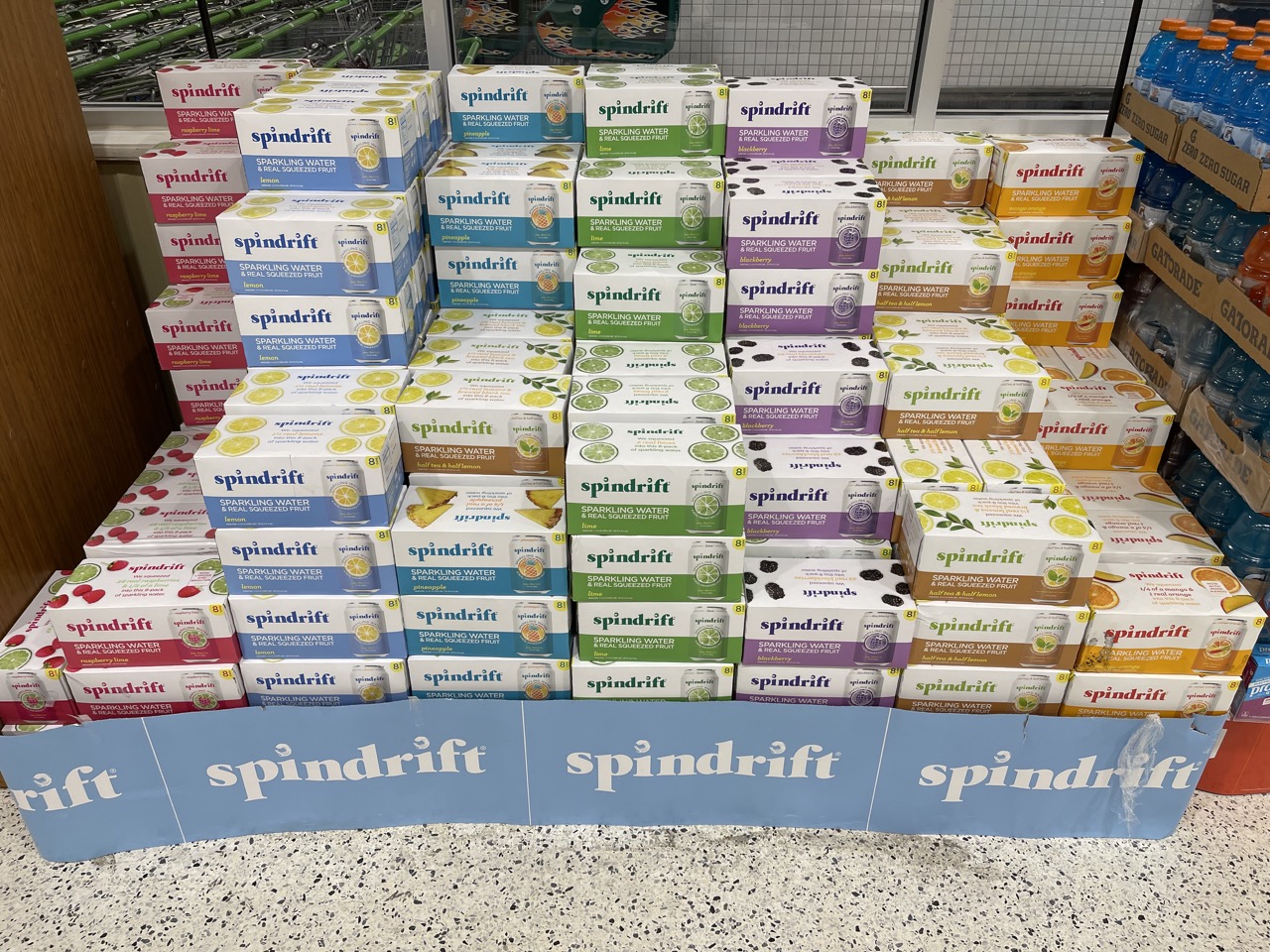 ASPIRATION. Creelman said the company is on track to generate revenue in the range of $250 million this year. With the DSD expansion, Spindrift’s goal is to double that annual revenue to $500 million by 2025, he said. “The same people that were excited about finding the brand in the center of the store are now excited about grabbing the brand on the perimeter of the store in the grab and go cases, as well as in independent markets and liquor markets,” he said.