DIET COKE XTRA TRADEMARK FILED. Coca-Cola has filed a trademark application in the US for Diet Coke Xtra, which was launched in Canada in January in a Toasted Vanilla flavor. The Canadian drink, packaged in the same slim cans used for Diet Coke’s flavors line, includes 59 mg of caffeine, which Coke says is 50% more than for a regular cola. That’s also about half the caffeine of a standard energy drink. Diet Coke Xtra “provides the perfect refreshment for an afternoon pick-me-up or whenever you require a lift,” the product’s website says. 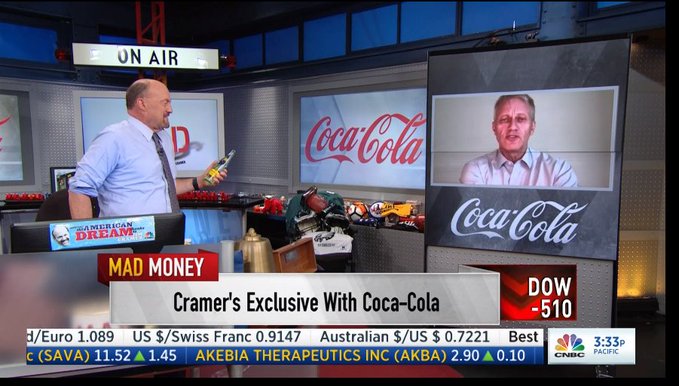 COKE ZERO SUGAR INNOVATION TEASED. During an appearance on CNBC’s Mad Money, Coke Chairman and CEO James Quincey told host Jim Cramer to look out for innovation in the pipeline from Coca-Cola Zero Sugar. “I can’t tell you exactly what they are today but put yourself a placeholder down that we’ll be talking about Coke Zero in the months to come, getting into next year,” he said. “We’re definitely going to be betting on Coke Zero Sugar. It’s got momentum, consumers love it.” Quincey said Coke Zero Sugar has done “much better proportionately” compared to the rest of Coke’s brands and that he is “convinced it will be back to robust growth next year.”  HARD SELTZER.  In the same interview, Quincey added timing details for the upcoming launch of Topo Chico Hard Seltzer (BD 7/30/20). The product will debut in Mexico and Brazil later this month (Sept. 28, Coke has confirmed), and could hit the US as early as the first half of 2021, Quincey said.

SUSTAINABILITY. A new report by the Changing Markets Foundation, which campaigns for sustainability-related solutions, concluded that Coca-Cola, PepsiCo and Nestle Waters North America are among beverage companies that have missed voluntary targets related to plastic recycling. In a statement, Coca-Cola said the miss “was an opportunity to learn” and that the company is confident about its current World Without Waste goals “despite them being more ambitious than our previous targets.” Nestlé Waters North America said its 2008 goal was meant to “catalyze collective action in and around the industry and that the anticipated “groundswell of support, unfortunately, never materialized.” The company added that its current commitments focus on “dramatically” increasing the company’s use of recycled content in its US beverage portfolio. PepsiCo didn’t respond to a request for comment.

RETAILERS. Papa Johns said it will create a global headquarters in Atlanta, moving the CEO and most existing corporate operations out of Louisville; the pizza delivery chain’s beverage operations are serviced by PepsiCo (Coca-Cola is based in Atlanta) … The Sizzler steak chain, which serves Pepsi products and Dr Pepper, has filed for Chapter 11 bankruptcy protection as it looks to renegotiate leases at 14 corporate-owned stores following a collapse in business amid the COVID-19 pandemic, according to Nation’s Restaurant News; the chain also has 90 franchise locations.

LAUNCHES, EXPANSIONS. PepsiCo’s Bubly sparkling water brand will introduce a limitedtime Passionfruit flavor online at Amazon, Walmart and Boxed.com starting Oct. 1 … PepsiCo and Red Lobster have collaborated on a Dew Garita cocktail made with Mtn. Dew soda … Coca-Cola owned Core Power has add a strawberry flavor to its line of ready-to-drink protein shakes … Sipp has launched a line of organic seltzers with antioxidants from camu camu superfruit, caffeine from green coffee, and sugar from agave nectar … Perrier has collaborated with famed Japanese artist Takashi Murakami, whose art will appear on Perrier packages next year … A Canadian company called Rritual (not a typo) has launched a line of mushroom adaptogen products that include a canned “calm energy” shot … Coca-Cola’s Fairlife dairy unit has introduced a Strawberry flavor to its line of Core Power Elite protein shakes.

INTERNATIONAL. In Singapore, 7-Eleven and Coca-Cola have partnered to launch a store that combines a Coke-themed vending lounge with a 7-Eleven retail operation.

QUICK TAKES. PepsiCo has set a new target to source 100% renewable electricity across its owned and controlled global operations by 2030 … Mtn Dew has signed a global marketing partnership with the mobile video game PlayerUnknown’s BattleGround Mobile … NFL football star DeAndre Hopkins of the Arizona Cardinals has signed a multi-year sponsorship deal with Canopy Growth-backed sports drink company BioSteel (BD 4/14/20) that includes an investment, CNBC reported … The former home of Dr Pepper founder Wade Morrison in Waco, Texas has been listed for $1.4 million, according to the Houston Chronicle … Budweiser has offered to stock with free beer a condo whose walls are covered with Bud beer cans -- as long as the new owner leaves the walls intact.