Among US non-alcoholic beverage categories, traditional carbonated soft drinks absorbed the greatest impact last year from pandemic-related restaurant and event lockdowns that drastically reduced volume from fountain beverage and foodservice retailers. As shown in Table 1, the CSD category, declined -4.7% by volume while dollars fell -7.4% (BD no longer includes energy drinks in the CSD category). As shown in Table 2, Coca- Cola drove much of the CSD category decline. The company’s brands, which accounted for roughly 70% of fountain soft drink sales in 2019, were disproportionately impacted in 2020 as restaurants and event venues shut down or drastically reduced operations for much of last year. CSDs lost volume and value share of liquid refreshment beverages (LRB) as consumers shifted consumption to categories such as sports drinks, bottled waters, and ready-to-drink teas. Energy drinks performed well despite disruption in the category’s all-important convenience and gas channel. All told, the US LRB market declined -0.8% by volume (compared to +0.8% in 2019) and -3.6% by value (compared to +3.8% in 2019). That followed the curtailing of entertainment-related consumption and after consumers leaned away from premium products while stocking up on staple beverages. 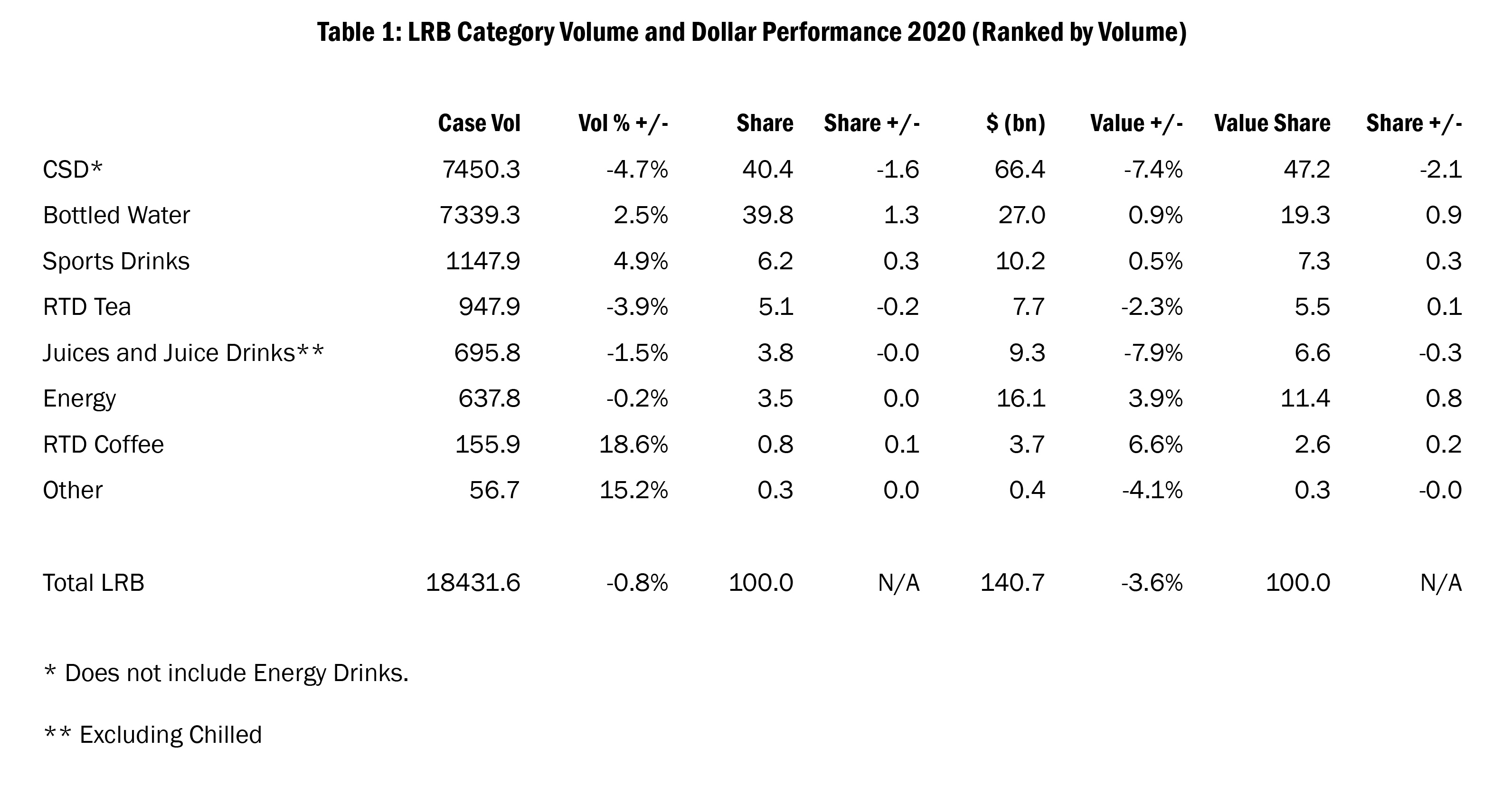 ABOUT THIS REPORT. Annually, BD publishes estimated volume and value sales data for the US liquid refreshment beverages (LRB) market, as well as categories including carbonated soft drinks (CSD), and energy drinks. The data included in this special issue estimates beverage consumption for all measured and unmeasured channels, including packaged retail, fountain, and vending. This report focuses on single-serve, direct-store- delivered (DSD) beverages and the data generally do not include products that are warehouse delivered or require a refrigerated supply chain. BD no longer includes energy drinks within the CSD category for the purposes of this report and the annual Fact Book (available for purchase HERE). Energy drinks are now listed as a distinct category. The fountain channel includes everything from restaurants, such as McDonald’s and Taco Bell, to sports venues.

TOP-10 CSD BRANDS MOSTLY DECLINE. As shown in Table 2, all but one carbonated soft drink brand in the Top-10 (by volume) posted volume declines, and all posted a decline in value. This was driven in large part by 1) dramatic declines in the fountain and foodservice channel, which drives meaningful volume and profit for major soft drink brands, and 2) declines in higher revenue-per-ounce immediate consumption packages such as 20-oz PET bottles that were most pronounced early in the pandemic as workplaces closed and commuters stayed home, reducing trips to convenience stores. The only CSD brand that grew volume was Coca-Cola Zero Sugar (+5.0%). The no-calorie soda already was growing more than most CSDs prior to the pandemic. And Coca-Cola Zero Sugar became an even greater mainstay on grocery shelves as Coca-Cola focused on core products amid aluminum can shortages and other disruptions. Diet Coke, meanwhile, posted a -7.0% volume decline. Flagship brands Pepsi-Cola (-2.0%) and Dr Pepper (-3.1%) each declined less than Coca-Cola (-4.0%) by volume, while Coca-Cola’s value decline remained in line with the two competitor brands. A pullback by Coca-Cola on brand Fanta to focus on core brands contributed to a -25% volume decline. 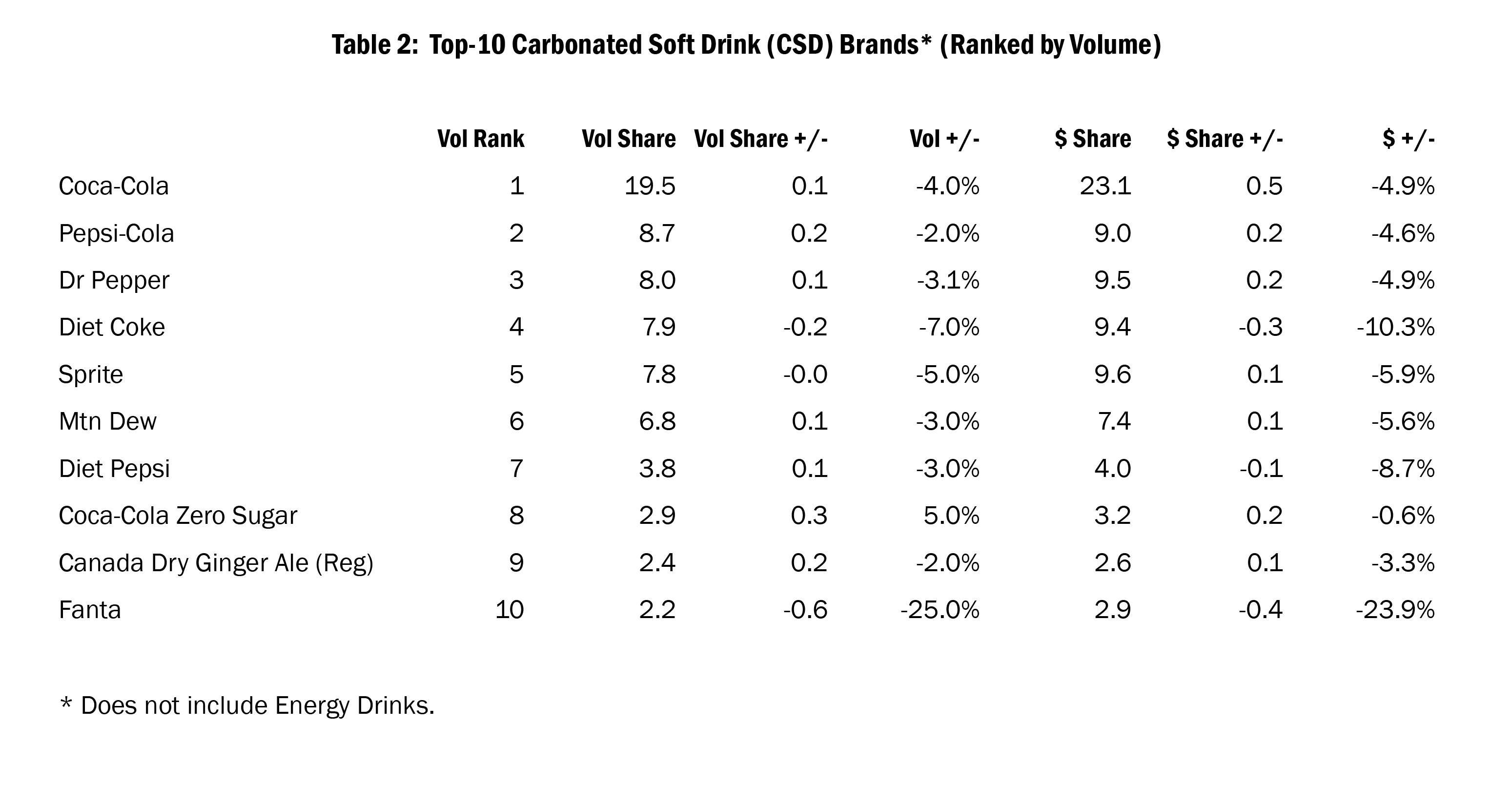 GATORADE DOMINATES TOP-10 LRB TRADEMARK GROWTH. Carbonated soft drinks and bottled waters dominate the largest LRB trademarks when ranked by volume. As shown in Table 3, trademark Gatorade posted the most significant volume (+7.2%) and value (+ 6.5%) gains last year among trademarks in the Top-10. Gatorade benefitted from consumer demand for products with perceived health and wellness benefits amid the uncertainty of the global health crisis. Meanwhile, bottled water brand Dasani suffered the largest decline among the Top-10 trademarks, with volume falling -8.5% and value dropping almost -21%. And trademark Dr Pepper was the only carbonated soft drink on the list to grow volume.

METHODOLOGY. BD’s all-channel data may differ from the companies’ data and is based on the publication’s evaluation, analysis and estimates of available information both publicly and from confidential sources. For reference, click HERE for our 2019 Beverage Value and Volume Analysis.