PepsiCo’s announcement that it was selling a controlling stake in Tropicana to Paris- based private equity firm PAI Partners came as a surprise to even close industry observers. PepsiCo and PAI will form a global JV, with PepsiCo retaining a 39% minority stake. The JV includes Naked (acquired in 2007), Kevita (acquired in 2016), Izze (acquired in 2007), and Frutly (launched this year) in North America. PepsiCo acquired Tropicana in 1999. The $3.3 billion deal is expected to close late this year or in early 2022. PAI is the same firm that helped acquire private label beverage producer and contract packer Refresco in 2018. The same day as the Tropicana deal, Coke announced it was selling to Refresco several hot-fill beverage production plants in the US that make some shelf-stable Minute Maid products.

CHILLED DSD CARVE OUT. Embedded in the deal is a licensed carve out for single-serve refrigerated Tropicana, Naked, and Kevita products distributed to convenience stores and foodservice accounts by way of PepsiCo’s “chilled” direct-store-delivery system in North America. According to BD sources, this chilled DSD system employs modular refrigeration units, much like small refrigerators, that are retrofitted inside ambient trucks that carry shelf stable products such as soft drinks. This allows a single truck to deliver both shelf stable and refrigerated products. The refrigeration units are subject to strict quality control to survive a hot summer day in Houston, for example. This method, which also is used by some independent Pepsi bottlers where the economics make sense, allows PepsiCo to leverage its national system of more than 350 distribution centers and associated delivery routes. Products moving through the system include mostly single-serve 100% orange juice in mini- carafe bottles, single-serve Naked juice smoothies, and single-serve Kevita kombuchas. The rest of the chilled juice portfolio is distributed to retailer warehouses or by way of third-party distributors (this includes refrigerated Starbucks and Lipton Pure Leaf tea products, which are marketed in only multi-serve packages.) When it comes to the chilled North American Tropicana, Naked, and Kevita business combined, a source roughly estimated that almost a third passes through the convenience retail and foodservice channels. Of that, about half passes through PepsiCo’s chilled DSD system and half moves through third-party chilled distribution partners. PepsiCo chilled system grew from the 2007 acquisition of Naked, which had its own chilled distribution system. Starting in 2012, PepsiCo began testing the addition of refrigerated units onto ambient trucks. The company began expanding the system in earnest in 2017. Lately, PepsiCo has partnered with Chobani to test a refrigerated yogurt drink using PepsiCo’s chilled DSD system in metropolitan Boston. 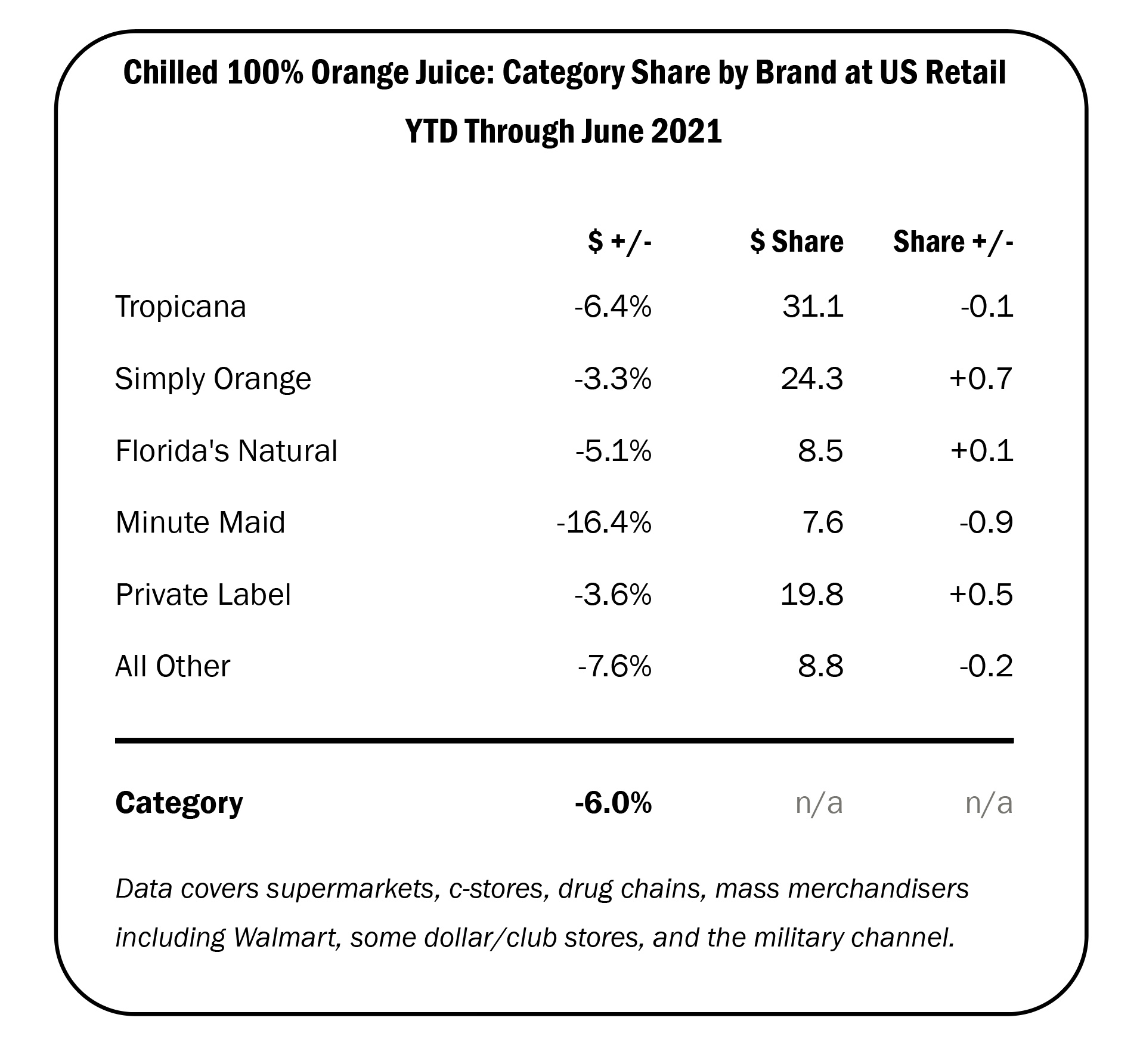 INTERNATIONAL. If approved by European competition regulators, the new JV will include Tropicana, Naked, Punica, and Copella. Brands such as J7 in Russia and Ceres in Africa won’t be included in the new JV. In North America, the JV will grant PepsiCo perpetual licenses for the portion of the juice distribution the company will retain.

DEAL RATIONALE. The deal provides a shot of cash to PepsiCo that can be invested into high growth areas, including coffee and protein drinks on the beverage side. PepsiCo said operating profit margins for the juice business were below the company’s overall operating margin. PAI will be able to focus more precisely on the juice business at a time when consumers have returned to the category for immunity benefits amid pandemic health concern.

ANALYSTS’ REACTION. Wall Street analysts were generally positive about PepsiCo’s decision to unwind its juice business ownership. An Aug. 3 research note from JP Morgan’s Andrea Teixeira reflected sentiments shared in analyst notes reviewed by BD. She said the deal “will enhance the overall growth and margin profile” for PepsiCo given that the juice business pre-pandemic provided little if any growth and had volatile commodity exposure coupled with high private label competition. Teixeira said the deal demonstrates a “growth mindset” by CEO Ramon Laguarta and PepsiCo’s board outside of acquisitions, as well as “the discipline to dispose assets that do not meet the growth/margin criteria set by PepsiCo’s long-term strategic plan.” PepsiCo pointed out in an announcement that the juice business generated operating profit margins that were below PepsiCo’s overall margin in 2020.