And More Flack Over Possible Confusion Between Hard and Soft Sodas.

G&J Pepsi-Cola Bottlers, PepsiCo’s largest fully independent US franchise bottler, is preparing to distribute Hard Mtn Dew on the same “blue trucks” that distribute Pepsi-Cola and other non-alcoholic brands. In an interview at BD’s Future Smarts conference in New York on Dec. 5, G&J CEO Tim Trant said the Cincinnati-based company has applied for beer distribution licenses in Ohio and Kentucky. Hard Mtn Dew is produced and marketed by Boston Beer under a brand license from PepsiCo, which founded Blue Cloud Distribution as a standalone subsidiary in 2021 to be the primary US distributor of the product. Blue Cloud already distributes Hard Mtn Dew in Ohio. In the US, PepsiCo has taken a different approach to alcohol than has Coca-Cola, which has licensed brands including Coke, Fresca, Topo Chico, and Simply to brewers and distillers who will extend them to alcoholic beverage products and hand them off to their alcohol distribution networks rather than to Coke bottlers. PepsiCo, on the other hand, has said that its independent franchise bottlers might get involved in distribution of Hard Mtn Dew as it builds out a portfolio of alcoholic beverages. Trant said G&J also intends to carry Lipton Hard Iced Tea, which will be released next year by brewer FIFCO USA under a license from the Pepsi Lipton Partnership. “If we have it on a blue truck we can get it into more channels immediately,” he said of the alcohol extensions.

PERSPECTIVE. PepsiCo has always said it planned to distribute Hard Mtn Dew with a
mix of independent franchise bottlers, local beer distributors, and Blue Cloud operations. Independent Pepsi franchise bottler Bernick’s, which operates in Minnesota and Wisconsin, also owns a beer distributorship that already handles Hard Mtn Dew, according to BD sources. To date, PepsiCo hasn’t put Hard Mtn Dew on its company-owned Pepsi bottling trucks and has announced no plans to do so, focusing instead on Blue Cloud.

COCA-COLA, KDP EXECUTIVES BULLISH ON ALCOHOL SECTOR. Alcoholic beverages were a major theme at BD’s Future Smarts conference. In on-stage interviews, Coca-Cola and Keurig Dr Pepper executives left no doubt that they see alcoholic beverages as a viable path to growth. Coca-Cola’s incoming President of International Development Henrique Braun said the company’s global plans for a new Jack & Coke canned cocktail is “a big deal” after 136 years focusing mostly on the non-alcoholic beverage sector. “We’re getting into new territory. We’re following the consumer, as we have always done, globally,” he said. “So, it’s still early days. The more we evolve, the more we learn, and the more we’re going to have clarity on what’s the next evolution building that.” BD also asked KDP Commercial President Andrew Archambault about plans to go deeper into alcoholic beverages. “It fits the mission,” he said of the sector. “There’s no immediate plans for us to do that, yet it’s an interesting space.” He pointed out that KDP is already experimenting with the sector in Canada, through partnerships for products including Snapple Spiked. “Our approach is we’re going to learn a lot,” he said. “If we see an opportunity that makes sense, we would certainly venture in.” He added: “Whether it’s a licensing opportunity for our brands or working with a partner – and they’re all equal to us in terms of valuation – they will be prioritized in terms of acting on it in a disciplined process.”

CONGRESSIONAL CONCERN. Meanwhile, in early October, BD reported on concerns by the National Beer Wholesalers Association about PepsiCo’s alcohol beverage model and how Hard Mtn Dew is marketed. PepsiCo’s Blue Cloud offered a rebuttal. BD’s reporting on both is HERE. It turns out that two members of Congress at that time repeated the concerns to a federal alcohol regulator. On Oct. 12, Congresswomen Linda Sanchez (D- California) and Ann McLane Kuster (D-New Hampshire) wrote a letter to Alcohol and Tobacco Tax and Trade Bureau (TTB) Administrator Mary G. Ryan asking the agency what it was doing to prevent slotting fee end-arounds, incentives, and cross promotions for alcoholic products that are based on non-alcoholic soft drinks. Such practices, common and legal on the soft drink aisle, are prohibited in the alcoholic beverage market. “For years, large soft drink producers have paid retailers millions of dollars annually to secure shelf space for their soft drink brands,” the congresswomen wrote. “However, should large soft drink companies be allowed to sell their alcoholic and nonalcoholic products in the same store, we would like to obtain a clear understanding how TTB plans to manage this complex regulatory situation.” There has been no indication of a response from TTB so far. 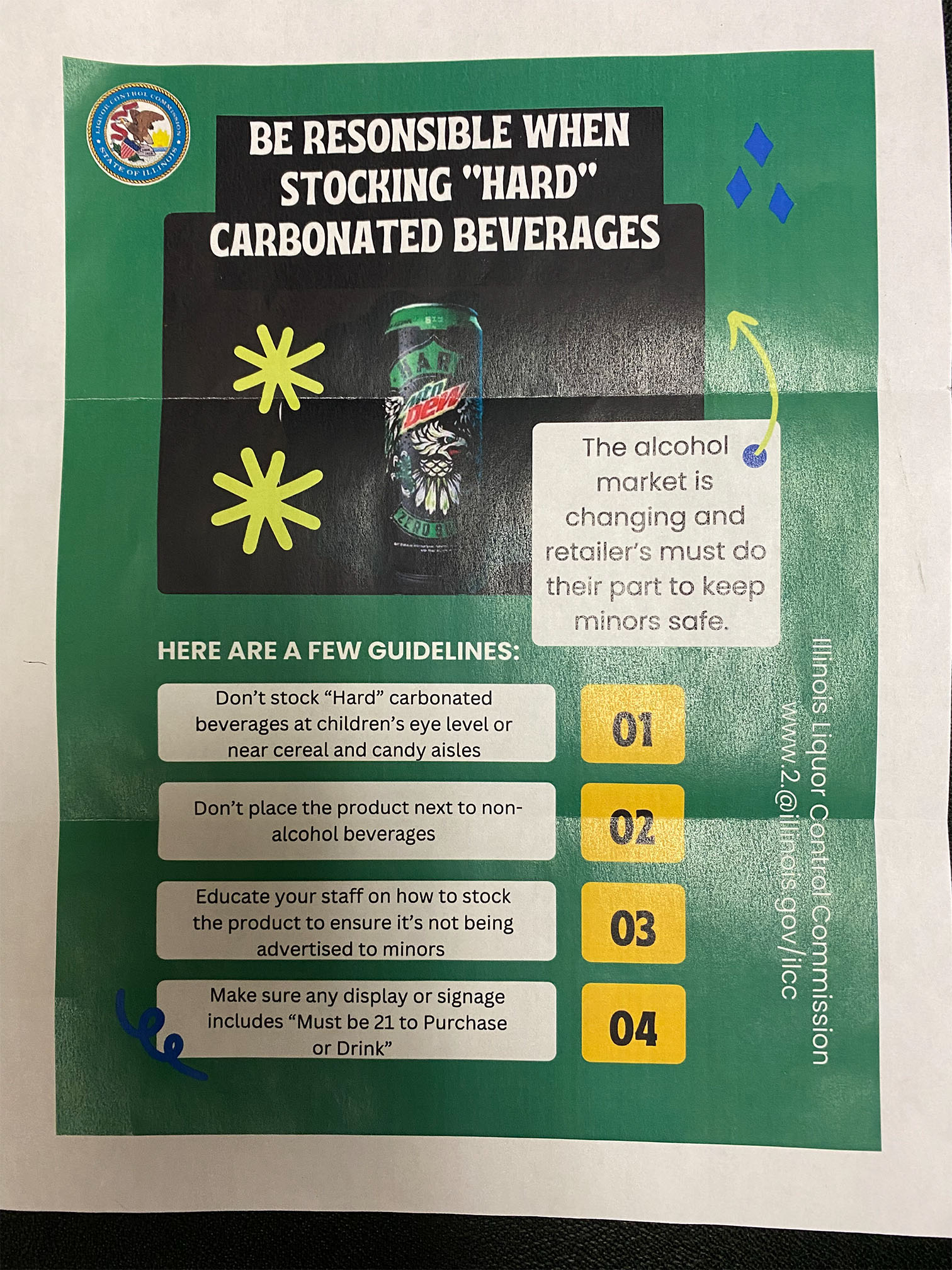 ILLINOIS TELLS RETAILERS TO ‘BE RESPONSIBLE.’

Separately, the Illinois Liquor Control Commission sent a notice (pictured) to alcohol retailers in the state urging them to “be responsible when stocking ‘hard’ carbonated beverages.” BD obtained the flyer from a liquor store owner south of Chicago. The document includes an image of Hard Mtn Dew. “The alcohol market is changing, and retailer’s must do their part to keep minors safe,” the flyer stated. The commission offered four guidelines for retailers: 1) keep the products out of children’s eye level and away from cereal and candy aisles, 2) keep the product away from non-alcoholic drinks, 3) educate staff on stocking the products to be sure it’s not advertised to minors, and 4) make sure display signage says, “Must be 21 to Purchase or Drink.”

BLUE CLOUD RESPONSE. “Unfortunately, there is a great deal of misinformation being shared within the industry about our business model and practices,” Blue Cloud Distribution GM Emiliano Di Vincenzo said in an email response when asked by BD about the expressed regulatory concerns. “The reality is we are strictly following the laws and guidelines and working hard to build this business responsibly.” When asked specifically about the congressional letter to the TTB, he reiterated to BD that the company “operates exclusively in the distribution/wholesaler category of the three-tier alcoholic beverage system in the U.S. and is committed to following all federal and state regulations.” Di Vincenzo went on to say that the company operates independently of PepsiCo and has its own employees and systems. He added that Boston Beer is the only manufacturer of Hard Mtn Dew, and that the brewer developed the product’s packaging to be “highly differentiated” from non-alcoholic versions of Mtn Dew. Di Vincenzo’s statement to BD noted that Hard Mtn Dew packaging calls out the 21+ age requirement and alcohol content “in a much more prominent way than its competitors, going above and beyond what is required by law.” In addition, “Neither BCD nor PepsiCo are paying any slotting fees or providing items of value to retailers related to the distribution of hard Mtn Dew,” he concluded.