Don’t Quit, the ready-to-drink protein drink launched last month by LA Libations and fitness guru Jake Steinfeld, is headed for 5,000 retail doors by the end of year, according to LA Libations Co-founder Danny Stepper. Fueled with a minority investment from Keurig Dr Pepper, Don’t Quit will be on the shelf in more than 3,000 locations including Albertson’s, Kroger, Safeway and Walmart by September’s end, Stepper said in an interview that included Steinfeld. The brand also is headed into CVS and Sprouts, among other retailers. One big box retailer has requested a proprietary Strawberries & Cream flavor, Stepper said (likely Walmart, BD speculates, but Stepper declined to confirm). Stepper and Steinfeld, the product’s high-energy collaborator known for his “Body By Jake” personal training brand and trademarked “Don’t Quit” slogan, say they are going after the adult nutrition category with a “clean-label replacement brand.” The $3.0 billion measured retail category is led by Ensure (Abbott Laboratories), Premier Protein (Premier Nutrition) and Boost (Nestlé). “We think it’s probably double that market size when you count health and hospital,” Stepper said. Don’t Quit touts itself as “containing no soy, no wheat, no corn, and no artificial flavors, colors or sweeteners.” Steinfeld said the brand is targeting consumers aged 50 and older looking for simple ingredients and great taste, all in a bottle that feels aspirational. “There are very few categories like this left that are primed for disruption,” Stepper said.

PRODUCT DETAILS. Don’t Quit is packed in 8-oz Tetra Pak cartons. The Original formula comes in Chocolate, Chai Tea, Orangesicle and Vanilla flavors. Each bottle has 10g of protein, up to 14g of (added) sugar, and up to 200 calories. A Max Protein line comes in Vanilla and Chocolate and contains 30g of protein, up to 150 calories, and 1g of sugar per bottle. The protein in both lines is milk-based. Pricing for Original is in line with market leaders at $8.99 for a six-pack, or about $1.50 per bottle. The Max line sells for $1 more per six-pack.

GENESIS. Stepper, who has been involved with notable brands including Bodyarmor and Core Water, said he has been developing a formula for a disruptive adult nutrition drink for more than two years. He was looking for “the right angle into the market” a year and a half ago when he met with Steinfeld at LA Libations’ El Segundo, California offices. Steinfeld, once a personal trainer to stars such as Harrison Ford, gained notoriety in the early 1980s for a 60-second “Fitness Break” segment that aired routinely on Ted Turner’s fledging Cable News Network. He would go on to build a fitness brand reaching across informercials, sports, books, and digital music playlists. All of it was built on the tagline, “Don’t Quit,” which was taken from a John Greenleaf Whittier poem of the same name that had inspired Steinfeld in his early years “as a fat kid with a stutter.” Steinfeld’s entrepreneurial activities would include profiting as a minority investor from brands such as Zico Coconut Water (which worked with LA Libations) and Tequila Avion. Now Steinfeld pitched Stepper on a sparkling water brand and a spirit. Stepper passed on both. Then Steinfeld happened to mention that he owned a trademark for the words, “Don’t Quit” and pitched the idea of a brand using that slogan. Steinfeld didn’t leap at the idea right away. He had always kept the slogan “sacred,” using it only on his books and as a sign-off for radio and TV appearances. After some thought, Stepper and Steinfeld partnered up and set out to find a major investor. 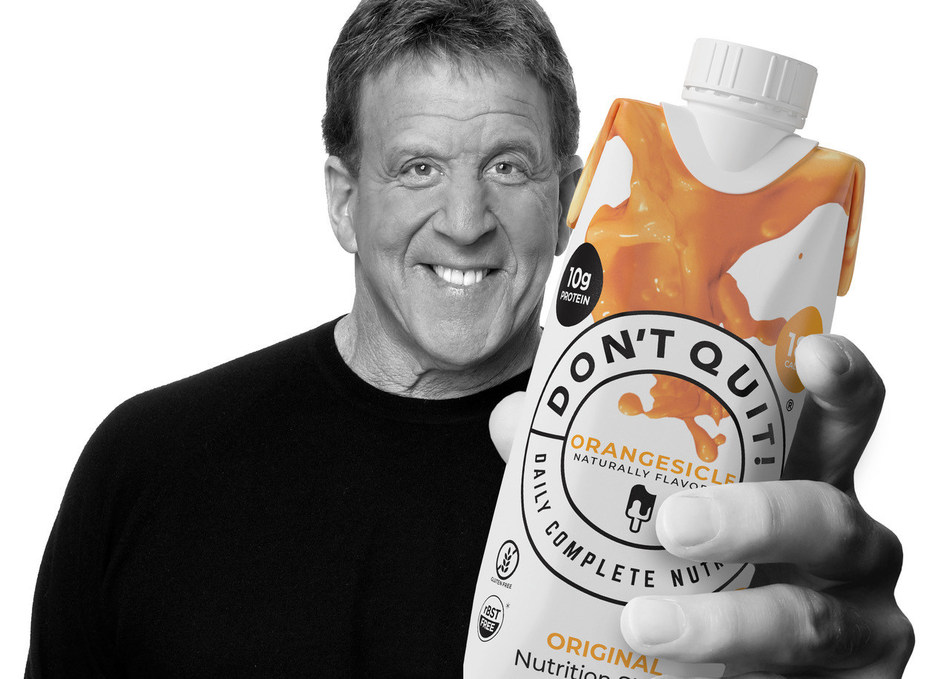 PATH TO KDP: “NEW AGE” DEAL. The pair’s first stop was Coca-Cola. At the time, Coke was the major investor in LA Libations. Steinfeld also had a relationship with Coke executives including then North America President Sandy Douglas. Coke had been a financial supporter for non-profit fitness centers that Steinfeld set up at schools, and the beverage maker sponsored Steinfeld’s annual World Series of Youth Lacrosse. Three meetings later, Coke took a pass on the Don’t Quit idea, saying it didn’t invest in pre-revenue companies, Stepper and Steinfeld said. From there, the men met with CEOs from other major beverage companies – except PepsiCo, at Steinfeld’s insistence. “I would feel bad in my stomach because I am an honorable guy and I have a great relationship with Coke,” he said. “Even though they told me ‘no,’ it doesn’t make a difference.” (PepsiCo has a plant-based protein shake called Evolve under its Cytosport unit). Among the companies interested in working with LA Libations was Keurig Dr Pepper, as word got out that Stepper’s and Coke’s relationship was coming to an end, Stepper said. CEO Bob Gamgort flew to Los Angeles to meet with Stepper and Steinfeld. “Of all the companies, he was different,” Stepper said of Gamgort. “They all wanted to do it, but he wouldn’t take no for an answer.” The deal includes a pre-negotiated exit for the brand to KDP, said Stepper, who declined to disclose any timing or terms. “It’s the new age of how these deals will get done,” he said. “It’s very opportunistic for us as entrepreneurs, but it’s also very responsible for KDP as well.” The path to ownership includes elements of time, revenue and profit, according to Stepper. Molson Coors, which is now a long-term minority investor in LA Libations, will benefit from Don’t Quit, Stepper has said. (Molson Coors and LA Libations will launch the companies’ first collaboration this month, a probiotic seltzer called Huzzah – see page 11.) Stepper also noted that Don’t Quit is a master brand that could one day include products such as cereal and apparel.

DISTRIBUTION, PRODUCTION. For now, Don’t Quit won’t be shipped on KDP trucks. That will come later, Stepper said. The product is shipped to retailer warehouses, as are competitor brands. The Don’t Quit Max line, with higher protein, will be distributed by way of direct store distribution (DSD), Stepper said, without specifying a time frame. Don’t Quit is a co-packed, low-acid aseptic product, so figuring out production capacity for the short- and long-term “was the hardest thing I’ve done,” Stepper said. “Capacity is a barrier to entry in the category, but is not a limit for us.”