CEO Says Tractor ‘Not Looking to Get into Any Battle’ With Soda Giants.

Tractor Beverage, the maker of organic, non-GMO bubbler drinks for fast-casual restaurant chains such as Chipotle, has its eye on the ready-to-drink beverage market as part of its new partnership with Keurig Dr Pepper, Tractor CEO Kevin Sherman told BD. Initial internal discussions could begin as early as this quarter, although a timetable for any RTD decision or launch has not been set, Sherman said in a recent interview. “We are definitely going to move at some point into the RTD space, but we’re going to only do it when we feel like it’s the right time,” he said. “Our partnership with KDP will play heavily in that discussion and strategy because they’re great at what they do.” Last May, Keurig Dr Pepper took a minority equity stake in Tractor, leading a $60 million funding round. The deal included a long-term, exclusive agreement to sell and distribute Tractor’s products in fountain and foodservice accounts. “The RTD market is a tough one to win at,” he said. “But with a partner like KDP, if you do it strategically, if you do it the right way, you’re going to be successful.” While an RTD beverage is on the horizon, Sherman said Tractor and KDP are focused more immediately on growth in the fountain and foodservice channel at convenience stores, colleges and universities, corporate campuses, and hospitals. “The sky’s the limit with this partnership,” he said of KDP.

BRIDGING THE DIVIDE.   Tractor was founded in 2014 by Travis Potter, an organic farmer. Sherman said Tractor’s mission has been to “democratize organic and non-GMO drinks” within foodservice. “Despite the socioeconomic divide, everyone deserves better-for-you options,” Sherman said. “Everyone deserves organic.” Tractor sells non-carbonated and carbonated drinks. Non-carbonated drinks include lemonades, punches, and teas, with flavors that branch as far as Hibiscus and Mandarin Cardamom. Calories generally range from 90 to 120 per 12-oz serving. A Green Tea offering contains no calories or sugar. Syrup is sold in a box for mixing and dispensing with a bubbler unit. Carbonated offerings include Kola Cola and Kola Cola Lite, Root Beer, Coconut, and Cucumber. They are sold by way of a bag-in-box for a traditional fountain soda dispenser. Kola Cola contains 160 calories and 39g of sugarcane sugar per 12 ounces (compared to a can of Coca-Cola at 140 calories and 39g of sugar). Kola Cola is certified organic, non-GMO, kosher certified, vegan friendly, and gluten free. Tractor’s big break came three years ago when fast-casual burrito chain Chipotle took on the brand. Tractor grew to as many as 4,000 total outlets prior to the KDP partnership, using restaurant wholesale distributors including Sodexo, Compass, and Aramark. The largest portion of that store count was made up of Chipotle locations. The company has since surpassed 6,000 locations with help from KDP, Sherman estimated. Customers include Umami Burger, True Food Kitchen, and Pokeworks. Tractor logged revenue of at least $45 million in 2022, up from about $35 million in 2021 as the pandemic grip on restaurants loosened. That was more than double 2020 revenue of about $14.5 million. In 2019, prior to signing Chipotle, revenue was just under $3 million, Sherman said. Other that KDP, investors are friends and family, he said. 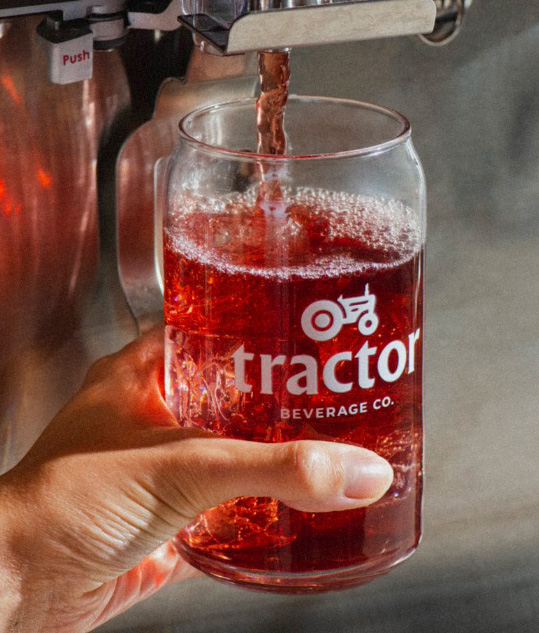 CONVENIENCE CHANNEL.   Sherman said Tractor is poised to serve a growing demand for organic and non-GMO agua fresca bubbler drinks within the convenience and gas channel. Other opportunities will come from organic fountain sodas and frozen drinks, both of which Tractor offers. “That frozen platform specifically, along with the Agua Frescas, is going to have some real legs in the c-store channel,” Sherman said, adding that talks are underway with significant potential c-store customers that he declined to name.

NOT LOOKING FOR A “BATTLE” WITH SODA.  Tractor’s website calls Kola Cola “the real, real thing,” an obvious reference to Coca-Cola. “Cola as it was meant to be enjoyed, without distractions, artificial flavors or polar bears,” the website continues. Sherman said Tractor talked to both Coca-Cola and PepsiCo prior to signing on with KDP. “You’ve got the big giants out there and we’re not looking to get into any battle with them,” he said. While Tractor’s strategy includes expanding its organic, non-GMO soda business within quick serve restaurants, the message is choice. “We’re not saying take out the soda machine,” Sherman said. “Keep the soda machine, but just put us next to it and give the consumer choice. Gen Y and Gen Z consumers are looking for more label transparency and better-for-you products. They have become label readers. So, we’re saying to operators, ‘We are just bringing incrementality, because you’re losing out to the water cup.’” He added: “When you start thinking of large QSR chains, I think that there’s a lot of opportunities still to be had there.”

COLLEGES, HOSPITALS.   Sherman said KDP will help Tractor expand into more colleges and universities as dieticians, students, and parents ask for better-for-you drink options without artificial ingredients. The company counts the University of Michigan as a key customer in the channel. “The great thing about these from just a volume perspective is some are bigger than restaurant chains because those cafeterias are open 24/7 and they want beverages there,” Sherman said. “That’s a real huge opportunity.” Hospitals are another growth area. UNC Medical Center is a customer. “Hospitals are massive campuses and they’re looking for better options, trying to get away from artificial ingredients and preservatives and things like that.”