Cannabis maker Canopy Growth has faced headwinds in the company’s home country of Canada, where the market for CBD- and THC-infused products has been sluggish. A third-quarter earnings report released today gave reason for optimism as the company narrowed losses and Canopy’s stock moved higher as a result. A particular bright spot in the quarter and a key to the company’s long-term profitability is the US market. There, Canopy reported strong distribution expansion of a CBD sparkling water called Quatreau introduced last year. The company also cited record quarterly revenue for Canopy’s sports drink challenger brand BioSteel, which may one day include a CBD infused variant. Late last year, Canopy Chief Innovation Officer Julian Cohen presented at BD’s annual Future Smarts conference, hosted online. In a separate interview, Canopy Chief Product Officer Tara Rozalowsky provided an update on the company’s US business and Quatreau’s launch.

TOTAL MOOD MANAGEMENT. During a short presentation and fireside chat at Future Smarts, Cohen said Canopy Growth views cannabis as a consumer product, just like beverages and snacks. This idea is becoming increasingly grounded by the legalization of cannabis for recreational use around the world, including in parts of the United States, he said. Canopy Growth creates consumer products around psychoactive components such as THC (tetrahydrocannabinol), found in marijuana, as well as what Cohen called “non-euphoric” components such as CBD (cannabidiol), which can come from hemp and is said to help with anxiety and other issues. (The chemical substances from cannabis that attach to receptors in the body or brain are called cannabinoids.) In Canada, Canopy produces various products using THC and CBD cannabinoids. In the US, the company is focused on CBD until permissibility for THC expands wide enough to make sense. When it comes to edible delivery platforms for cannabis ingredients, Cohen said beverages of all kinds are ideal. “If you think about it, everyone drinks,” he said of beverages in general. Cohen went on to say that the lines are blurring between five broad beverage need states: 1) hydration (water, sports drinks), 2) enjoyment (carbonated soft drinks), 3) nourishment (milk, juice), 4) escape (beer, wine, spirits), and 5) stimulate (coffee, caffeinated drinks). The crossover between these categories creates opportunity for cannabis to play in a “beneficial” beverage space in which cannabis and other functional ingredients such as vitamins, antioxidants and adaptogens are blended to “deliver on the promise of what we call total mood management” (see slide below). The idea is to help people “control their mood at any given time,” Cohen said. In the US, Canopy is exploring CBD in combination with energy drink ingredients, relaxation formulations, and sleep enhancers such as melatonin. 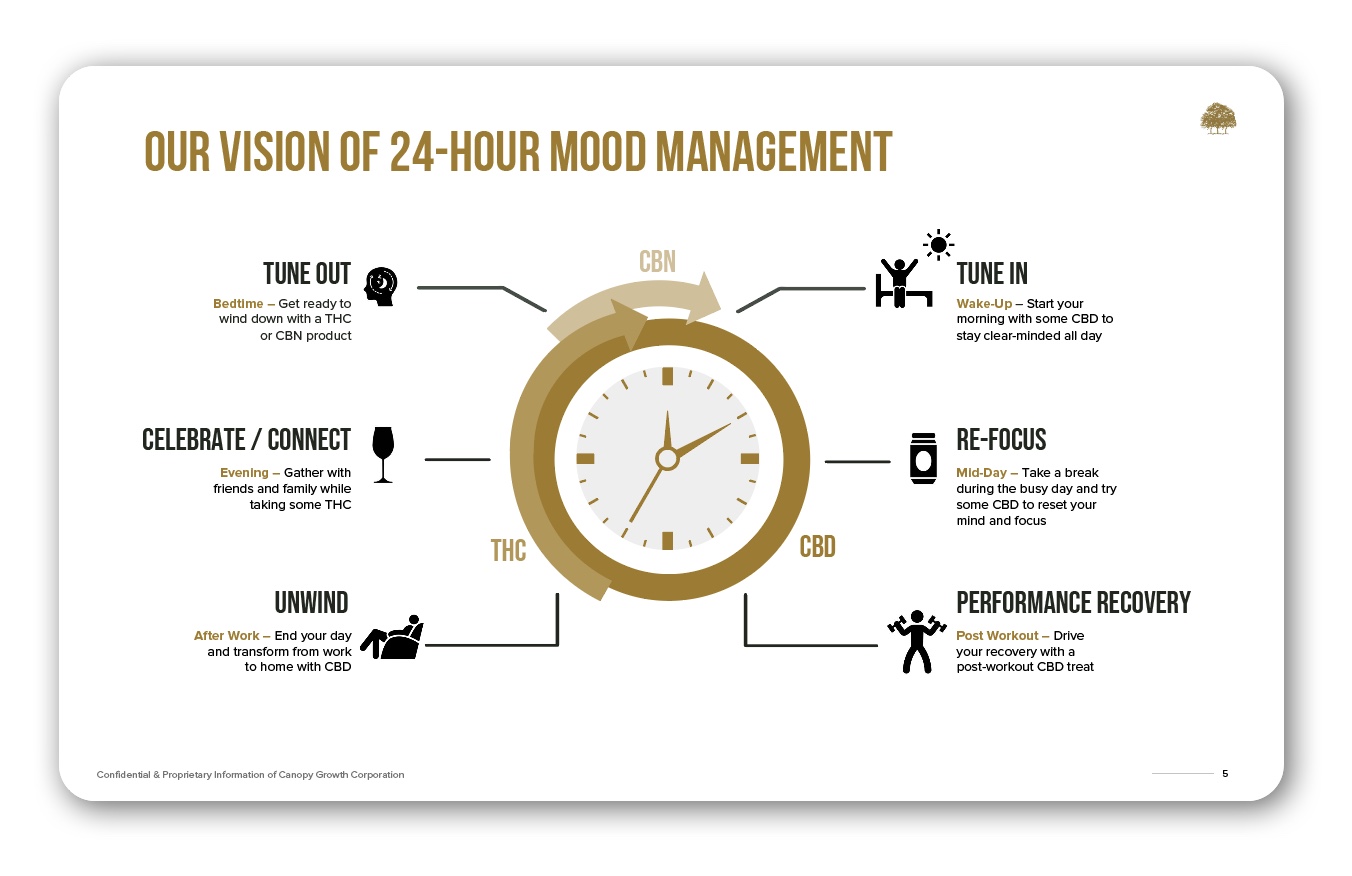 ‘HAVING TO GET A DEA LICENSE IS VERY LIMITING.’ For the US cannabis beverage market to flourish and large companies to comfortably participate, Cohen said Canopy believes federal deregulation or at least decriminalization is important. Even now, it is illegal to sell cannabis beverages over state lines, although regulators are taking a lenient approach to enforcement as long as claims are reasonable, and companies remain relatively lowkey. In essence, CBD beverage companies currently must set up manufacturing state-by-state to operate most comfortably. Deregulation also “opens up research,” Cohen said. “There’s just so much we can’t do, and we can’t test. If you think about unleashing the power of cannabis, not being able to do research because of federal restrictions, or having to get a DEA license, is very limiting.” Cohen said the regulatory landscape could loosen as early as this year. “I’m hopeful,” he said. “The wonderful thing about this is it’s truly bipartisan. This is not a political issue.” Cohen referenced the high percentage of Americans (60% in a 2021 Pew Research Center survey) who believe marijuana should be legal for medical and recreational use. “And, also, legalization means standardization, means regulation, means better product in consumers’ hands,” he said. “So, this will benefit everyone, not just selfishly from a company standpoint.”

‘CLUTTERED CBD SPACE.’ In the US last March, Canopy Growth launched Quatreau, a CBD-infused sparkling water. The drink contains 20mg of CBD per 12-oz can and is sold in four flavors – Cucumber + Mint, Passionfruit + Guava, Ginger + Lime, and Blueberry + Acai. This was the first Canopy-created product to be shifted to the US from Canada, where the company is based, according to Interim Chief Product Officer Tara Rozalowsky. By December, Quatreau was available in about 2,300 points of distribution in about 13 states using alcohol distributor Southern Glazer’s Wine and Spirits, she said. Retail channels include convenience stores, and groceries including Wegmans in the northeast US. Quatreau also is sold in on-premise in restaurants and bars. Direct-to-consumer online sales (to CBD- permissible states) account for almost 40% of sales, Rozalowsky said. The rest comes from traditional retail and on-premise. Rozalowsky said Canopy is looking to expand further by way of distributors aligned with Corona-maker Constellation Brands, which owns a minority stake in Canopy Growth. Quatreau launched into a “cluttered CBD space” in the US, where there were already more than 3,000 brands, Rozalowsky said. “Consumers are really hard pressed to even identify a brand because there’s so much clutter,” she said, adding that Canopy wants to be an anchor brand for CBD beverage consumers in the US. “Quatreau came in as this brand that can scale.” When it comes to the liquid, Quatreau has been formulated to solve for the grassy, often bitter flavor found in CBD drinks. “What we’re trying to do at Canopy is to flip the expectation when it comes to a CBD drink,” she said. “We don’t want to have the consumer sacrifice for the health and wellness benefit.” 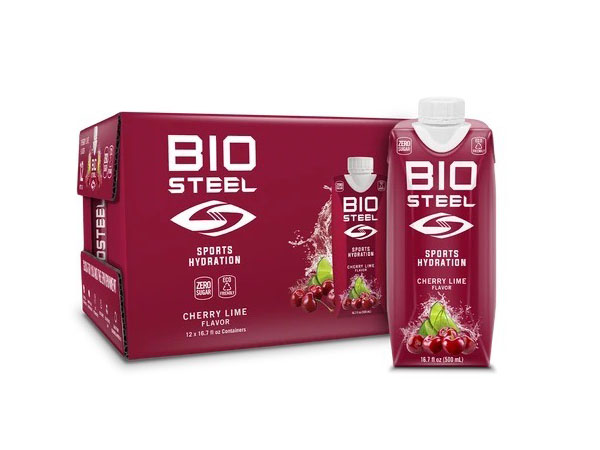 BIOSTEEL EXPANDS. Meanwhile, Canopy Growth owns sports drink challenger BioSteel, which added almost 15,000 retail US outlets including at Albertsons, Food Lion, Giant Food, Publix, Stop & Shop, Rite Aid and Sheetz, according to the company. More accounts will be announced soon as shelf resets are underway, Co-founder John Celenza said in an interview. The brand reached all-commodity volume (ACV) of 10.3% as of late January, according to the company. That’s up from almost 5.0% last July. Celenza previously targeted 40% ACV by late May of this year. Celenza said the brand hasn’t struggled with supply chain shortages or been forced to hike pricing to retailers. As for lineup changes, BioSteel has just added a Cherry Lime flavor, in addition to regional flavors centered on the home basketball courts of the Miami Heat and LA Lakers. Two months ago, flavor-specific 4-packs featuring NFL quarterback Patrick Mahomes and professional soccer player Christen Press were added at Publix. While the brand sells a CBD version in powder form in Canada, products in the US do not contain the ingredient.

ANALYST VIEW, CANOPY GROWTH. In a recent report, Consumer Edge Analyst Brett Cooper said spring shelf resets at major US retailers will offer a “better picture of how much penetration Canopy has been able to achieve in its first real push in the US.” He said Canopy’s US consumer packaged goods portfolio is a key factor in the company’s growth prospects and profitability. Looking at BioSteel specifically, Cooper said the sport drink’s grace period to prove itself from a velocity standpoint may run out with upcoming shelf resets. “Canopy probably has through mid-2022 to prove the brand has promise,” he said.